Hours after a federal judge ordered Texas officials to reissue voter materials with more positive language about the Voter ID requirements, the League of Women Voters of the San Antonio Area hosted a forum to discuss the requirements for voting and implications for the Nov. 8 General Election.

The Sept. 20 forum at San Antonio Central Library was held in collaboration with the American Constitution Society's local student chapter. (Scroll down to replay video of the forum.)

Panelists at the forum said the state’s restrictive laws and court rulings make it hard to say what the future holds. "There was a simpler time before (the 2011 voter ID law) passed," said Kauffman.

The Fifth U.S. Circuit of Appeals ruled earlier this summer that the state's controversial 2011 voter ID law was not compliant with the Voting Rights Act. The law had required voters to have one of seven acceptable forms of ID at a polling place.

A federal judge on Sept. 19 ordered Texas officials to edit and reissue voter education materials. For now, much of the voter education campaign states that voting without a government-issued ID, involving signing a specific document, is open only to people who are not able to obtain an ID.

U.S. District Judge Nelda Gonzalez Ramos ruled that the language must be softened and emphasize the “opportunity” to vote a provisional ballot, which can be done without without a government-issued ID as long as the voter has a registration card or utility bill, paycheck, bank statement or other government document displaying her or his name.

Still, election administrators statewide have had to scramble to comply with the federal court's original ruling over the summer, but then go by what state officials were distributing in the way of voter education.

"The election is seven weeks away and, from a management standpoint, we can't print anything because it may change," Bexar County Elections Administrator Jacquelyn Callanen said to the panel. "The state is going to have to come through and pre-clear” the voter education materials.

Callanen expressed some concern that it will take some voters in early and Election Day lines, on Nov. 8, to figure out their status before they cast a ballot.

"We're trying to mitigate the time it will take," she added.

Henry Flores, of St. Mary's University, said the 2011 voter ID law and the attempts to reinforce it are in a long line of methods in which the state of Texas has used to limit certain communities from voting.

"The Voter ID law we have now is the latest iteration of racially discriminatory barriers and is part of Texas historical culture," said Flores at the panel. "Texas is a racist politically cultural state." Flores continued with a blunt assessment: "It will do anything to create barriers to prevent Latinos, African Americans, Asians from participating in the political process."

Recalling being interviewed by a reporter about the legal fight over voting rights in Texas, Flores said it's not necessarily about racism.

"Racism is an excuse -- what it is is the old regime doesn't want to let go of political power," he added. Voters' rights advocates say such voter-suppressing laws aren't targeting only people of color.

Low-income residents, the elderly and disabled, also, are at a disadvantage because they cannot easily obtain an ID that the 2011 law would find acceptable at the polls.

Nina Perales of MALDEF,  briefly outlined a history of laws and rules the state has institutionalized to limit voter participation.

The poll tax, Perales said, was particularly effective as it allowed only a slight percentage of Hispanics and blacks to vote. The idea, she added, was many low-income individuals had little choice between paying a tax to vote or ensuring their family had enough to eat for the week.

Even after the poll tax was struck down, the state has imposed other restrictions of some kind.

"Every single decade, through this amazing lack of institutional memory, kept doing the same thing over and over," she added.

Judge Ramos has scheduled a hearing for January on the case. State leaders pledge to redo the law when the Texas Legislature reconvenes in January.

Satinder Singh of the ACLU said Texas admitted in its appeal of the case that some people might feel the voter ID law discriminatory, but the state said that was never its original intent.

Singh explained the state has maintained the law was meant to "protect the integrity of the ballot" and demand picture IDs to deter voter fraud at the polls.  The state, Singh added, wanted to battle mail-in voter fraud, but noted most people who mail in their ballots are typically white, older and more involved in politics.

David Saleh Rauf, the Express-News and Chronicle reporter covering state politics, said if the judge in January finds discrimination as intent, "the law gets shot down immediately." He said it would be a “footrace” between the court and the Texas Legislature to propose remedies for the law.

Rauf noted he and his media counterparts have had a hard time keeping pace with the recent changes, claims and legal battles concerning voters' rights in Texas. He urged people to stay educated by keeping close watch of what the state does, especially as the Nov. 8 election approaches, and what voter mobilization groups share in the way of information. 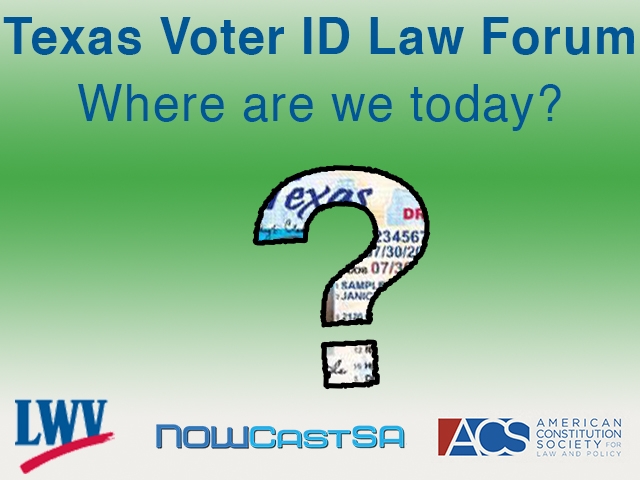