During National Hispanic Heritage Month (Sept. 15 – Oct. 15) the San Antonio Public Library (SAPL) recognizes the achievements and contributions of Hispanic and Latino Americans to the American story. This year, SAPL was awarded a competitive Latino Americans: 500 Years of History grant from the National Endowment for the Humanities (NEH) and the American Library Association.  As part of the grant, the Library will screen episodes of the six-part documentary film “Latino Americans,” created for PBS. The award-winning series chronicles the history of Latinos in the United States from the 16th century to present day.

On Tuesday, Oct. 6, SAPL will screen the hour-long documentary episode “War & Peace” at 6:30 p.m. (scroll down to watch the episode now). World War II is a watershed event for Latino Americans with hundreds of thousands of men and women serving in the armed forces, most fighting side by side with Anglos. In the Pacific, East L.A.’s Guy Gabaldon becomes a Marine Corp legend when he singlehandedly captures more enemy soldiers that anyone in US military history. But on the home front, discrimination is not dead: in 1943 Anglo servicemen battle hip young “zoot suitors” in racially charged riots in southern California.

At approximately 7:30 p.m., after the screening of "War and Peace," a diverse panel of scholars including Dr. Patricia Portales from San Antonio College, Dr. Marianne Bueno and Dr. Mario Longoria, will discuss and elaborate on several topics and themes as it pertains to Latinos in the military. You can watch the discussion live or replay the video later right here on this page.

For more information on the program, contact Candelaria Mendoza at Candelaria.mendoza@sanantonio.gov or call 210-207-2625. 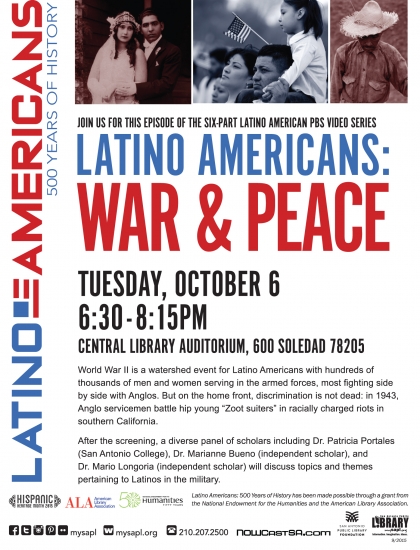