Webcast: Why Enroll Your Child in Pre-K?

REPLAY VIDEO: Join NOWCastSA from 10 a.m. to 11 a.m. on Thursday Feb. 27 as we host and webcast a Pre-K Summit at Cafe College to launch a media campaign to help young parents understand the value of early childhood education and develop strategies to make parents aware of the opportunities available to them.

The summit is free and open to the public, and the webcast will be available right here on this page so you can participate live or replay the video later.

With support from the Annie E. Casey Foundation, NOWCastSA produced a series of mobile-friendly bilingual YouTube videos explaining how quality Pre-K helps children succeed in school today and sets them on a lifetime path toward better physical and financial health.

The "Why Pre-K?" media campaign will be launched at the summit, which features a panel of San Antonio early childhood education champions:

Panelists also include NOWCastSA Journalism Interns Martha Reyna and Destinee Estrada, both juniors at Travis Early College High School, who, under NOWCastSA's guidance, did the research, script-writing and voice-overs for the videos, in the hope that a peer-to-peer approach will make the videos more relevant and effective with young parents.

The Summit will build on a continuing community conversation about the importance of early childhood education and discuss strategies for raising parents' awareness (click here to replay video of Data on the Impact of Early Childhood Development).

San Antonio gained national acclaim after voters in 2012 approved an 1/8 cent sales tax designed to provide quality Pre-K for 22,400 four-year-olds over an eight-year period.  The measure was sponsored by Mayor Julian Castro and endorsed by many other community and business leaders, including USAA President and CEO Maj. Gen. Josue Robles, Jr., as shown in this video by the Robert Wood Johnson Foundation.

The need for the "Why Pre-K" project was underscored after reports that slots in Pre-K classrooms in San Antonio were going unfilled.

Thousands of San Antonio children are eligible for free or low-cost Pre-K programs, but their parents have not enrolled them in classes.

"Our theory is that young parents in San Antonio don't have enough information to understand the benefits of Pre-K," said NOWCastSA Managing Director, Charlotte-Anne Lucas. "We're going to get that information in their hands by distributing these mobile-friendly videos in places where young parents get their news, including  YouTube and Facebook."

The "Why Pre-K" videos demonstrate that quality Pre-K  has immediate benefits for children by getting them ready for kindergarden and getting them ready to learn. Numerous studies, including research on children in the Eastside Promise Neighborhood by Trinity University professor Christine Drennon, shows that students who attend Pre-K are much more likely to keep up with their classmates and be reading at grade level when they are in third grade.

According to data by Drennon and others, reading at grade-level in third grade makes a child much more likely to keep up with classmates, stay in school and graduate from high school, college-ready.

NOWCastSA's interns included research from the Bureau of Labor Statistics and the U.S. Census, compiled by the Federal Student Aid program of the U.S. Department of Education showing that high school graduates today earn more than half a million dollars more over their lifetime than high school dropouts (see inforgaphic right by TG's Adventures In Education).

The same research showed graduates are more likely to be employed. Unemployment among dropouts is 14.1 percent, compared to 9.4 percent among high school graduates.Finishing college would add another $1.5 million in lifetime earnings, and among college graduates, the unemployment rate is only 4.9 percent.

The "Why Pre-K" videos also tie in data from a significant report by the Robert Wood Johnson Foundation, Time to Act: Investing in the Health of Our Children and Communities, which said children have a greater chance of achieving a lifetime of good health if they have a quality early childhood education. That report, which praised San Antonio's efforts, called for universal access to quality Pre-K programs for all children by 2025. 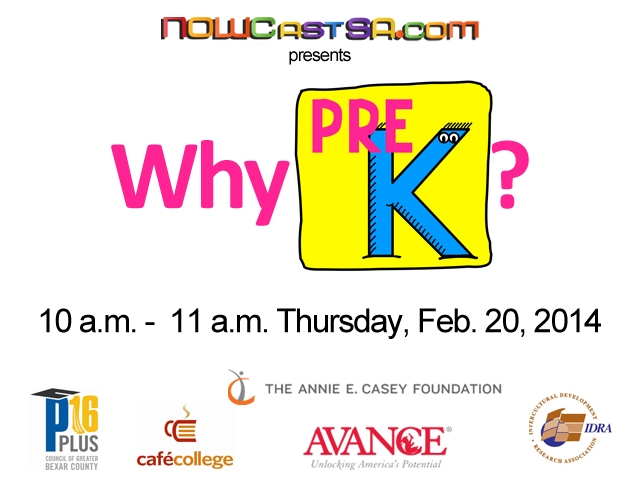