What's Next for "the People's Park"?

Editor's Note: This column was originally published in the October 2016 issue of LOCAL community news. It has been republished here with the permission from the author and publication.

With a divisive, nasty national election right round the corner it’s hard to focus fully on a local election that’s more than six months off. But the City of San Antonio bond election coming up next May is likely to affect most folks in and around the city as much, if not more than, the winner of the presidential cage fight.

The 2017 bond election will be the largest in San Antonio history – a whopping $850 million bucks worth of projects. Voters will say yea or nay to five separate parts of the bond: improvement of city streets, sidewalks and bridges, drainage and flood control, parks and recreation, facilities, and neighborhood improvements.  Over the next few months, five citizen's bond oversight committees – one of each section – will debate, massage and refine more precisely how the money in each part of the proposal will be spent.

Voters can make a difference by staying involved and informed about the bond. If you think plain old citizens can’t make much of a difference when it comes to multi-million-dollar city projects, consider the recent case of the Brackenridge Park Master Plan.

As the bond issue is allocated now, the parks and recreation section proposal includes $19 million for improvements to Brackenridge Park. That’s long overdue. The jewel of a park, comprising nearly 350 acres in the heart of the city, is sadly dilapidated these days. A year or so ago, the City Council designated around $250,000 for a team of architects to draft a preliminary Master Plan to improve the park.

There were already a couple of Master Plans for Brackenridge gathering dust – one from 1979  and another done in 1997. (By interesting coincidence, these three plans to breathe new life into the park have come at exactly 18-year intervals. But I digress.) The new architectural team considered those, as well as the booming Broadway “cultural corridor,” with canyons of new hi-rise housing near downtown and the Do-Seum and Witte expansion by Brackenridge Park.

But after a couple of small community meetings on the new Master Plan, neighborhood activists took to the internet and social media to stir up a hornet’s nest over some major changes. First, most roads into the park were to be closed to cars, and a couple of large multistory parking garages were envisioned for park visitors, along with shuttles to carry folks into the park. While details weren’t included in this plan, community activists put two and two together. It’s likely that both the shuttle and the parking would wind up costing maybe more than a little for families out to enjoy a picnic or celebrate a birthday.

After former City Councilwoman Maria Berriozabal and the Esperanza Center got involved, hundreds of folks started demanding more opportunity to comment on the plan. The protest swelled until the city finally started listening. Over and over, they heard that people wanted the park cleaned up and renovated, but not so fundamentally altered. Brackenridge has always been “the people’s park,” after all. Generations have driven through the park to relax, picnicked and played there. It forms the backdrop for life memories.

This time, the people who fought city hall did make a difference. The most offensive parts of the plan were removed. The parts most folks supported remain. Those include restoring the historic Spanish acequia, creating interpretive exhibits, stabilizing the eroding river banks and restoring wonderful historic structures such as the old pump house and the donkey barn. And of course, cleaning up and maintaining the park itself.

Lynn Osborne Bobbitt is Executive Director of the recently formed Brackenridge Park Conservancy, a nonprofit group to provide private funds and stewardship for the park. Using donations and grants, the group is opening an office and information center in the former concessions building in the heart of the park. They’re also working on plans to restore or improve many important areas in the park, including Miraflores Park on Hildebrand at Broadway, now a part of Brackenridge. They’re giving free guided tours to community groups to talk about tentative plans for the enchanting old property.

While the Conservancy was consulted about the Master Plan, they weren’t in charge. Bobbitt suggests a fully developed master plan could, and probably should, take several years to develop. That’s surely preferable to throwing a lot of money at a quick – and unpopular -- fix.

Going forward, the Conservancy – and the public in general – should have a larger role in determining the future of Brackenridge Park. Well spent, that $19 million bond money could be a great start, as the Conservancy grows and develops new initiatives. To get a better picture, check out videos of the Master Plan meetings, and my video tour of the park with Bobbitt at NOWCastSA.com.

I’d like to know what you readers remember most fondly about Brackenridge Park, and what changes there you would like to see. Email me with your thoughts, at syerkes@local community news.com, and I’ll share them. 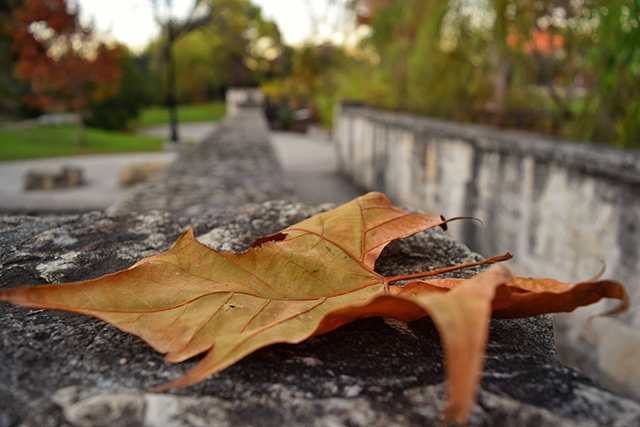