But will it have teeth? Fate of Housing Policy Framework lies with accountability

When the Mayor's Housing Policy Task Force members briefed the SA Tomorrow Comprehensive Plan Committee in June, only one recommendation was different from similar housing studies over the last 30 years: Implementation.

(Scroll down to watch complete video or click on each speaker’s quote to watch their remarks.)

“It starts with implementation. It doesn't matter how many studies and reports you create. If there is not an implementation plan, it will not get done,” said task force member Maria Antonietta Berriozábal, a former city councilwoman.  She knows. Her research found the same recommendations have been made for the last 30 years.

“In 1997, the city created a Master Plan, another in 2009, then SA 2020, then SA Tomorrow. The same recommendations were made over and over didn’t get implemented. So we decided a major part of our report is how do we implement this. We’re making sure the city has the capacity and the resources to implement what has been decided," said  Berriozábal.

District 4 Councilman Rey Saldaña, a member of the SA Tomorrow committee, recalled the idiom, “if it is not measured, then it doesn’t get done,” and said the accountability needs to be at the highest level, the city manager herself.

“If our city manager does not have a line item on her metrics for success grade assessment of her job that deals with housing and the recommendations that come from this task force, then we may have failed because if it is not driven from the top level of this administration then it may get lost,” he said.

At the outset of the June 11, 2018, meeting, Task Force Chair Lourdes Castro Ramirez described how the group created comprehensive policy priorities and an implementation plan on housing availability and affordability for the city's diverse population. (Click here to watch her briefing.) (Cilck here to read the entire Housing Policy Framework)

The overarching themes are:

Housing costs are outpacing incomes across the city, she said. One-third of all households in city are “cost-burdened,” and pay more than 30 percent of their income for housing, said Castro Ramirez. She said  problem affects 48 percent of renters and 21 percent of homeowners.

Task Force member Jim Bailey, an architect at Alamo Architects, said the city needs to build 20,000 affordable housing units over the next few years “In order to stabilize the housing market in San Antonio and keep things from getting worse.”

Barbara Witte-Howell, a member of the City/County Joint Commission on Elderly Affairs, said the issues concerning seniors have been dropped by the task force. “One of every five San Antonio residents are seniors, over the age of 60,” she said. Witte-Howell said senior issues got subsumed under people with disabilities, despite that only 17 percent of seniors are disabled. “It is unfortunate that people think that everyone who is a senior is disabled,” said Witte-Howell.

District 9 Councilman John Courage, a Comprehensive Plan Committee member,  said San Antonio needs 150,000 additional housing units and should rehabilitate 50,000 homes in the city today. Courage said he is also concerned about tenants’ rights. “We need to think about the unintended consequences of improvements in the city and county… are they (tenants) going to be able to enjoy the improvements or will they be forced out?”

Ramiro Castro said the Task Force's process was driven by the existing situation and population projections for the future. “What do we need to do to ‘course correct’ and address the problem before it becomes a larger crisis,” she asked.

Watch complete video of the briefing and conversation here: 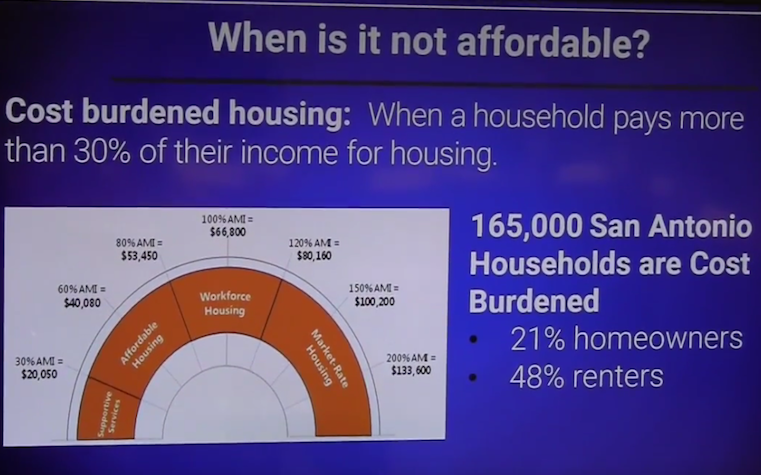