Tobin Hill neighborhood history, character is under fire by city and developers

Two 100-year-old storied homes in San Antonio’s Tobin Hill neighborhood are being demolished after a city councilman invoked an ordinance under the city signage code to block landmark protection sought by the community and the city Office of Historic Preservation.

The clash between the community, the developer and the city bureaucracy erupted at the July 17 Historic Design and Review Commission (HDRC) meeting, prompting the panel to initiate a survey of the remaining historic and significant buildings in Tobin Hill.

Tobin Hill, one of the city’s oldest neighborhoods, is just north of downtown and includes the Pearl Brewery, much of the St. Mary’s strip, and San Antonio College.

“We are under fire,” said Ricki Kushner, Preservation Chair of the Tobin Hill Community Association. “It's getting very very difficult to say that something, that a street is historic in Tobin Hill,” she told the Historic Design and Review Commissioners. In 2019, the HDRC heard 31 cases involving potential demolitions from Tobin Hill, she said.

“Tobin Hill has faced demolition after demolition in our neighborhood over the past two years,” said Anisa Schell, the Secretary of the Tobin Hill Community Association and a member of the Tier 1 Neighborhood Coalition. “We continue to see our residential core eroded and replaced with cheaply and quickly built housing that is sold for top dollar. The housing that is being built is not affordable or workforce housing. It is simply market rate, designed to maximize profits in the short-term. We are losing Tobin Hill’s unique character and history with every demolition,” she told the panel.

In April, the Historic Design and Review Commission recommended historic landmark designation for the houses at 307 and 311 East Evergreen St. after hearing testimony from proponents including the San Antonio Conservation Society, the Tobin Hill Community Association and staff of the Office of Historic Preservation. The property owner, on whose behalf demolition permits were sought in February, opposed the historic designation.

But on June 6, the San Antonio City Council overruled the Historic Design and Review Commission after District 1 Councilman Roberto Treviño made a motion to deny the historic designation. Treviño read from a letter his office had emailed Tobin Hill residents a week before the meeting: “The properties located on East Evergreen (309/307) are situated on the commercial corner of the McCullough corridor. This is an area that would be appropriate to accommodate future growth and development,” the letter said.

In fact, the homes on East Evergreen are not on the corner. They sit one lot removed from McCullough Avenue.

The East Evergreen Street properties are listed on the San Antonio zoning maps as within the McCullough Ave. Corridor Overlay Districts - or UC-5. “McCullough corridor” and “UC-5” is a term which comes up only in the Code of Ordinances under the chapter regulating signs. Article 7 of the Signs ordinance, which dates back to 1992, established six Urban Corridors, “To enhance the appearance and economic viability of urban corridors within neighborhoods,” among other things. (Read the ordinance here) The UC-5 designation is not listed under any San Antonio zoning, planning, or land use regulation codes.

One neighborhood leader said Treviño used the little-known ordinance as a way to assist the developer in the demolition process. “Besides the historic significance, which is substantial, besides their location… there was overwhelming community support for saving these houses,” said Anisa Schell. “Councilman Treviño’s job is to represent the community. Not developers.”

On July 16, after the Office of Historic Preservation approved the demolition request, deconstruction began 309 East Evergreen. Tobin Hill Community Association’s appeal was rejected by the City because the City Council vote apparently precluded any appeals process. 309/311 East Evergreen, also known as “That Place Off Evergreen,” has since been demolished.

The conflict began in February 2019, when Evergreen Street Holdings LLC applied to the city’s Office of Historic Preservation to demolish two properties, prompting community leaders to request a review of historic significance by city staff to research the Craftsman-style homes.

After months of research, meetings and testimony, the Historic Design and Review Commission, the San Antonio Conservation Society, the Tobin Hill Community Association and the Office of Historic Preservation concluded the homes, built around 1910-1912, had significant architectural and cultural significance.

The two-story house at 309/311 East Evergreen St. was a performance and recording space known as That Place Off Evergreen. “It was built in 1910 as multiple-resident apartment building, and remained so for its entire history,” Tobin Hill's Kushner told the Historic Design and Review Commission. “Since the time of its construction, the Stinson house has been subject to very little alteration or addition preserving its condition,” she said. The later tenants “opened their doors to neighborhood artists and musicians,” she said.

Both homes were the last remaining residential structures on the block.

The Historic Design and Review Commission approved the historic landmark designation by a 5-1 vote on April 17, 2019.

But the briefing never happened. When the items came up for consideration on June 6, Councilman Treviño read from a prepared statement:

“Development should be accommodated on the corridors and in commercial mixed-use areas and not in the neighborhood cores,” he said. “I understand that there are members of the community who would prefer a different decision on these matters,” he continued, “but I would encourage those individuals to continue to advocate for their communities and bring forward their findings and perspectives.”(Watch video of District 1 Councilman Trevino’s remarks on video here.)

The lack of background information drew raised eyebrows from Mayor Ron Nirenberg before the vote. “I have to say that we did not get a briefing on this item,'' said Nirenberg. “There’s a lot that needs to happen here with regard to designation… I would love to know the compelling reasons underneath by which the designation is being sought.”
(Watch video of the entire June 6 City Council Meeting here.)

All present at the Council meeting followed Treviño’s lead, and the historic designation was unanimously overruled. District 6 Councilman Greg Brockhouse was absent.

On July 16, the Zoning Commission approved changing 307, 311, and 315 East Evergreen properties zoning to Light Infill Development -  or IDZ-1 - which would allow, among other things, up to 10 residential units to be built on each property. Patrick Christensen, representing  the owner of the E. Evergreen properties, used Trevino’s reasoning as an example, saying rezoning was reasonable because the properties lie within the McCullough Avenue Urban Corridor.

The Zoning Commission recommendation will come up for a final vote at City Council when it reconvenes in August.

After the June 6 City Council vote, several Tobin Hill residents vented their frustration at the HDRC’s Citizens to be Heard session on June 24. They asked the Commission to add an agenda item at the next meeting to consider creating a new historic district to preserve the buildings at risk for demolition.

Speaking on behalf of Stephen Fonzo, a Tobin Hill resident, Kushner said: “This building is on a major corridor and is somehow less important to preserve? The very definition of historic districts has been inconsistent internally and with regard to external standards. It’s arbitrary and capricious.” (Watch video of the Citizens to be Heard at the June 24 Historic and Design Review Commission here.)

At the HDRC meeting on July 17, the item was on the agenda. Rick Schell showed the Commissioners two maps, one with historic and significant buildings and districts, the other with locations of demolition requests.

“In the next six months, I anticipate that this number [of demolitions] that’s up here (see images presented at HDRC meeting below) will probably double based on the number of cases that I’ve seen, based on the information that I’ve seen just this year,” Schell said.

After hearing from the residents, the Commissioners asking the Office of Historic Preservation staff to survey the historic and significant buildings so the community can consider expanding the historic district in Tobin Hill. 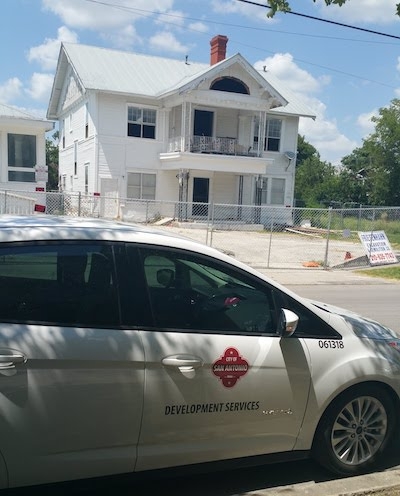