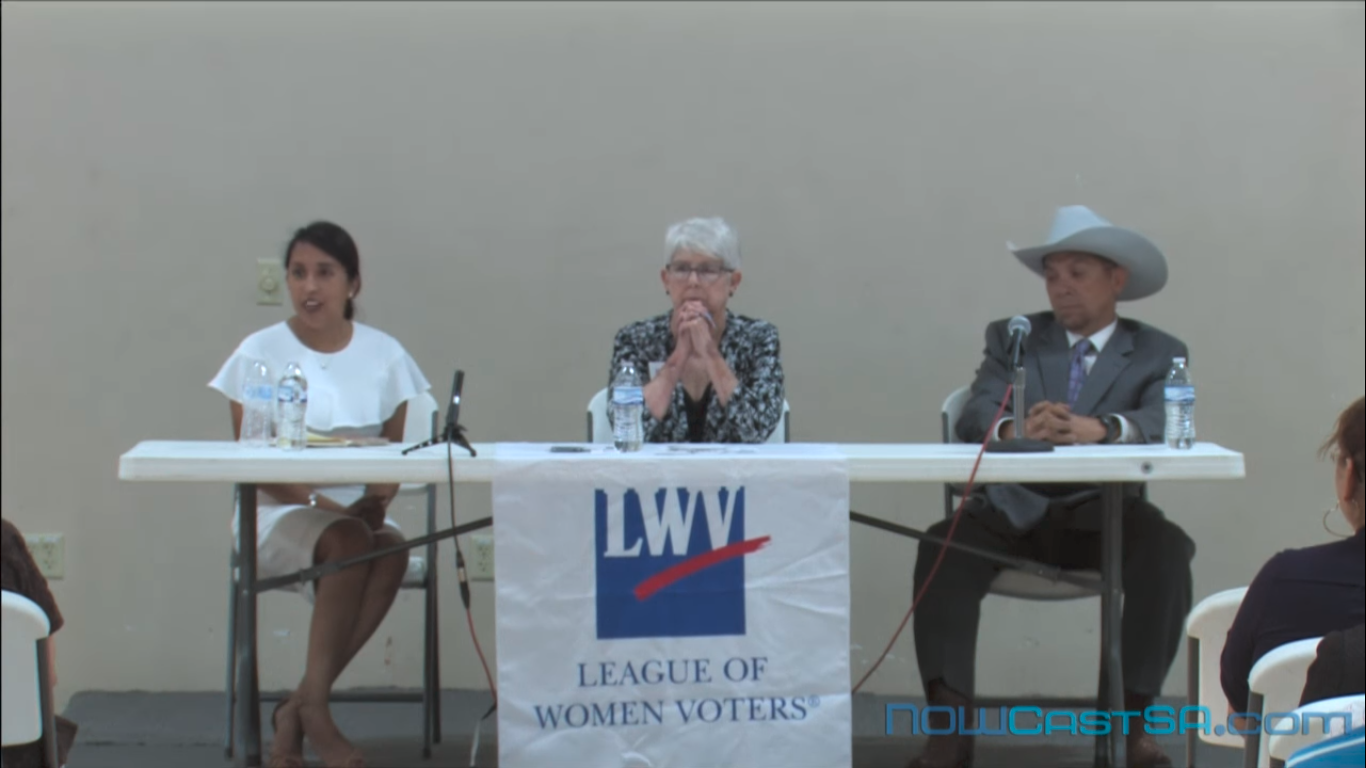 Runoff candidates for City Council District 4, Adriana Rocha Garcia and Johnny Arredondo, took questions from the online and in-person audience in a forum moderated by the League of Women Voters of the San Antonio Area on May 21 at St. Bonaventure Church Activity Center. (Scroll down to replay complete video of the forum.)

The candidates had sharply differing views on topics, including climate change.

Referring to San Antonio's Climate Action Plan, Garcia said: “When I tallied up the numbers and the current climate action plan as is, I was definitely afraid that it might hurt the pocketbooks of District 4, and so I’m currently in the process of trying to get exact numbers so that we can see how it would affect the residents.” Jump to Garcia’s answer in the video by clicking here.

Referring to climate change, Arredondo said: "The number one source of climate change is NASA. NASA’s satellites in the air actually measures climate change. NASA put out a study in 1950-- between 1950 and 1990. That was the hardest time period for climate change… We can’t just be throwing money away as a city into science that is just part of the national talking media.”  Jump to Arredondo's answer in the video by clicking here.

When the candidates were asked about San Antonio’s plan to eliminate coal-derived power by 2025 Garcia supported it and Arredondo opposed it.

“We need coal. We need fossil fuels in our life,” Arredondo said. “The day that we can fly an electric plane from San Antonio to Europe, then maybe I will go ahead and consider viewing it at that time,” he said. Jump to Arredondo's answer in the video by clicking here.

Garcia said it "might be a hefty goal,” to eliminate coal from electricity generation  by 2025. “I do know that we have responsible corporate citizens like Valero and NuStar who have given lots of money and scholarships to students in the South Side that we can’t just run off,” she said. Jump to Garcia’s answer in the video by clicking here.

Early voting in the runoff election is May 28 to June 4. Election Day is June 8.

Watch the full forum below, or click on a question below to jump to that part of the forum:

What do we expect to see in the first 90 days from you as a representative?
The Climate Action and Adaptation plan is currently at a standstill. What are some aspects you hope to improve or expand on? How do you think San Antonio should address climate change?
In 2020, voters will be asked to maintain an already existing tax to fund Pre-K for SA. Would you support Pre-K for SA this upcoming election? What are your thoughts on the program?
As a representative of the City Council, how will you work to ensure that residents of District 4 and all of San Antonio have access to mental health services, and what are your plans for the homeless panhandlers that have drug problems?
Would you support separated bike lanes that include a physical barrier for safety? What improvements do you plan for streets and sidewalks and lighting for streets?
Do you think San Antonio should continue to be a sanctuary city, and do you think San Antonio taxpayer money should be given to groups whose main purpose is assisting people in the US illegally?
District 4 is home to white collar and blue collar workers with humble beginnings. What would you do to bring more jobs, confidence, and resources to an area that wants more opportunity, hope, and support to its communities? How would you position District 4 to be successful and not overshadowed by other districts north of I-90?
Would you be willing to include public school funding as a legislative agenda item? As you may be aware, there is a housing crisis here in town. Would you support a legislative agenda that includes rent control?
Do you support paid sick leave?
As a council representative, you will oversee a large budget. What is the largest budget you have overseen, and with what organization? Would you be willing to enact participatory budgeting in your district for your transportation or discretionary funds so that residents can vote on how to use the funds?
Do you support the community climate goals of shutting down the coal plants by 2025, no electricity generated by coal by 2030, and net zero by 2040? Do you support ConnectSA that includes advanced rapid transit buses? Would you be willing to rescind the ordinances that make homeowners responsible for the sidewalks in front of their homes and had the city replace all sidewalks?