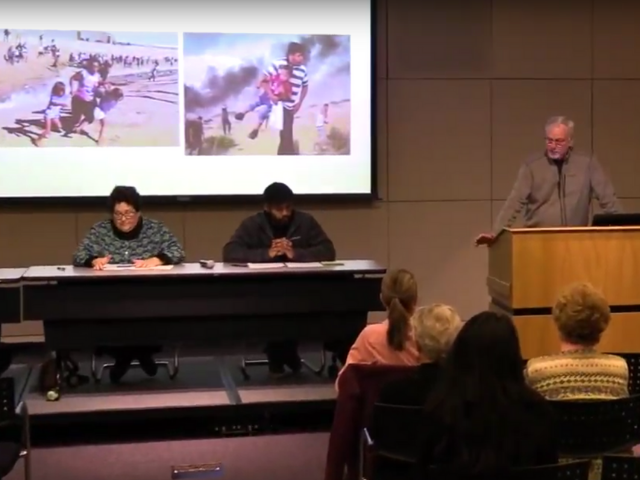 The policies and national rhetoric involving the United States and Mexico border is “strident and explosive.” President Donald Trump, whose demands for a border wall prompted the longest government shutdown in history, says there is a “growing and humanitarian and security crisis at our southern border.” Other experts say the crisis is either non-existent or manufactured by Turmp’s own policies.

During DreamWeek, the Jewish Voice for Peace organized a panel to discuss border issues and liken aspects of the debate to the Israel-Palestine conflict.

Replay video of the event, scroll down to read more:

“Everyone here today is familiar with the fence at the nearby border between the U.S. and Mexico—whether by proximity or by culture, kinship or by place of origin— our community is deeply involved and/or deeply affected by what is happening there,” he said.

Panelist Elaine Cohen, immigrant rights activist and member of Jewish Voice for Peace, said, “The crisis is the immorality of refusing to help those fleeing for their lives.”

Cohen has visited women at a women’s immigration detention center in Taylor, Texas, where she met women from throughout the world trying to seek asylum and opportunity in the United States.

“The reasons that drove them to leave their homes and family ranged form cartel taxes that impoverished, police and military pollution and corruption, toxic patriarchal traditions and violations of every kind. This is what they were fleeing,” she said.

Panelists Jovanni Reyes, a local activist and member of Iraq Veterans Against the War, pointed to the approximately 2,000 troops sent to the southern border recently, joining National Guard troops who have been deployed there since last spring.

“Just for comparison, there’s about the same troop level that is currently in Iraq right now, about 5,000 soldiers,” he said.

Other panelists from the event included Habiba Noor, an adjunct professor at Trinity University, and Alvaro Rafael, an artist and activist from El Salvador.

Noor spoke, among other things, about the power of the words being used to discuss immigration and immigrants without legal documentation.

“Language is extremely consequential...They’re not just words. It’s not just air,” she said.

Rafael, who has seen the violence in El Salvador firsthand, provided insight about how and why some people are fleeing from Central America countries.