Digital Divide: When going home means you can’t do your homework 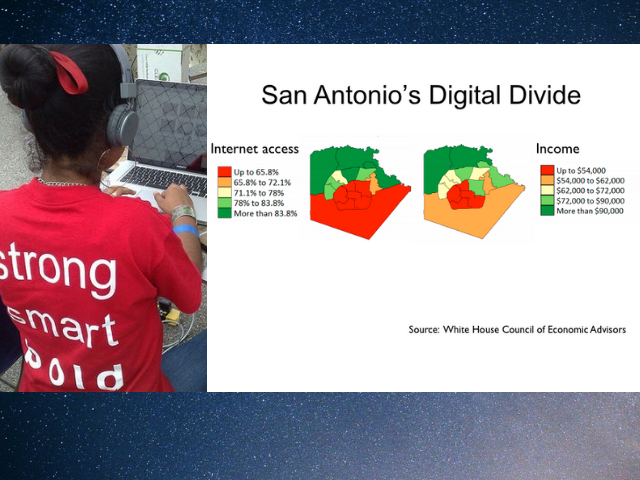 It was dark outside, and the fourth grade student’s grandmother was waiting in the parking lot to take her home from Girls Inc. San Antonio.

But the girl clung to her last minutes of Internet access, scrambling to print out her homework from a computer so she could complete the assignment on paper at home, where she has no Internet.

“The only way that the girl could do their homework that night, get into the worksheet, was connectivity,” said Lee Rosenauer, President and CEO of Girls Inc.

The online pages couldn’t be printed, and a screenshot wouldn’t work, perhaps because of copyright restrictions. Eventually, Rosenauer used her own phone to take a picture of the worksheet and printed out the photo.

In San Antonio, the Digital Divide - the line between the Internet haves and have-nots - is stark and wide.

Such real-life examples of Internet inequities led the conversation during a lively panel discussion during the Digital Inclusion Alliance Summit. (more from the day-long summit here )

Figueroa and Rosenauer both said they see the digital divide affecting young women’s ability to excel in schools and jobs. The Martinez Street Women’s Center  and Girls Inc. are nonprofit organizations dedicated to the the betterment and empowerment of women and girls in the community.

“What (the Digital Divide) means to me is simple: access and opportunity,” Rosenauer said.

In 2017, San Antonio was ranked as the most economically segregated city in the country and that mirrors who has access to broadband Internet who doesn’t. One in four households in the city don’t have access to the Internet and, according to the Digital Inclusion Alliance of San Antonio, most of the areas with limited access live inside Loop 410, the city’s less affluent, urban core.

At the Martinez Street Women’s Center, Figueroa said she sees the same kinds of struggles. There, staff and volunteers use the Center’s Internet to help people apply for jobs or connect with necessary city services. Nearly all of it is done digitally.

“In addition to that, what the digital divide looks like to me is a denying of the right to communicate properly, or with the human right of communication,” she said.

Figueroa said the city of San Antonio has a long history rooted in policy makers’ decisions to invest in certain parts of the city and not in others.

“This is just another iteration of that same treatment and lack of investment in certain communities,” she said.

He said that without an educated workforce and without easy access to the internet, businesses and companies will not be willing to invest in coming to the city.

“I think the point is that what is at stake is the future of San Antonio,” said Ramos.