By Edmond Ortiz
The 2019 South by Southwest (SXSW)  festival featured several San Antonians leading conversations about how best to enhance life for the aging population, tackling the opiod crisis and improving medical care for individuals. 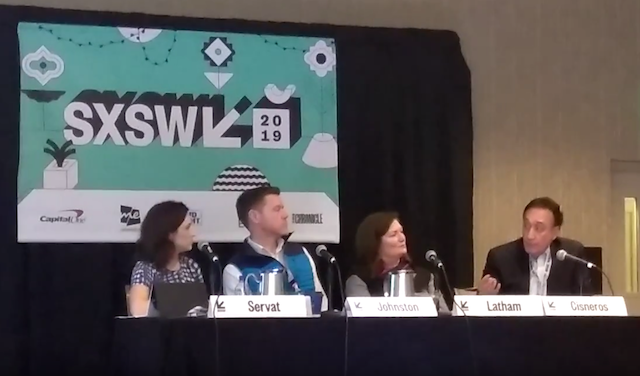 Cisneros, in a panel discussion, talked about the Helpful Village Movement where older adults remain in virtual connection with each other.

Such relationships result in tips and referrals on things such as ride-shares, finding a good physician or a handyman — things and individuals who can help older adults to stay independent while aging in place. The Helpful Village movement has sprung up in a few dozen U.S. cities.

Cisneros has tried fostering the Helpful Village concept in San Antonio, but ran into obstacles, primarily the digital divide. The disparity of income makes things harder for many older adults to tap into the positive power of the Internet and smartphones.

“That particular solution is not going to work across the board in San Antonio, but we have other things we’re doing to address those problems,” he added.

Cisneros and fellow panelists did, however, discuss BoomTown, a new community model that’s getting more attention. BoomTown advocates ask cities whether they can employ smart design and planning to ensure elders are connected with all facets of their existing community, from grocery shopping and transportation to health care and recreation.

The panelists here also agreed there’s opportunity for innovation where products and services can be created or evolved to better serve seniors and their needs.
Cisneros said when he was President Clinton’s Secretary of Housing and Urban Development, he learned lessons from major events such as the 1994 Northridge, California earthquake.

The lesson? Cities and neighborhoods are recyclable and they adapt to change.

“The wonderful things about cities is that they won’t die as long as we recycle them and catch up with the economy in the heat of the moment and when we prepare for the future,” Cisneros added.

Many people in the private and public sectors see potential in the emerging technology of blockchain: better tracking prescription and population health data could help stakeholders to focus on resources, places and organizations that are failing or succeeding in fighting opioid abuse.

Mayes said the local task force, launched in 2017, revealed how relevant agencies addressing this issue were not communicating well with each other, much less sharing vital sets of data.

“It would be helpful in a high-intensity drug-trafficking area to have the San Antonio Fire Department’s data and someone from the fire department said, ‘We don’t want an extra hoop to jump through’,” Mayes explained.

Local elected officials eventually got involved and compelled the fire department and other agencies to begin sharing their data to help the task force. 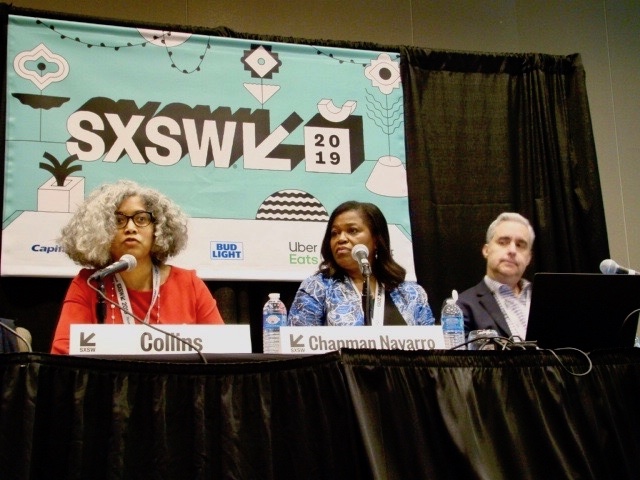 Chiquita Collins, UT Health San Antonio’s vice dean for inclusion and diversity, was on a panel about precision medicine, where physicians base a patient’s treatment on that person’s genetics, predisposition and even environmental background.

Collins was joined on the panel by Rene Salazar, a graduate of UT Health San Antonio’s School of Medicine. He’s currently assistant dean for diversity at Dell Medical School at the University of Texas at Austin.

Collins explained that many medical practitioners in the 19th Century and early 20th Century did no favors especially for non-caucasian people whom they either treated for illness or preexisting conditions or subjected to misinformed, painful medical experiments.

As a result, Collins said, physicians for the longest time have misunderstood how specific maladies affect individuals in specific ethnic communities and socioeconomic statuses. “If we don’t address some of our ugly history in a way that’s constructive, we are going to repeat that,” she added.

Collins and Salazar said there have been vast improvements here and personalized medicine has potential to help improve diagnosis and outcomes of individuals.
But, they warned, some health care providers tend to maintain racial and economic biases that may thwart proper diagnosis and treatment.

Dr. S. Gail Eckhardt is helping to lead a different kind of medical program that targets the way professionals treat cancer patients. She’s the inaugural director of the LIVESTRONG Cancer Institutes. She previously was associate director of clinical research at the formerly named Cancer Therapy and Research Center.

Eckhardt sat on a panel about reimagining life with cancer. Eckhardt and fellow panelists said too often a person’s cancer treatment becomes so focused on the physical medical regimen that the patient’s overall well-being - emotional, spiritual, mental - gets overlooked.

Eckhardt and her counterparts promote a holistic approach to ensure a cancer patient maintains a semblance of positive quality of life. LIVESTRONG’s programs set out to achieve such goals.

“It’s a flipped model whereby instead of the focus being on the medical subspecialty expertise and the medical component, the focus is on the patient and everything feeds into that central core,” she added.

What happens when someone is struggling mentally or emotionally and contemplates suicide?

Two professors from St. Edward’s University, Melissa Alvarado and Kerrie Taylor, led a meetup about destigmatizing and coping with suicide.

Alvarado, a University of Texas at San Antonio graduate, and Taylor both are experienced counselors who have cared for individuals coping with mental health issues.

According to Alvarado, it was not all that long ago when institutions considered suicide a criminal act because, oftentimes, people casually say a person has “committed suicide” much like committing homicide. As such, suicide remains a something of a taboo in many parts of contemporary society.

Alvarado and Taylor said the first step toward destigmatizing the issue is to change the language. Instead of “committing suicide,” someone has thought of “dying by suicide” or has “died by suicide,” the professors said.

Alvarado and Taylor said an increasing number of care providers and government agencies seriously view mental health challenges as a public health concern, but there’s still a way to go in terms of employers and insurance companies offering adequate coverage.

They also said communication is always a two-way street between people struggling with issues such as depression and cyberbullying and their families, friends and associates. Alvarado said destigmatizing of suicide, or the consideration of it, helps to open up those vital lines of communication at a crucial time.