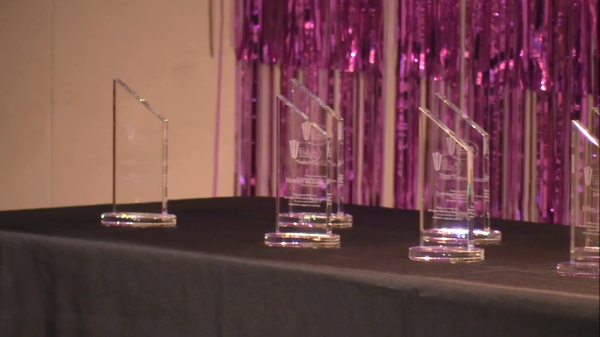 The ELLA award recipients are nominated by the community for outstanding volunteer work and dedication to the San Antonio libraries. This year was the third year the awards were presented.

Watch this video of the ceremony here and scroll down to read details about the honorees.

ELLA honoree Katy Flato was honored for her role as founder of the San Antonio Book Festival – a key partner of the San Antonio Public Library. The Book Festival, which celebrated its 7th year in April 2019, is the city’s top event for celebrating literature, books and the authors who create them. The free public event hosts 90 authors each year who speak from venues located across the grounds of the Central Library and Southwest School of Art and the event now draws in more than 20,000 attendees per year. The Book Festival has elevated the importance of reading, literature and libraries and has brought significant publicity to the San Antonio Public Library through the years.

ELLA Honoree Polleen Larkin is one of the most dependable volunteers at Great Northwest Library. She plays a key role in organizing library materials at a high circulation branch by shelving items and filling customer orders for holds and the circulating collection. She also is a significant contributor to children’s programming at Great Northwest Library. In fact, she recently performed at a singing and storytelling program to a crowd of over 100 kids! She is a true example of how volunteers can impact libraries and create memorable experiences to those they serve.

ELLA Honoree Gloria Malone served as a Library Board Trustee for 18 years before her death in 2019 at age 78. She was integral in bringing the Pruitt Branch Library at Roosevelt High School and Schaefer Branch Library to District Two, the district where she lived and volunteered her time as a tireless advocate for the importance of libraries. During her tenure, Gloria Malone contributed to launching 11 new library locations across the Library system as well as transitioning the system to a seven-day a week service; and increasing the budget by 126%. She contributed her leadership to the Library Board of Trustees by serving in the position of Vice Chair and Treasurer on the Executive Committee, giving generously of her time to advance the Library’s mission. Her contributions to the library and the San Antonio community will forever be remembered through the lives of individuals, children and families who benefit from the Library resources and services.

ELLA Honoree Linda Marquez is one of the most dedicated volunteers at the Johnston Branch Library. She is a retired teacher who volunteers her time to the Johnston Branch for whatever they need whether it’s executing a special event such as a Day of The Dead celebration or delivering interactive and engaging programs for children and teens. Linda Marquez has dressed up as Dr. Seuss and taught teens how to make corsages as well as everything in between. The Johnston library staff especially appreciates how she brings positivity and inspiration to the team and reminds everyone about the important work of library staff in the community.

ELLA Honorees Sally and Reuben Rendon's passion for the San Antonio Public Library has been demonstrated throughout the years. The Rendons have dedicated their life to public service and helping communities including libraries across the Westside and Southside, the neighborhoods they grew up and hold dear to their hearts.Fifteen years ago they founded the Las Palmas Branch Library Book Club, which is now one of the longest running book clubs in the Library’s history. They believe wisdom and strength can be found through the resources and programs of the Library which is their daily inspiration. They are actively involved on social media and through community centers such as the YWVA and Good Samaritan Center where they regularly share information about Library programs and services.

ELLA Honoree Jeffery Sullivan has presented dozens of programs of the “supernatural” kind throughout multiple San Antonio Public Library locations for the past ten years. Sullivan is the founder of Sixth Sense Paranormal, a group dedicated to the investigation, documentation, and study of paranormal phenomena and activity. He is also a professor for Alamo Community Colleges, and leads presentations on the findings of San Antonio ghost investigations. Programs offered by Jeffery and Sixth Sense Paranormal have provided new and unique learning opportunities for our community.

ELLA honoree Jordan Vexler Shannon has been actively involved with supporting the Library for many years both as a San Antonio Public Library Foundation member and as a volunteer of her time and talents to various library initiatives and projects. Her passion for the Library led her to serve as the San Antonio Public Library Foundation’s Board Chair from 2017 to 2018. During her leadership as Chair, the Foundation donated more than $1.8 million dollars to the San Antonio Public Library to use for resources, programs and events. Libraries have been central to her personal journey from her first childhood memories fumbling through picture books to endless hours studying in graduate school to taking her marriage vows at Mission Branch Library.

ELLA honorees Amy Garcia, Xitlalt Herrera-Salazar and Heather de Rojas are a group of exceptional local community members: The Catrina Ball 2018 Co-Chairs. Thanks to their contributing efforts, the Central Library was transformed into a Dia de Muertos “street party with a purpose” to raise funds for the San Antonio Public Library and specifically, the Latino Collection  & Resource Center. The second annual Catrina Ball, held in October 2018, attracted more than 800 people dressed in full Dia de Muertos fashions and was a well-talked about (and photographed) event throughout the community and social media channels raising the profile and importance of the Library. Thanks to the successful event led by the Catrina Ball Co-Chairs, the San Antonio Public Library Foundation was able to gift $50,000 to the Central Library’s Latino Collection and Resource Center.

ELLA honorees Isabel Ann Castro and Natasha Hernandez are the founders of international feminist zine, St. Sucia. A zine is a self-published work of original texts and images and to explain it in the words of Isabel and Natasha, zines are “everyone’s novels and newspaper… a place to put what won’t fit when we try to write it on a wall.” Together, they have carved a space for Latinx women to express their stories of identity, religion, gender and sexuality. Isabel and Natasha partnered with the Library in presenting the 2017 San Antonio Zine Fest, and additionally, presented several zine making workshops at the Library, inspiring others to create their own avenues for expression. By collaborating with Isabel and Natasha, the library has been able to attract new customers, introduce them to the Latino Collection & Resource Center and give voice to a new generation of authors and artists from historically marginalized communities.

Disclosure: The San Antonio Public Library is an in-kind financial supporter of NOWCastSA. A list of funders and donors can be viewed here. http://nowcastsa.com/content/funding