Republican U.S. Rep. Will Hurd to retire from Congress after holding on to a district Democrats are desperate to flip 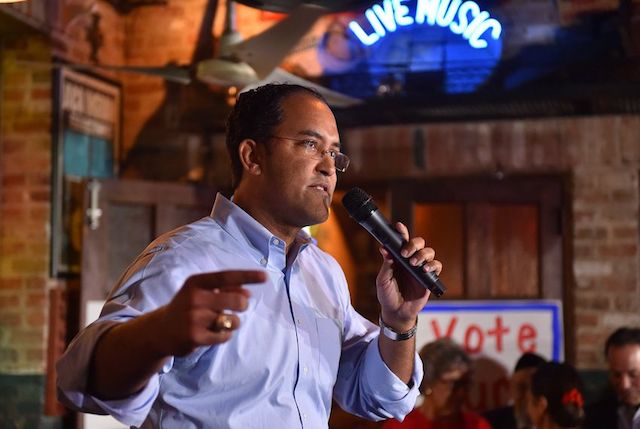 WASHINGTON — The U.S. House's last black Republican member, Rep. Will Hurd of Helotes, announced Thursday that he is retiring from Congress. President Donald Trump's racist comments about elected officials weighed heavily on Hurd, who has often spoken out against the rhetoric.

Hurd's unexpected retirement immediately sent shockwaves through the Republican Party — and elicited confidence from Democrats eager to win his sprawling district that stretches from just outside El Paso to San Antonio and includes a large portion of the Texas-Mexico border. Hurd is the third Republican Texas congressman to announce their retirement in recent days. U.S. Rep. Mike Conaway, R-Midland, announced his this week. U.S. Rep. Pete Olson, R-Sugar Land, announced his last week.

Hurd alluded to future plans but provided no specifics in his own announcement Thursday.

"I have made the decision to not seek reelection for the 23rd Congressional District of Texas in order to pursue opportunities outside the halls of Congress to solve problems at the nexus between technology and national security," he wrote.

A source close to his deliberations said the decision was not made impulsively, overnight or in reaction to any specific event. It was unclear as the news broke whether state or national Republicans have a backup plan for a candidate in this district. Several state and national Republican operatives reached out to The Texas Tribune to react to the news. Nearly all of the commentary involved highly explicit language.

It is apparent that his reelection would have been difficult.

Veteran Gina Ortiz Jones nearly defeated Hurd last cycle, and Democrats were emphatic that they would put all of their muscle into helping her capture this district, which has become something of a white whale for the party.

"From San Antonio to Socorro and everywhere in between, Texans are ready for new leadership in Washington and I’m ready to serve," Ortiz Jones said in a statement Thursday.

Nationally, Hurd's retirement is a massive blow to the morale of Republicans who care about winning back the U.S. House.

Since the last redistricting process, several congressional seats have become competitive amid changing demographics and backlash against Trump. But the 23rd District was the only seat in the current congressional map that was actually configured to be competitive.

That distinction came only after it was modified by federal judges who found that the Republican-held Texas Legislature intentionally discriminated against Latino voters when they originally drew up the district in 2011.

The 23rd district had been considered a district where Latino voters could overcome racially polarized voting to elect their preferred candidate. But seeing trouble ahead, Republicans in 2011 worked to manipulate Latinos’ political clout to keep the district in their column, the court found.

State lawmakers eventually adopted modifications ordered by the court. Pointing to Hurd's consecutive wins in recent years, some have argued those changes did not go far enough in restoring the 23rd district as an “opportunity district” for Latinos.

Initially elected in 2014, Hurd defeated former U.S. Rep. Pete Gallego, a Democrat, in such a sneak attack that he was initially perceived as an accidental congressman who came to office amid a Republican wave. But in his three terms in Congress, he was the model of a vulnerable congressman who defied political gravity and eked out victories each election night. He did this by leveraging the advantages of incumbency, raising enormous amounts of money for himself and for the House GOP campaign committee, and crisscrossing the sprawling district that stretches from San Antonio to El Paso.

The chairman of the National Republican Congressional Committee issued a statement Thursday night voicing his party's determination to keep the district. NRCC Chairman Tom Emmer said it leans Republican, and the party "will fight tooth and nail to ensure it remains in Republican hands in 2020."

A spokesman for the Democratic Congressional Campaign Committee unsurprisingly had a different take.

"Democrats will win this seat, and if Will Hurd doesn’t believe he can keep his job in a changing Texas, his colleagues must be having second thoughts, too," said DCCC spokesman Avery Jaffe.

Given his place as the once-lone Texan who faced a tough reelection each cycle, Hurd cut a unique cloth during his time in Congress. With an eye on reelection, he often was the only Texan to cross party lines on high-stakes votes.

In addition to the vote to condemn Trump last month, he voted against a Republican House bill in 2017 to repeal President Barack Obama's 2010 health care law.

He also notably drove to Washington from San Antonio in an impromptu road trip with Democratic former U.S. Rep. Beto O'Rourke. The pair livestreamed the adventure, even stopping to check out Elvis Presley's home, Graceland, in Memphis while extolling the virtues of bipartisanship.

In 18 months, neither will be serving in Congress.

Before his service in the House, Hurd was a fixture in Texas politics, particularly in Texas A&M University circles. He was the student body president on campus when a bonfire collapsed in 1999, fatally injuring several students.

He went on to serve in the CIA and was completing his first year as an agent when the Sept. 11 terrorist attacks occurred.

"I remember the months leading up to 9/11, where folks in the counterterrorism center were not going home. They were sleeping in their cars,” he told the Tribune in 2017. “Folks that had been dealing with this issue were concerned that something major was going to happen.

“There was a nervousness throughout the entire building,” he added.

Republicans and Democrats alike lauded his time at the CIA and in Congress on Thursday. A source close to the Hurd campaign stressed to the Tribune that he is going to continue to be a presence in national politics down the road.

"I'd like to thank Will Hurd for his lifetime of service to our country," said Emmer, the NRCC chairman. "Will is a patriot and I wish him all the best."

Alexa Ura contributed to this story.

Disclosure: Texas A&M University has been a financial supporter of The Texas Tribune, a nonprofit, nonpartisan news organization that is funded in part by donations from members, foundations and corporate sponsors. Financial supporters play no role in the Tribune's journalism. Find a complete list of them here.

This article originally appeared in The Texas Tribune at https://www.texastribune.org/2019/08/01/us-rep-will-hurd-texas-retiring-congress/.