Texas put billions more into schools. Is that enough to help the Edgewood school district break out? 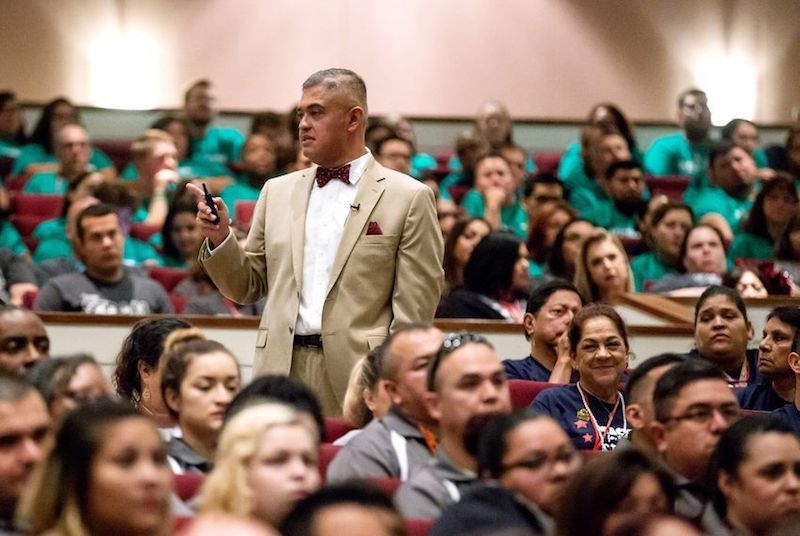 Palmira Aguirre has seen her fair share of principals come and go during her 23-year tenure as a teacher at John F. Kennedy High School — including most of a year when there was no permanent principal at all.

The Edgewood Independent School District physics teacher used to feel ashamed telling people where she worked — a school district managed by a board so mired in personal conflict that they couldn't make crucial hires to lead their high schools or their school system.

"It's like a revolving door," said Aguirre, who heads her high school's parent-teacher association. "There's no stability at the upper level."

In addition to leadership scandals over the past several years, Edgewood ISD has struggled with repeated low state ratings, a school board controlled by the state and an exodus of students to charter schools.

But with the help of an energetic new superintendent, district leaders are working to convince parents and students yet again that they're ushering in a new beginning. As Edgewood starts a new school year Monday, the district has the monetary backing of House Bill 3, a massive school finance law passed in May that aims to help Texas' poorest school districts, like Edgewood, pay teachers more and improve pre-K programs.

The Edgewood community has heard such promises before. The district was the lead plaintiff in a landmark Texas school finance lawsuit in 1984, accusing the state of failing to equitably fund public schools. Whether HB 3 provides the “transformative” change that the state’s top leaders have promised will depend on whether school districts like Edgewood can use it to tangibly improve how they teach students.

And local leaders have a long way to go to convince demoralized parents and teachers who have stuck with them, in some cases for generations, that things will go better this time.

"I have a lot invested in the district," Aguirre said.

"We deserve a second look"

In 2016, the high-poverty school district on San Antonio's west side had reached a low point. The state decided to take over its school board, which was too paralyzed by toxic infighting to hire a permanent superintendent. Teachers were leaving for other schools or careers at worryingly high rates, much higher than the state average.

By the time the state-appointed school board hired Eduardo Hernandez as the new superintendent last year, community members had lost trust in their local public schools. Hernandez, who had previously turned four struggling schools around as a Dallas ISD principal, worked to form relationships with parents in the neighborhood, many of whom had attended district schools as children.

He launched a series of "pláticas," casual chats often hosted in people's homes and at their dinner tables, to show how intently he was listening to their concerns. "Our board meetings are about people now. We're not talking over each other. We're listening. We're trying to work as a team," he said. "We're going through a re-acculturation of the district.”

Among the newest attempts at reformation: partnering with a prominent city program to offer full-day pre-K, hiring a marketing coordinator to help rebrand Edgewood ISD and opening up the boundaries of the district so kids from other neighborhoods can attend its schools. The superintendent and school board have created a list of five goals, including a focus on student success and financial stewardship, that drive each decision they make.

Like many other urban districts, Edgewood ISD is battling the loss of students to charter schools and other school districts in Bexar County, and fewer students means less funding. Facing increasing competition for students, Hernandez has the tough job of severing the district from its reputation of poverty and struggle.

The new school finance law may help, giving Edgewood ISD about $8 million more this year to provide employees with raises, beef up a team of social workers and hire more bilingual staff. There are signs that Hernandez — whose contract has already been extended for two more years — is moving the needle. Though many schools are still low-performing, parents who look up the district's state rating will see a C grade, up from a low D in 2018, meaning Edgewood ISD is no longer the lowest-scoring district in San Antonio.

And for the first time this year, Brentwood, a middle school, has been designated an arts and science "school of innovation"; sixth-grade enrollment is projected to be almost double the previous year's.

"We're not saying we've arrived," Hernandez said. "What we're saying is we deserve a second look."

"Over the past several years, there's been some fractured relationships between Edgewood and the community," she began, before going on to explain the many ways that parents can be engaged with their schools. 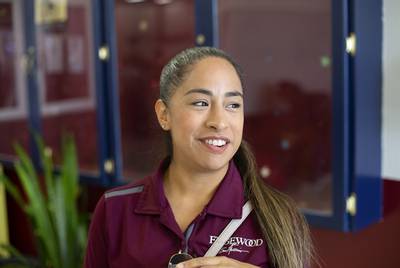 Marisa Perez-Diaz, a district administrator who also serves on the State Board of Education, is trying to get more parents engaged with their schools. Marjorie Kamys Cotera for The Texas Tribune

Sitting in the front row during the presentation, Rudy Lopez, president of the local neighborhood association, acknowledged that the district's progress has been "a little slow." But he's thrilled that the school board is actually functioning and that the superintendent is "thinking outside of the box" in bringing in new programs and partnerships. The school board will transition out of state control and back to being fully elected by next spring.

Like the majority of people in the room, Lopez graduated from Kennedy High School; he left the neighborhood for another part of San Antonio but was pulled back after his mom got sick. "I really do like this community. I'm going to do my damnedest to make sure we're an awesome school district as well," he said.

Lopez graduated the same year the Texas Supreme Court ruled for Edgewood ISD in a major school finance lawsuit against the state.

"Children who live in poor districts and children who live in rich districts must be afforded a substantially equal opportunity to have access to educational funds," Justice Oscar Mauzy wrote in the 1989 opinion striking down the state's school funding system as unconstitutional. But that ruling didn’t lead to a complete fix, nor did six other lawsuits that made it to the state’s Supreme Court over nearly three decades.

The billions lawmakers approved this spring for public education will pour into a school system that’s now majority Hispanic and low income. The law is another state attempt at righting a longstanding failure to educate those students.

Just over three years ago, Kennedy High School had no principal, due to the school board’s dysfunction. Now it has Graciela Martinez, who graduated from Edgewood High School before it was shut down in 1996. She still sees people she went to school with around the neighborhood, including some who she says were smarter than she was but were allowed to fall through the cracks.

"I was fortunate enough for whatever reason to be more of the high flyer, the one that was in all honors courses," she said. "What I reflected on later was that a lot of my peers didn't make it."

Hernandez is trying to shake up the way teachers and principals treat students, with a focus on students' emotional health instead of punitive discipline. Not everyone has embraced the new approach, Martinez said. They’re still accustomed to leaders who don't stay and initiatives that don't stick.

"I think the change is coming. I don't think it's fully here yet," she said.

This article originally appeared in The Texas Tribune at https://www.texastribune.org/2019/08/19/edgewood-isd-texas-school-finance-funding/.