The AAPI organization in San Antonio will be holding an event on Saturday, March 12 in remembrance of the eight people, including six Asian women, killed in the Atlanta spa shootings in March of 2021. This event will be a peace vigil for all the victims of Anti-Asian hate and will be followed by a demonstration session that incorporates Filipino Martial Arts geared for women's self-defense. This will also be an opportunity for allies to process reflection questions and to learn more about the Anti-Asian attacks that are still happening and impacting the Asian community.

Here is a description of the event from their press release:

“The peace vigil will center speakers and stories from Asian women and femme, Asian community service providers and topics about the most vulnerable: women, trans, immigrant workers and the working class, including those in industries usually assigned shame. Allies can show their support by promoting and attending the event, which will include reflection circles for men and allies, alongside the healing circle for Asian women and trans. All will be welcomed to watch the Filipino Martial Arts self-defense demonstration”.

March 12 will be a day of solidarity, healing, and education to honor the 1 year anniversary of the 2021 Atlanta spa shootings. Join the AAPI for Justice in San Antonio in  #RememberingMarch16. 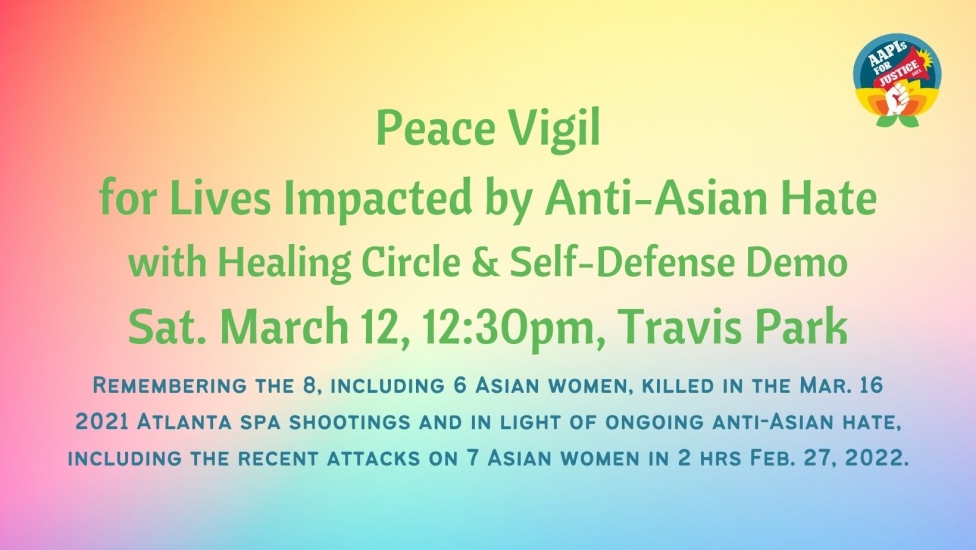