Eight of the 10 candidates for City Council District 10 pitched their views on the issues at a March 20 forum at the Northeast Service Center.

Northeast Neighborhood Alliance hosted the forum, which more than 150 people attended. More candidate forums are being held in every city council district ahead of the May 6 municipal elections. The forum was more of a meet-and-greet with rapid-fire questions and answers provided. Alliance President John Clamp, a former council member,  urged attendees to follow up by individually contacting the candidates for more information.

“Take the effort to contact them. They can’t be everywhere at once,” he added.

Most of the candidates promised to concentrate on upgrading fundamental city services in the district: emergency first response, streets, drainage, sidewalks and lighting.

Jonathan Delmer, president of the Oak Park/Northwood Neighborhood Association, said his priorities lie with road improvements and maintenance, and public safety. Attorney and former teacher Ezra Johnson said he would like to scrutinize the city’s budget process to boost funding for police, fire, EMS, sidewalks and pedestrian safety.

U.S. Army veteran Lon Jett IV pushed public safety with a call for more patrols, improved street lighting, and posting retired police cars in certain areas as a crime deterrent. These were among the dominant themes at the candidate forum. But other issues got some attention.

Eric Morse, a web developer working at USAA, concentrated on the themes of fiscal responsibility, Smart City technology initiatives, new urbanism, and ensuring District 10 gets its fair share of budgeted and bond funds. Therapist John Alvarez said the city is in need of an independent ethics review group to help facilitate more transparency and accountability on the part of the council, commissions and boards.

Another candidate is Diana Kenny, a school psychologist whose company consults with schools to serve students with special needs. She said the city could do more to cooperate with schools, and to better serve individuals who are homeless and the mentally challenged. A few of the candidates said neighborhoods across District 10, including the NNA itself, are active enough that they should be used as resources toward revitalizing the district.

“We have the highest rate of homeownership in the city. We should tap into that,” Alvarez said.

Delmer applauded the strength of neighborhood associations. Johnson spoke of his professional experience in bringing together different parties to produce a consensus. He said that skill set should work at City Hall.

“Let’s get everyone else together and have decision-making based on input from all relevant stakeholders,” Johnson added.

Johnson also supports bolstering the San Antonio Fear Free Environment (SAFFE) program, and creating a “no wrong door” policy by which a homeless person can tap into basic services just by visiting the nearest police, fire or library facility.

Concerned about response times, Perry said he’d like to ensure emergency first responders are not only well-equipped, but that they are not stretched too thin.

“The difference between three minutes and six minutes could mean life or death,” he added.

Kenny cited concern about socioeconomic inequity citywide, and how it particularly affects children and young families.

“Let’s make sure children and all people have access to everything they need,” she added.

King and Delmer backed a swift conclusion to efforts to arrive at a new collective bargaining pact between the city and the firefighters’ union. In terms of beautifying the physical appearance of District 10, Morse said the city should take another look at its zoning laws and code compliance program.

Delmer said the city’s existing code compliance enforcement program has been lacking. He added the city’s bond proposals, also on the May 6 ballot, could “beautify a lot of stuff.”

Jett said there must be a more concerted effort to battle littering and graffiti. Johnson suggested making absentee landlords more accountable for making sure their property is well maintained. King said the Northeast Corridor Improvement Partnership can go a long way toward helping businesses along the Perrin-Beitel/Naco-Perrin sector to rehabilitate their appearance.

The candidates were also asked if they support the city’s multi-proposition bond. All but King and Perry said they would vote for the bond. Perry, who served one on the citizen committees that helped to prepare bond projects, said he is still not totally sure whether it could succeed at the polls.

“I’m still get input on it from all of you,” he added.

King said voiced worry about costs associated with some of the proposed bond projects, especially in the parks and recreation category.

“I believe it is a waste,” she added.

The candidates were then asked about Senate Bill 2, which the Texas State Senate recently approved as a means to apply relief for property taxpayers. Officials of municipalities and counties oppose the bill, saying the new bill - if signed by the governor - could lead to local revenue caps, resulting in less funds for basic services. Only Perry, Morse and Kenny expressed support for the legislation.

In response to another question, all candidates except for King said they would support Major League Soccer expansion in San Antonio. Such a thing could affect Toyota Field in District 10, where the city’s current professional San Antonio FC team plays.

Current Councilman Mike Gallagher, who is not seeking re-election, said he likes this field of candidates vying for his council seat. He also likes that they collectively reflect the priorities of District 10 voters.

“One thing that wasn’t discussed much of tonight was growth. We have to be prepared,” Gallagher said. “Whether we like it or not, we’re going to have quite a few more people in San Antonio.”

Clamp encouraged the candidates all to talk about their professional and educational experiences to distinguish themselves on the campaign trail.

“I think we’ll have a good run for our money,” he said. “The ones who work hard and block walk to get their message out, will do well.”

Two other candidates did not take part in the forum: retired Army cook Andrew Padilla, and Celeste Montez-Tidwell, a health care attendant. 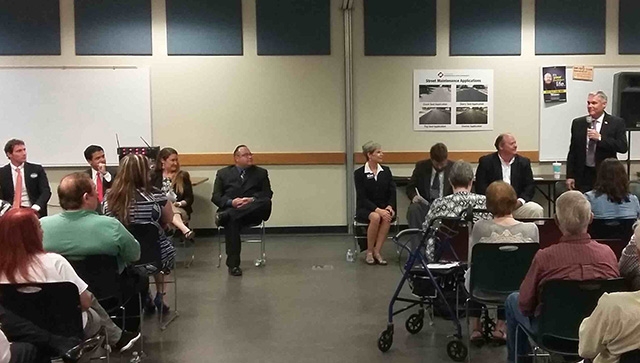