There will be more than San Antonian taquerias, musicians and filmmakers demonstrating their talent at this year’s South by Southwest (SXSW) festival.

Several local representatives from the high technology, culinary arts and educational sectors will gather in Austin to discuss how San Antonio has now become known more than a tourist town. The annual convergence of interactive technology, music and cinema begins March 10.

Hundreds of panel discussions, presentations, workshops and meetups are planned for the thousands of expected attendees and participants from around the world. Topics range from transportation and nonprofit management to public health and immigration. For a second straight year, the nonprofit Choose San Antonio will help to lead a coordinated effort to showcase San Antonio in fields, such as cybersecurity and community development.

The city of San Antonio is among the private and public partners in this effort. Choose San Antonio is bringing back its hashtag #SATXatSXSW campaign. Some city leaders joined Choose San Antonio representatives and planned festival participants in a kickoff rally March 1 at Burleson Yard Beer Garden, on the city’s near East Side.

“We’ll all have an opportunity to learn about the amazing things that are happening in San Antonio,” Mayor Ivy Taylor said at the rally. “I know many of you out here are part of making San Antonio such an exciting place and are eager to share your stories.”

View a small photo gallery below. 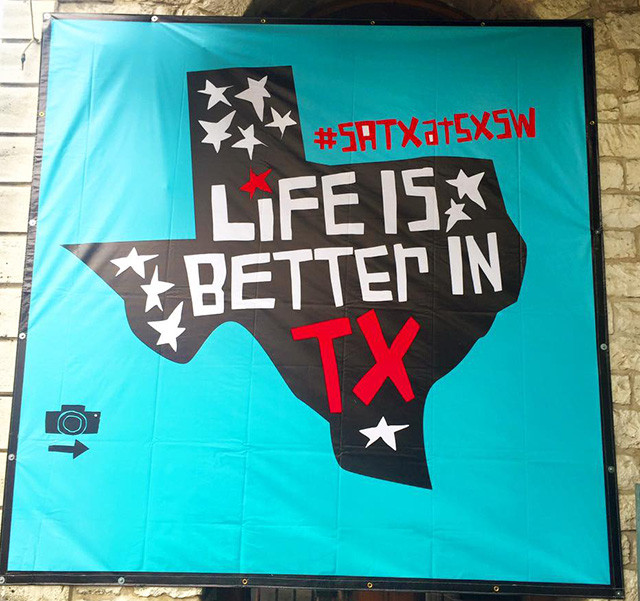 Homegrown cultural arts will be featured during evenings of the first weekend at Casa San Antonio. On March 10, San Antonio Sound Garden, the city’s first music-focused incubator, will presents several local musicians. On March 11, a “Life is Better in Texas” party will feature samples created by participants in Launch SA’s Break Fast and Launch culinary accelerator program. March 12 will be a showcase of local filmmaking talent.

Additionally, a Friday morning featuring a taste of local taquerias will kick everything off at Casa San Antonio. Some San Antonio food trucks, also, will spend that weekend stationed near Half Step. Even noted local social media celebrity Spurs Jesus will be appearing.

Throughout the weekend, visitors to Casa San Antonio will see, on infinite loop, a display of social media uploads with the #iChooseSA hashtag. San Antonio natives, transplants and returning community members are encouraged to share their Alamo City pride on Instagram, Twitter, Facebook and Snapchat using the hashtag.

Noah Alamanza of Choose San Antonio partner, Centro San Antonio, spoke at the rally about how his organization advocates “mobilizing resources and people to build a more prosperous downtown.”

“We want to make sure people are choosing S.A. not only for vacations,” he added. Alamanza also, used the platform to urge support for the city’s proposed $850 million bond, which is on the May 6 ballot.

While an official SXSW badge is required for many festival activities and venues, no badge is needed to enter Half Step during the weekend. Choose San Antonio is also returning with its icehouse-themed trade show space at the convention center, from March 12-16. There, several locals will act as ambassadors of sorts for the city. An SXSW badge is needed to enter the trade show hall.

But that’s not all. Other San Antonians will be taking part in official and unofficial SXSW events. Melanie Mendez-Gonzales, creator of the blog “Que Means What,” is returning to SXSW. She’ll join an official session, “Pathway to Increase Diversity in the Outdoors.” Mendez-Gonzales and other panelists will address how the outdoors and heritage sites can connect fast-growing populations, such as Hispanics, encourage better health through exercise, and bridge diversity gaps.

But this year’s South by conference is not without its controversy. Some participants have criticized festival organizers because of SXSW’s pledge to contact immigration officials if artists are found to be performing in violation of their SXSW artist contract. Specifically, participants fear that any unofficial SXSW performances conducted by immigrants and artists from abroad would be met with deportation and a revocation of visas.

State Rep. Diego Bernal (D-San Antonio) was to be on a panel discussion about LGBTQ community rights and protections. But on March 6, Bernal pulled out of the event. In a press release, he said he could not in “good conscience” take part “in a festival that uses the threat of deportation as part of its business practices.”

According to Bernal, conference leaders said they will revisit and amend the policy in the future.

Dozens more San Antonio-based musicians are lined up for performances at different venues scheduled through the remainder of SXSW, which ends March 19. Trinity University radio station KRTU is curating an unofficial SXSW musical showcase of local talent. The concert will take place at Cheers Rooftop Bar. KRTU opened up applications to San Antonio musicians one month ago.

“In less than two weeks, we had about 100 bands from San Antonio apply to be on that showcase,” said events/promotions director Ben Gomez. “That’s pretty amazing about our local music scene.”

Choose San Antonio Executive Director Meghan Garza-Oswald told NOWCastSA prior to the March 1 rally that her organization learned a lot from last year’s SXSW excursion and tweaked things a bit for this year’s trip.

“Our goal is to promote a unified community brand,” she said. “We want to provide the taste, vibe and feel of San Antonio. That’s our mission, that’s our job.” 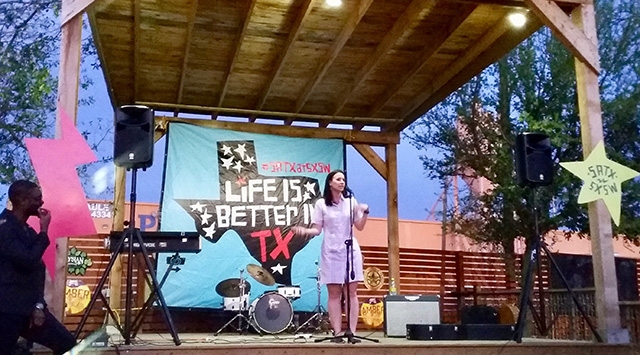