Britt Tovar, a queer Chicana of Austin, Texas shared her experience of coming out as a high school student. She chose to share her story because of the experience that many teens have once they enter into the school system.

“The high school I attended in Southwest Austin did not have a GSA (Gay-Straight Alliance) when I came out my freshman year,” Tovar said. “My best friend at the time told me she wanted to create a GSA and that she wanted my help.”

Creating a GSA at James Bowie High School was not an easy mission. Tovar and her best friend encountered pushback from conservative administrators who did not approve of their efforts to create a safe community for LGBTQ teens and denied their request for a GSA. Amongst the sea of dissent, they found two supportive staff members to serve as their GSA sponsors: One was the only out lesbian on the faculty and the other was a highly revered government teacher. This brave team collected petition signatures and conducted secret gatherings in the orchestra room. Thanks to their tenacious endeavors and communal support, the administration approved an official GSA at Bowie High School during Tovar's junior year.

Tovar’s powerful story brings up an important issue. Many LGBTQIA+ teens have difficulty finding support and it often leads to tragedy. The Center for Disease Control and Prevention reported that the suicide rate is four times higher for lesbian, gay, and bisexual youth and two times greater for youth who are questioning their sexuality compared to heterosexual youth.

Perhaps even more alarming is the estimate that 41 percent of transgender and gender-nonconforming people have attempted suicide at some point in their lives. With little support, LGBTQIA+ teens are left to defend themselves and their rights. This is apparent in local grassroots movements.

Years after her triumphant experience, Tovar accepted the role of Program Director at SanghaLink, a nonprofit organization based out of Austin that creates a safe, invitation-only, virtual network for LGBTQIA+ teens to meet and confide in each other.

The word “Sangha” means “community” in Sanskrit. The founder of SanghaLink, Anna Weingart, expresses how she felt coming out as lesbian as a high school teen: “When I came out in high school, I was accepted (to an extent), kind of, ummm, tolerated, is what I was. Tolerated, but there was always this tension.”

Fear is the root of the tension that Weingart says most teens experience today. This tension may occur because society is afraid to live outside the status quo. SanghaLink was created out of necessity, Weingart explains, as she shares that SanghaLink is a space for  LGBTQIA+ teens to connect and to be reminded that they are not “bad” or “different.”

A self-identified visionary, Weingart is responsible for visiting high schools and other LGBTQIA+ organizations to ask LGBTQ teens what they need to feel supported and embraced. She then brings their hopes into existence, somewhat like a fairy godmother, for LGBTQIA+ youth who need community. She explains how she built the crucial network that became SanghaLink.

As a sophomore in college, the young Weingart never imagined that she would take a break from academia to bring an important goal into action. She tells NOWCastSA that it was a bold move that she can’t explain the logic behind, but it was very necessary. Her parents were shocked that she would be leaving school and did not support her choice, but Weingart knew this wasn’t a choice. She turned to her community for support and met with people that were experienced in nonprofit management. She knew that she wanted to help LGBTQIA+ teens feel less alone and she would do this using the internet.

“I just went to events and I would ask if I could speak at the event and really share our story with ever person that I possibly could,” Weingart says. The word-of-mouth method was a great aid to SanghaLink as people began coming to her because they heard of what she was building, making it possible for a communal network to be born from community outreach.

There are challenges to establishing a virtual network for LGBTQIA+ teens; one of the most prominent being safety. Distance can become an issue when users don’t know who they are connecting with via other social network sites and they can become targets for predators. SanghaLink prevents this threat by establishing relationships through the high school system and making this platform accessible only through invitation. Once SanghaLink users graduate from high school, they are required to leave the network, in accord with ensuring that the site is only used by high school students.

Currently, SanghaLink is working at reaching more LGBTQIA+ teens, as outreach has been a challenge for them. They are moving past this obstacle by making a video that will showcase their new app, a development they fundraised for on Amplify Austin Day, a day created to provide donors with an online space in which they give back to the city’s organizations. Weingart attributes the evolution of SanghaLink’s app to LGBTQIA+ teens due to the fact that the organization conducted focus groups with teens in Austin, Texas and Washington, D.C. in order to find ways to serve them. The teens came up with this idea and the video they are currently working on will help raise more funds for the highly accessible app.

Here's a link to a video made for SanghaLink and Amplify Austin Day:

Weingart shares why people should support SanghaLink, “Right now they (LGBTQIA+ teens) are being attacked by politicians. An entire political party is demonizing them and I want you to think, or anyone who is watching to think, you know, about your most traumatic experience in high school. We all have our difficult memories that we look back on and we think, ‘What we were doing?’, but can you imagine being in high school already in a vulnerable state and the entire country is targeting you?”

SanghaLink is a space that saves lives and empowers LGBTQIA+ youth to advocate for their communities. Tovar also gives a reminder that the urgency for spaces like SanghaLink cannot be ignored. One of the members, a high school student named Austin, shared his story.

“Before SanghaLink, I had no idea that they were this many people like me in Austin,” he said.

A basic need for LGBTQIA+ youth is to find other teens who understand them.Tovar had an affirming experience shortly after she began working at SanghaLink. She facilitated a presentation for the GSA at the high school where she graduated from and the sponsor who mentored her in her senior year of high school was still the GSA sponsor when she returned.

“It was beautiful, getting to see my journey come full circle,” Tovar said. 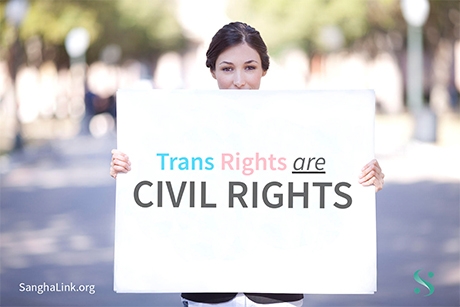