Nearly 200 neighborhood residents attended the 3rd annual Neighborhood Day hosted by the Bowen Center for Neighborhood Advocacy on June 9 at Laurel Heights United Methodist Church. The event encourages residents to come together to get information and discuss ideas to make better neighborhoods.

Ana Sandoval, District 7 councilwoman, gave the keynote speech “Neighborhoods: The Building Blocks of San Antonio's Future.”  She was followed by Michael “Mike” Amezquita, chief appraiser for the Bexar Appraisal District and Tommy Calvert, County Commissioner Precinct 4, both of whom focused on the rising property tax bills.

There were nine round table discussions ranging from issues on graffiti to animal care services that were held in other rooms throughout the day. Follow this link to the event program: https://drive.google.com/file/d/1JJdxtP0TkYcKqMvGQq2GSlO7X6lUl75r/view?usp=sharing

Watch video from all four sessions here, or scroll down for quotes from speakers and direct links to their remarks on the video.

Sandoval began by talking about changes, growth and restoration she noticed since returning back to San Antonio before her election in 2017 and then compared them to the neighborhood she grew up in, Woodlawn Lake.

“I saw through the eyes of not what was, but what could be. I saw a city that was also growing more prosperous,” she said referring to The Pearl and La Cantera. (Watch video of her remarks here https://youtu.be/OPqyPLq5kCo?t=3m38s.)

During her speech, she suggested involving neighborhoods to achieve equity and growth and referred to SA Tomorrow, the city’s master planning process: https://satomorrow.com/.

Sandoval spoke about the city’s new ordinance, which will go into effect on October 1,  to raise minimum age to buy cigarettes from age 18 to 21: https://www.sanantonio.gov/Health/HealthyLiving/Smoking#96672813-about-tobacco-21

Sandoval and Amezquita talked about the shortage of affordable housing. Sandoval, who once lived in San Francisco, said that city was unaffordable to those making less than $200,000 a year. She noted citizens in San Francisco invested in homes in Texas.

Amezquita said that despite his salary, he couldn’t afford to buy his childhood home in Austin, which, according to him, is now valued at $1,250,000. (watch here)

Amezquita focused on issues dealing with the state funding for school districts through property tax.

“I’m not anti-school system. I'm anti the state not paying its fair share and spending taxpayer money on something other than schools," he said. (Watch his remarks here)

“As property tax rate grows, tax rates stay the same...the school is locked into the funding formula of the state. The state forces me to make sure that your house is valued high enough, within that 95%-105% rate, but they don’t look at commercial value around the state,” Amezquita said. (watch here)

“The whole discussion this morning because you are here on a Saturday morning, is
I’m hoping one of you, maybe 10 of you, will have the nerve to get to Austin and talk to the Legislature,” he said.

Amezquita said  he would give anyone information to anyone who asked for it.

“A well armed, educated public is the best friend I have. That’s why I’m here this morning,” he said. Contact Amezquita by phone at 210-242-2411 or by email esca@bcad.org.

Ryerson talked about the  SA Tomorrow Comprehensive Plan and acknowledged the importance of neighborhoods.

Ryerson acknowledged that some neighborhoods are not listed or mentioned in the Comprehensive Plan, but he promised the city would help those communities create a Neighborhood Plan. (watch here)

He urged residents to be involved during the planning stages. “We need to hear from you, what your neighborhood is thinking, but we also really need for you to take back to your neighborhood the information you are hearing at planning team meetings.”

Spielman stressed the the importance of neighborhood involvement as well as the need to include residents who are not yet part of formal neighborhood associations. (watch her remarks)

Audience members confronted Ryerson about the lack of neighborhood representation in SA Tomorrow, during the question and answer portion of the discussion. (watch the exchange)

Tommy Calvert, County Commissioner for Precinct 4, weighed in with more discussion on taxes.

Calvert noted the increase the tax was not the fault of school districts, but rather those in office in Austin: (watch his remarks)

He also repeated Amezquita’s earlier assertion that taxes are being higher and the state of Texas is paying less and less.

“Today the Texas Legislature is only funding 38% of the school’s budget through the general fund of appropriations and they are increasing your appraisals and making you pay for the rest,” Calvert said.

Calvert said schools that are fully funded are beneficial for both students and residents by having a better educated state and providing tax relief. He spoke about the effects of rising property tax on his precinct.

“People in my precinct, this is the epicenter of where high property taxes are happening and people are having to face a choice of whether they can stay,” he said. “I don’t think that’s right. People endure through crime, people endure through blight and then they got to move out so that ain’t right.” 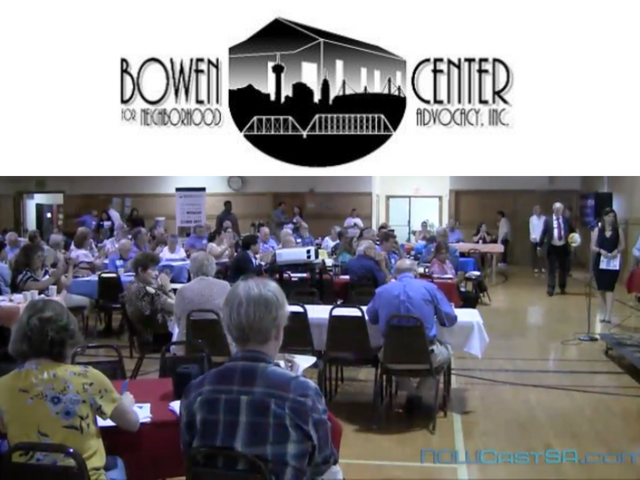