A year after the city unilaterally allowed an arts group to install sculptures in Mahncke Park, the community is getting its first opportunity to comment on the plan that was developed and dramatically expanded without public input.

After a meeting with area residents on June 18 grew contentious over the lack of information about the art (watch full video of the meeting here), the Mahncke Park Neighborhood Association board said it  “requested a halt to further installations pending a public input process.” A public meeting is scheduled for Saturday, Oct. 12 at 10 a.m. in Mahncke Park.

The Tres Centurias Foundation, a nonprofit, originally wanted to place a temporary art installation in Mahncke Park as part of San Antonio’s 2018 Tricentennial Celebration, according to an Oct. 2 informational email to residents from the Mahncke Park Neighborhood Association.

Without holding any public hearings, the City of San Antonio Parks and Recreation Department signed a “Right of Entry Agreement” agreement on Dec. 12, 2018, permitting Tres Centurias Foundation to install four sculptures in the park that was named after Ludwig Mahncke, San Antonio’s first parks commissioner. Tres Centurias is funding all costs of the project.

“We can’t have everybody in Mahncke park flow into one building and have a discussion and make a decision. That is what a (neighborhood association) board is for.” (watch his comments here)

Lazarine, an architect, is a former president of the Mahncke Park Neighborhood Association and a member of the neighborhood’s Land Use Committee.

Mahncke Park Neighborhood Association Board members and members of the neighborhood Land Use Committee were briefed by Tres Centurias on the proposal in a joint meeting in August, 2018,  and no one had any objections to the proposal.

But the board and committee members said they understood that their input and approval was not needed for the project to proceed.

“We had a joint meeting and we got a thumbs up to go ahead," said Lazarine. "So I believe there was community participation throughout the process. Although it was not needed to satisfy the Parks Department, that was something we did to get more input.” (watch video of his comments here)

In September, 2018, the neighborhood newsletter mentioned the coming artwork, but most residents became aware of the project in February, 2019, when four sculptures were installed at the North New Braunfels end of the park that stretches down hill, three quarters of a mile to Broadway, across from the entrance to Brackenridge Park.

In April, the neighborhood newsletter noted the arrival: “Observant neighbors have noticed the large, metal, multi-piece sculpture in Mahncke Park near the bus stop on N. New Braunfels. Installed last month, the artwork is on loan from the Tres Centurias organization, which has an agreement with the Parks Dept for placement of the artwork in the park for two years with option to extend the term by one year. Tres Centurias is responsible for all maintenance related to the sculpture, which is reported to be resistant to urine & graffiti.”

In May, Tres Centurias informed the Mahncke Park Neighborhood Association board it would be installing another sculpture in the park, this one by James Surls, who agreed to loan his piece, "Walking White Flower," for three years.

Without obtaining additional permission from the city, workers began digging up and clearing a site in the protected wildflower zone of Mahncke Park for the Surls sculpture on the day of the neighborhood meeting.

“My apologies, my mistake, I thought things were further along,” artist Ethel Shipton explained at the neighborhood association meeting that evening. “We stopped it.”

Speaking for the Tres Centurias Foundation, Shipton said the nonprofit envisions creating an outdoor sculpture park within Mahncke Park. She said they were inspired by Chicago’s Millennium Park, and showed a presentation with images of art in natural areas around the world. (watch video of her presentation here)

Ric Minks, whose home faces the park, repeatedly asked Lazarine and Shipton to define the scope of the project, but got no response.

“How far are we going with this in Mahncke Park?... “How many pieces of art are you expecting to put in this park?” Minks asked. (see the video of his comments)

“To your point sir, about how many pieces we will have or would like to have. So we had a meeting last week to discuss that issue specifically,” Lazarine said. “So the next step for us will be to have a Master Plan exercise between Tres Centurias and Mahncke Park, so we can start mapping. As we do acquire more art, where would it go? How many pieces can Mahncke Park hold?” (watch video his comment here)

Residents seemed surprised that the decision to create a sculpture park had already been made without public input.

The Mahncke Park Neighborhood Plan, first adopted in 1983 and last updated in 2008, includes a Conceptual Plan for Mahncke Park. The plan, which reflects input from more than 100 people over 25 years, called for features including a stone bench for viewing the vista, 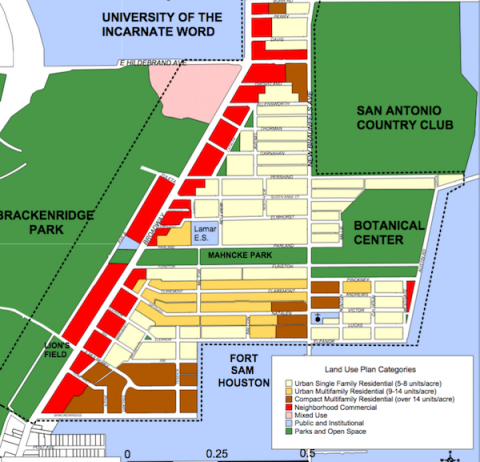 dedicated wildflower areas, walking paths with handicapped ramp access, a small footbridge, a sports playing field, restoring the historic Acequia Madre route through the park, and a more formal connection with Brackenridge Park. The people’s plan for the park does not include public art.

“Now if everybody agrees to make Mahncke Park a sculpture park, that’s fine,” Minks said at the meeting. “For me, personally, … nature is my art. I don’t need this. Mahncke Park was designated a natural area park and you are changing it.”

“I also love the wildflowers and to me they are far more beautiful than any man-made sculpture,” said another resident. “Who actually decides on this? Who has the power of making this decision?”

The decision is already made, said Lazarine. “Ultimately, the Parks Department has final say. They greenlighted this project months ago.” (watch video of their exchange here)

He added: “That’s why we want you guys to be part of the Master Plan, so you can give us feedback so we don’t go plunk it down where you don’t want it.”

In its Oct. 2 email to residents, the Mahncke Park Neighborhood Association board wrote that Tres Centurias subsequently identified eight areas in the park that could be used for sculpture installations.

The email said that in August, Tres Centurias gave the board a three-page narrative plan showing how the areas could be used for sculptures “and is a ‘vision for the future.’ “ The email pointedly noted: “The MPNA Board was not involved in drafting this plan.”

The email said that after the June meeting, the board voted to “gather public input, develop official positions on park projects and remain involved in further installation requests and activities.”

Before an addendum can be approved for the additional sculptures, the board email said, Tres Centurias will meet with the Mahncke Park Neighborhood Association Board, present its plan to the city’s Public Art Committee, then to the San Antonio Arts Commission, get a formal “position letter” from the neighborhood association board, and make final presentation to the Parks and Recreation Department for a vote.

Editor's note: This article has been updated to add additional information clarifying the meeting between Tres Centurias and the neighborhood association Board and Land Use Committee.

Disclosure: The author of this article has been a homeowner in Mahncke Park since 1995.