Outside money floods Cuellar primary, with U.S. Chamber of Commerce latest to join the fray

U.S. Rep. Henry Cuellar's primary is attracting a gusher of outside money as the Laredo Democrat works to fend off challenger Jessica Cisneros.

The latest entrant is the U.S. Chamber of Commerce, which started a six-figure TV ad buy Tuesday in support of Cuellar. It is a somewhat unusual move by the powerful Republican-leaning business group, which has previously supported centrist Democrats but has not spent seriously on behalf of one since 2014. 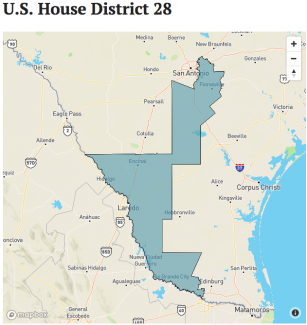 Now the U.S. Chamber is teaming up with the Laredo Chamber and Texas Association of Business to defend Cuellar against Cisneros, a Laredo attorney backed by Justice Democrats, the insurgent progressive group known for helping elect freshman U.S. Rep. Alexandria Ocasio-Cortez, D-N.Y.

"This is a first for us, and we're putting our money where our mouth is," said Scott Reed, the U.S. Chamber's senior political strategist. "It's game on, Justice Democrats."

With just under a month until the primary, the race has now seen over $2 million in outside spending, according to Federal Election Commission records and data reviewed by the Texas Tribune. That is more than any other U.S. House primary this cycle in Texas, and a significant chunk of it includes "dark money" whose sources cannot be traced.

The U.S. Chamber, which is a politically active nonprofit that does not have to disclose its donors, told the Federal Election Commission on Monday that it was spending $200,000 on TV ads mentioning Cuellar. The group is airing a Spanish-language 30-second spot that praises Cuellar's "leadership in passing USMCA" — the new U.S.-Mexico-Canada trade agreement — and for "fighting to protect America’s auto industry from tariffs," noting how car plants across the state depend on the Laredo port of entry.

Reed said the ad will air on broadcast, cable and over-the-top platforms. The Chamber is focused on pro-Cuellar messaging for now, Reed said.

That the Chamber is going to bat for Cuellar is not entirely surprising. He was easily the top-ranked Democrat on the group's latest scorecard, getting a 91% grade for the year and 85% cumulatively.

Cuellar is one of the most moderate House Democrats, and Cisneros is arguing he is out of step with the solidly blue 28th District. She has received endorsements from an array of national progressive groups as well as presidential candidates Bernie Sanders and Elizabeth Warren.

The Chamber joins two other outside group that have already spent big in the primary. First was American Workers for Progress, a shadowy group that has spent over $700,000 on TV ads touting Cuellar's record on health care. The group, which has a sparse website, appears to be a nonprofit that, like the U.S. Chamber, can keep its contributors secret, though it remains unclear how exactly it is set up. Its president, veteran Democratic operative Gilberto Ocañas, has declined requests for comment.

EMILY's List, which endorsed Cisneros in October, is also playing big in the primary through a new affiliated super PAC called Texas Forward. The group has already spent $1.2 million on advertising supporting Cisneros and opposing Cuellar, according to FEC filings. One Texas Forward ad that has surfaced contrasts Cuellar with Cisneros, arguing that there can be a "damn big difference" between Democrats.

Cuellar's campaign has assailed Texas Forward's spending as "dark money," though the group has to disclose its donors and faces a Feb. 20 deadline to do so.

"Emily's List is using a third party moniker because they know their radical pro-abortion agenda is out of step with the values of South Texas voters," Cuellar spokesman Colin Strother said in a statement.

Cisneros said in a statement that she only wants "to be accountable to the people of our district when I get to Washington." She also noted she has not taken any campaign contributions from corporate PACs and lobbyists, a contrast with Cuellar.

Miguel Conchas, president and CEO of the Laredo Chamber of Commerce, said reelecting Cuellar is "extremely important to us."

"I think here locally in Laredo, Texas, I know certainly this young lady Cisneros — I think she may be making an impact, but I don't think it's really too strong of an impact," Conchas said, acknowledging there is more to the South Texas district than Laredo. "I think [Cuellar] understands the district extremely well. That, for us, counts very, very much."

This article originally appeared in The Texas Tribune at https://www.texastribune.org/2020/02/04/cuellar-cisneros-outside-money-chamber/.