Kris Serold was an intern while attending The Art Institute of San Antonio, where he graduated in 2015 with a Bachelor of Fine Arts degree in Digital Film and Video Production. He is a writer, director and creative producer and teaches Film and Video Editing at San Antonio College.

His video work at NOWCastSA included Fourth of July Fireworks on the Hays Street Bridge and A Coahuiltecan Song, a social song to commemorate the he Tap Pilam Coahuiltecan Nation, a group made up of the modern day descendants of protohistoric Indians living in South Texas.

Kris was born in San Antonio and graduated from Brackenridge High School, where he studied Radio, Television and Film. In high school he also attended Say Si. He is a 3 Day Film Festival alum, has created short films and was a video producer at the Aztec Theatre.

His LInkedIn page is here. 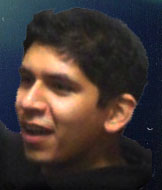