"I'm marching because I've been witnessing the injustices of people of color all of my life, and I think it's important that people look through the lens of a minority, particularly a black man, who are living in fear of their lives," Hood explained to Texas Public Radio's Joey Palacios, who spotted Hood  and interviewed him during a Facebook Live broadcast June 3, 2020. 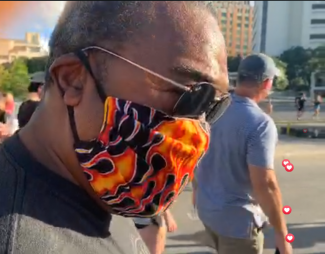 "I have my kids out here. (The video of George Floyd's death) was one of the most horrific things that any of us have ever seen, and it was captured on TV, so you know it happens a lot. So it is important that my kids experience this and are able to pass this on.

"But I do believe this may be the one, George Floyd may be the one, that causes change. If you look at the diversity of the folks you've seen, throughout every city the nation, people very disappointed in what's been happening. So we're hoping to make some change. So it's very important for me to be here today.

"We've been protesting as people throughout our history, and that is the only way we have been able to make positive change.

"It is unfortunate that you get a few people that want to wreak havoc and cause destruction. And it does take away from what we're here for.

"And so I'm expecting people to protest tonight, and I am asking for everybody watching: protest, but protest safely. Protest to a point to keep my first responders safe tonight, because we're there for everybody. We just want people to go out and enjoy this moment of celebration and change, and do it safely."

(Chief Hood's remarks begin at the 5:38 mark in this video)