All Texas Democrats in U.S. House voted to impeach Donald Trump. No Texas Republicans joined them.

By Abby Livingston and Carla Astudillo, The Texas Tribune Jan. 13, 2021

The U.S House impeached President Donald Trump for the second time on Jan. 13, 2020, a week to the hour after supporters of Trump mobbed the U.S. Capitol and caused many members of Congress, their families and journalists to flee for their lives.

The vote was 232-197, and was party-line among the Texas delegation. All 13 of the state's Democrats voted in favor, while 22 Republicans were opposed. Several Republicans, however, said they were outraged by last week's events. One Texas Republican, U.S. Rep. Kay Granger of Fort Worth, did not vote.

The case will now go to the Senate, which must decide whether to convict the president.

How the Texas delegation voted on impeaching President Donald Trump

On Jan. 13, 2020, the House of Representatives impeached President Donald Trump for the second time during his presidency. The vote came a week after Trump-supporting rioters breached the U.S. Capitol. The last time the House voted to impeach Trump was on December 2019 on charges of abuse of power and obstruction of Congress.

The Texas delegation’s votes fell along party lines. Out of the 36 total Texas representatives, 22 Republicans voted no on impeachment while all 13 Democrats voted yes. Republican Rep. Kay Granger did not vote. 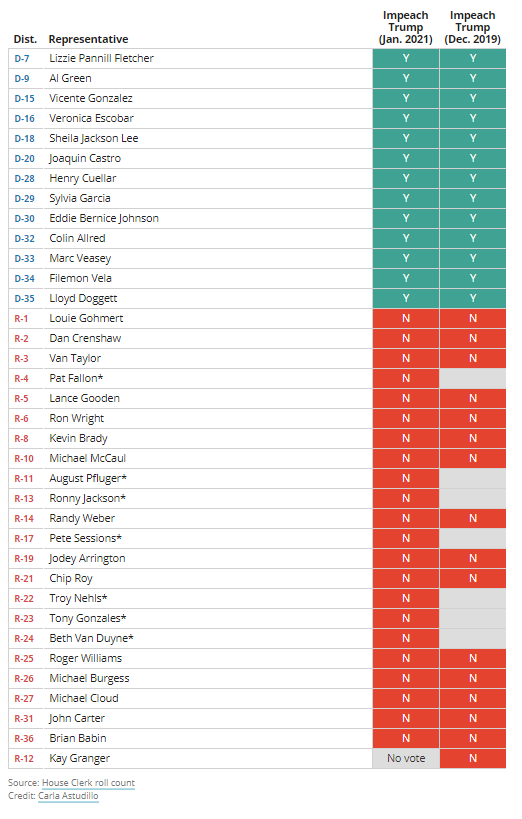 A mere five pages long, the House resolution included one article of impeachment: Incitement of insurrection. In detailing the allegations, the resolution stated that Trump "gravely endangered the security of the United States and its institutions of government."

"He threatened the integrity of the democratic system, interfered with the peaceful transition of power and imperiled a coequal branch of government," the resolution continued. "He thereby betrayed his trust as president, to the manifest injury of the people of the United States."

"Donald John Trump, by such conduct, has demonstrated that he will remain a threat to national security, democracy and the Constitution if allowed to remain in office, and has acted in a manner grossly incompatible with self-governance and the rule of law," the legislation stated. "Donald John Trump thus warrants impeachment and trial, removal from office and disqualification to hold and enjoy any office of honor, trust or profit under the United States."

Ten Republicans from outside of Texas voted in favor of impeachment.

Texan after Texan took to the floor to deliver brief remarks for or against impeaching Trump a mere days before he will leave office. For the most part, Texas Republicans dismissed the Democrats' charges.

"This week's attack on the U.S. Capitol was completely unacceptable and the people involved should be met with swift accountability," said U.S. Rep. Jodey Arrington, a Lubbock Republican. "The president didn't incite a riot, the president didn't lead an insurrection and there are no high crimes and misdemeanors requisite of an impeachment. I'm not saying the president didn't exercise poor judgment. But to criminalize political speech by blaming lawless acts on the president's rhetoric is wrong... and a very dangerous precedent."

"We have the opportunity come together and do what's right for our country," he later added. "The votes are certified. President Trump has conceded. Let's focus on the future and get back to the people's business."

At least three Texans — U.S. Reps. Dan Crenshaw of Houston and Michael McCaul and Chip Roy of Austin — released statements during the vote that harshly criticized the president's actions. But they said they would vote against impeachment because of the language in the articles of impeachment and the speed at which the House was moving.

Roy said Trump pressured Vice President Mike Pence to violate his oath and not accept the election results. That, he said, was clearly "impeachable."

"His open and public pressure, courageously rejected by the vice president, purposefully seeded the false belief among the president's supporters, including those assembled on Jan. 6, that there was legal path for the president," Roy said. "It was foreseeable and reckless to sow such a false belief that could lead to violence and rioting by loyal supporters whipped them into a frenzy."

But Roy said he couldn't vote for the article of impeachment drafted by the Democrats.

"Unfortunately, my Democratic colleagues drafted articles that I believe are flawed and unsupportable, focusing on the legal terms of incitement and insurrection," he added. "Even noting impeachment does not require meeting a certain legal standard, that danger for open speech and debate in this body and for the republic is high. If the House approves the articles as written, the language will be used to target members of this body under Section Three of the 14th Amendment, and it will be used to succeed any statements we make are subject to review by our colleagues and send us down the perilous path of cleansing political speech in the public square."

McCaul, meanwhile, said he strongly condemned Trump's behavior, but worried the House was moving too fast.

"I did not come to this decision lightly," he said of his vote against impeachment. "And I truly fear that there may be more facts that come to light in the future that will put me on the wrong side of this debate."

Texas Democrats took to the floor as well. One of the angriest speech deliveries came from U.S. Rep. Lizzie Pannill Fletcher, a Houston Democrat who was in the chamber during the attack.

"By doing so he incited an insurrection against our representative democracy itself," she added. "If that is not an impeachable offense, then what is?"

Fletcher spent that afternoon hiding and sheltering in place in the House gallery as rioters tried to breach the House chamber doors. Four people engaged in the insurrection died and a police officer passed away a day later as a result of his injuries from the attack.

In a House floor speech earlier in the day, U.S. House Majority Leader Steny Hoyer praised U.S. Rep. Al Green, a Houston Democrat, for the Texan's repeated attempts to impeach Trump in the early years of the Trump era.

The last time the U.S. House impeached Trump was 13 months ago, when the chamber accused him of pressuring Ukrainian officials to interfere with the 2020 election and for obstructing Congress’ efforts to investigate the matter.

This article originally appeared in The Texas Tribune at https://www.texastribune.org/2021/01/13/texas-congress-trrump-impeachment/.