Update: Feta, the rescued baby goat is a boy 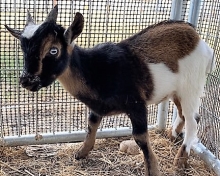 Update: The baby goat in San Antonio Animal Care Services custody turns out to be a boy, with all the trimmings. The kid, which was  found running in a shopping center that houses a meat market and taqueria, was originally identified as a girl.

ACS Spokeswoman Lisa Norwood said many people have volunteered to adopt the little guy. Before the goat adoption paperwork can be processed, San Antonio residents must first get a livestock permit, just as they would for a horse, cow, llama or sheep. (Helpful link here.) 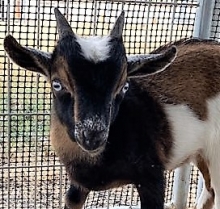 The young goat, or kid, is believed to be a little over two months old. He was found Sept. 24 in the strip mall off Bandera and Hillcrest that houses a number of businesses including the restaurant, meat market, a dentist’s office and cell phone provider.

Witnesses say the goat was lying down on the corner of the property and didn’t appear to be injured. but there’s no word on what she was doing at the shopping center to begin with.

The black and brown goat, which has piercing blue eyes, will be kept at ACS, in hopes an owner claims her.  Staff has named him Feta. It is illegal, unsafe and unneighborly for owners to allow their livestock or other animals to roam off their property.