With counting holdups and missed ballots marring what amounted to a low-turnout election, Harris County election officials are facing pressure from local leaders of both political parties to explain what went wrong in last week’s primary.

Over the weekend, Harris County election officials announced that thousands of mail-in ballots — 6,000 Democratic and 4,000 Republican — had been mistakenly left off the county’s vote tally. This came after unofficial results were significantly delayed in part because more than a thousand ballot sheets were damaged as voters tried out the county’s new voting machines.

Harris County Democrats are calling for a comprehensive post-election review, while Republicans — regular adversaries of the county’s Democratic leadership — are simultaneously suing the county and demanding the resignation of its election administrator, Isabel Longoria.

“What we hope to come out of this is either Isabel Longoria and her management team resign or are fired, but more importantly for the court to actually step in and provide independent oversight over the election process,” Cindy Siegel, the chair of the Harris County Republican Party, said at Monday press conference.

In its lawsuit, the party is raising allegations of several violations of the Texas Election Code tied to the primary election. It also targets Longoria in her official capacity for breach of contract. (In Texas, political parties typically contract county elections offices to run primary elections, though the parties appoint polling judges on election day.)

On Tuesday, a spokesperson for the county elections office said it is still reviewing the suit, but said it included “many exaggerated and misleading statements regarding what actually happened on Election Day in Harris County.”

“Instead of working together to finalize counting the votes, the party is pursuing litigation to undermine the integrity of elections in this state and further deflect from the appalling impacts of SB1 [Senate Bill 1], including the almost 11,000 [mail-in] ballots flagged in Harris County for rejection,” Leah Shah, the spokesperson, said in an email Tuesday. “We will address each allegation in court filings as appropriate.”

The delays began on election night when election workers began compiling vote tallies after polls closed. Like many other Texas counties, Harris recently switched to new voting machines meant to leave a paper trail. After making their selections on an electronic device, voters feed a printed version of their ballot into a scanner to cast their vote. The ballot is so lengthy in Harris that it requires two printed ballots per voter.

But a number of voters faced scanning issues while using the new machines, requiring election workers at the county’s headquarters to review more than 1,500 ballots to ensure they were properly counted. The process proved slow going as county officials also processed results from hundreds of polling locations.

Under both Republican and Democratic administrations, Harris County elections have long been known for slow reporting of election results. More populous than 26 states, the county is Texas’ biggest and typically has the most votes to process. Voting materials, including ballot boxes, must also be transported across the county’s nearly 2,000 square miles back to its election headquarters.

But this year, Harris County did not finish processing election results until 1 a.m. Thursday — several hours past the state’s deadline to finish vote tallying within 24 hours of polls closing. Under scrutiny for the delay, Harris County officials said that adopting best practices — like the national movement toward voting machines with paper trails — would mean a longer counting process.

“We have engaged in what are best practices,” Beth Stevens, Harris County’s director of voting, said at a Thursday press conference after results were finalized. “We have made sure we’re crossing our T’s and dotting our I’s, going through all of our steps required to make sure we’re counting every vote and counting them accurately. We have to grapple with [the fact] that it will take more time.”

That same morning, election workers filled out a new reconciliation form that counties are required to post at the end of election day vote counting to indicate any differences between the number of voters and the number of ballots counted. The figures are considered preliminary and can change as election information and votes, including late-arriving mail-in ballots and provisional ballots, are verified.

The Texas secretary of state’s office noted the 10,000-vote discrepancy Friday when it began reviewing reconciliation forms and reached out to Harris County election officials, a spokesperson for the office said. The next day, Harris County announced the missed votes.

The votes were scanned into the county’s “tabulation computer” but were not properly transferred so they would be reflected in the county’s original election night returns, officials said in a statement late Saturday in which they acknowledged “the seriousness of this error.” The “oversight” was traced to tabulating work in the early morning hours when election workers were still reviewing ballots.

The missed votes will be transferred and accounted for in Harris’ final count on Tuesday when its vote tabulating panel next meets Tuesday afternoon, Shah said.

The county’s missteps have also earned it criticism from the Harris County Democratic Party, which called for a post-election review. But while the GOP is pushing for outside oversight of the county’s elections, local Democrats argued that responsibility should fall to the county’s election commission, a panel that includes the county judge and the chairs of both parties.

“We have been completely transparent in our desire to dig into the details of what went wrong and identify how to make corrections moving forward,” Harris County Democratic Party Chair Odus Evbagharu said in a statement Monday. “We continue to believe a thorough review of election processes is required.”

The last few years of election administration in the state’s largest county have played out against bitter partisan battles. The Harris County GOP has been at loggerheads with the county’s Democratic leadership since losing political control of the county commissioners court and the county clerk’s office, which previously oversaw elections.

That change in power has come with voting initiatives that local Republicans did not warm up to, including a move to countywide voting that frees voters from precinct-based polling places and allows voters to cast ballots at any polling place in the county on election day.

But Democratic stewardship of elections in the county has run into complications, most notably in the 2020 primary when a cascade of election day fumbles left voters at a historically Black university waiting several hours to cast their ballots.

Longoria took over the county’s elections in late 2020 after the county transferred those duties to an appointed election administrator position. That left Longoria to defend the county’s efforts to make voting easier during the coronavirus pandemic — namely drive-thru voting and 24-hour voting — after they drew the ire of Republican lawmakers who ultimately banned those voting options.

Disclosure: The Texas secretary of state has been a financial supporter of The Texas Tribune, a nonprofit, nonpartisan news organization that is funded in part by donations from members, foundations and corporate sponsors. Financial supporters play no role in the Tribune’s journalism. Find a complete list of them here.

This article originally appeared in The Texas Tribune at https://www.texastribune.org/2022/03/08/ballots-harris-county-primary/. 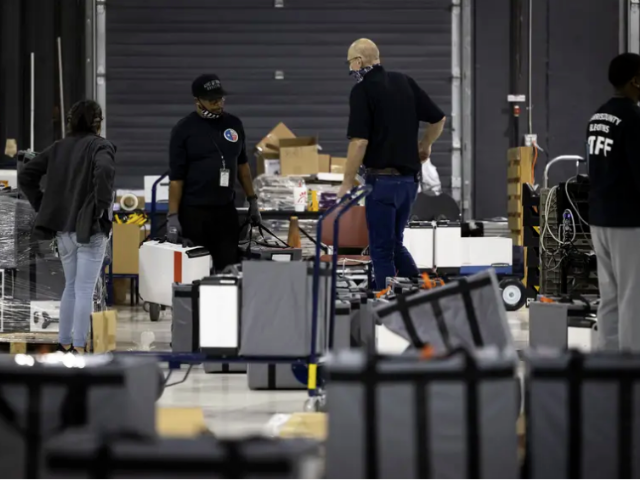