By Allyson Waller and Kevin Reynolds, The Texas Tribune

When the Llano County Library shuts down for three days this week, starting Tuesday, it won’t be for the holidays.

Instead, a group of six librarians in this small Central Texas county will be conducting a “thorough review” of every children’s book in the library, at the behest of the Llano County Commissioners Court. Their mission will be to make sure all of the reading material for younger readers includes subjects that are age-appropriate. A new “young adults plus” section will be added to separate books written for an older teen audience from those geared toward younger readers.

The three-day closure of the library system in Llano County, about 80 miles northwest of Austin, also means a temporary shutdown of its virtual portal through the online book provider Overdrive.

“I think we owe it to all parents, regardless if it’s a school library or a public library, to make sure that material is not inappropriate for children,” Llano County Judge Ron Cunningham said.

The Llano County community’s push to scrutinize the local library’s book stacks comes two months after a Texas lawmaker first questioned the inclusion of more than 850 books about race, equality or sexuality in public school libraries.

And Llano County is not the only community in Texas asking harder questions.

Local public libraries in Texas, including those in Victoria, Irving and Tyler, are fielding a flurry of book challenges from local residents. While book challenges are nothing new, there has been a growing number of complaints about books for libraries in recent months. And the fact that the numbers are rising after questions are being raised about school library content seems more than coincidental, according to the Texas Library Association.

“I think it definitely ramped it up,” said Wendy Woodland, the TLA’s director of advocacy and communication, of the late October investigation into school library reading materials launched by state Rep. Matt Krause in his role as chair of the House Committee on General Investigating.

In response to Krause’s inquiry, Gov. Greg Abbott tapped the Texas Education Agency to investigate the availability of “pornographic books” in schools. In the weeks since, school districts across the state have launched reviews of their book collections, and state officials have begun investigating student access to inappropriate content.

As more residents began turning their sights on local libraries, the state library association set up a “peer counseling” helpline for librarians to get support from others more familiar with book challenges.

“A library may get one or two [book challenges] in two years, or some librarians have never had challenges,” Woodland said. “So this is very rare and very unusual and different from the way challenges have been brought forth in the past.”

In Victoria, about 100 miles southeast of San Antonio, Dayna Williams-Capone says the number of complaints about books is the most she’s seen in her nearly 13 years working at the Victoria Public Library.

In August, Williams-Capone, the director of library services in Victoria, said her office received about 40 formal requests for review of books, primarily books for children and young adults that touch on topics of same-sex relationships, sexuality and race.

After Williams-Capone and her staff reviewed the requests, they decided to keep the books in the library. Residents who filed the complaints pushed forward, appealing the decision to the library’s advisory board for about half of the books, Williams-Capone said.

Last Wednesday, the library’s board voted not to remove the books from library shelves.

“I don’t think there’s a danger in asking the questions and having a civil conversation and learning from each other,” Williams-Capone said. “I think that the danger is when we lose that big-picture view of who all is a part of our community, and that the needs of some members of our community might be very different than what we think our own personal needs are or our own family needs.”

One Victoria resident who pushed for book removals was Cindy Herndon.

“It’s nothing that I have against anybody in any community,” said Herndon, 64. “I don’t have any resentment or lack of respect for them. It’s just about protecting the children and exposing them to things that they really don’t need to see right now.”

One of the books she wanted removed was “The Black Flamingo” by Dean Atta, a coming-of-age novel about a mixed-race gay teen who becomes a drag artist.

After reading the book, Herndon said she was opposed to it because to her it seemed to “sexualize children, especially into alternate lifestyles, and make them want to be someone else than who they were born to be.”

Another Victoria resident, Amy Garvel, joined other residents, and the group combed through the library’s online catalog. They compiled a list of more than 200 books they found inappropriate, ranging from picture books to young adult books, Garvel said. Garvel herself submitted two requests for removal for the books “If I Was Your Girl” by Meredith Russo and “Rick” by Alex Gino.

Garvel, who describes herself as a conservative and has a 9-year-old son and 13-year-old daughter, said she’s been very careful about what content they consume.

“My goal is really to protect the children in our community in general, not just my own children,” said Garvel, 43. “I’m hoping that [the library] sees that we’re not trying to censor books that we’re trying to protect our children. I mean, the library was one of the last places that we could feel safe.”

How the process works and why it’s getting blowback

Local public libraries are not regulated by the state. Instead, they are usually part of a county or city budget funded by local taxpayers.

Williams-Capone, the Victoria library services director, described how books are selected in the first place, and her library’s process is typical for most. Staff members peruse lists of bestsellers and literary award winners. They scan literary journals. Library staffers also consider how often visitors check out certain titles or subjects to determine future purchases.

Rules for public libraries, including complaints about content, are determined at the local level.

A list of labels and their meanings helps to guide readers on the contents of certain books at the Llano County Library. Credit: Sergio Flores for The Texas Tribune

When a resident challenges a book, “there’s a process in place,” to handle that complaint, said Woodland, the TLA spokesperson. That process is typically crafted in writing by local governments with input from library staff.

But in these latest challenges, there have been complaints from some local residents that the process may give library staff too much of an upper hand.

“Jack of Hearts (and Other Parts)” by L. C. Rosen, which follows a gay teenager who starts a teen sex advice column, has seen challenges in Irving and elsewhere.

At the urging of local residents, City Council members were meticulously briefed on how the Irving Public Library handles complaints against books kept in its libraries. After the book underwent a “request for consideration,” which included an initial staff review and an appeal, it was kept in circulation.

Irving Mayor Rick Stopfer said he read the book in full, and even though he didn’t particularly care for parts of the book, he understood the need for it.

“If you read the full book, it tells you that you can have a loving relationship with a person of your same gender,” Stopfer said during an Oct. 14 meeting. “Everybody’s not going to like everything. It’s not something that I enjoyed reading, but I understood what the purpose of it was, and what the outcome was supposed to be.”

In that same Irving City Council meeting, Flory Malloy, a self-described mother of seven with a doctorate in biblical studies, told council members she felt the library system and its appeal precess seemed pointless because in the end, books that are challenged remain on the shelves.

“The process ended with a denied appeal to remove the book,” she told council members as she described one challenge that appeared to go nowhere. “It seems to be a point of pride for the Irving Public Library that they have never removed a book as the result of this process, so what’s the purpose of this time-consuming review process?”

In Tyler, city spokesperson, Julie Goodgame confirmed that library officials there have been informed about “concerns” regarding book content. But there’s been no specific complaint about a particular book, she said.

Back in Llano County, Cunningham, the county judge, said the library system’s three-day closure is the first of perhaps many changes for the library. He said the county plans to soon establish a library advisory board that will help establish policies on requests to reevaluate books in circulation.

Although parents and lawmakers have stressed they are attempting to protect children from inappropriate content, authors of works that have been at the center of these disputes see the fights as a way to stifle and censor diverse representation in literature.

And librarians see their role as offering reading material for a wider audience.

“These efforts to mute or censor diverse voices in books is part of the just overall extreme divisiveness in our country that was really just exacerbated by the pandemic, [and] the actions taken by Rep. Krause and others have added fuel to that,” Woodland said.

She understands there will be those who may not like all of the books in a library. That’s not the point of a public library, she said.

“No book is right for everyone, but one book can make a big difference in one person’s life,” she said. “That’s what libraries are about — providing those windows and doors and mirrors to the community.”

This article originally appeared in The Texas Tribune at https://www.texastribune.org/2021/12/20/texas-library-books/. 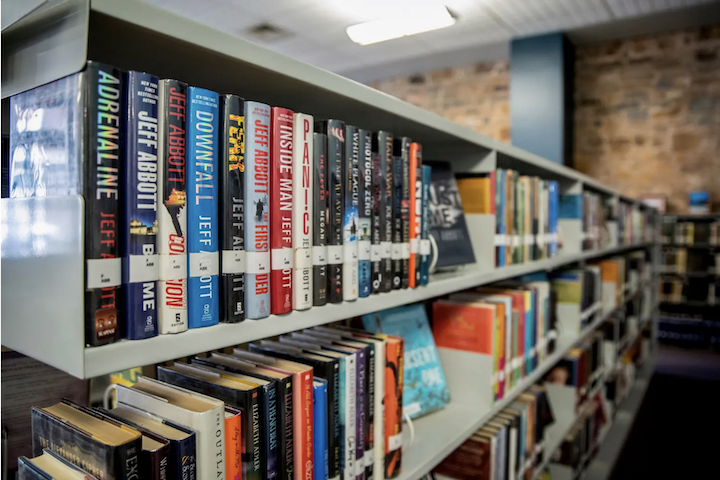