Mandatory paid sick leave, a policy proposal that’s faced consistent pushback from Texas’ leading Republicans and conservative groups, is once again being thrust into the spotlight as the state and workers’ rights groups seek to quell the spread of the new coronavirus. 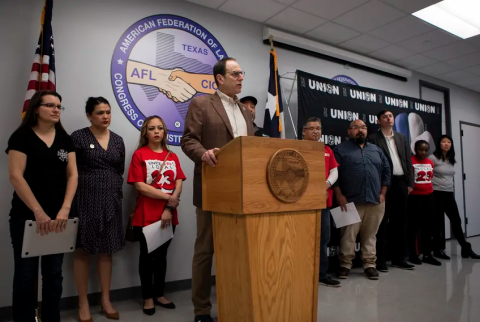 Labor groups say policies requiring paid sick leave would help contain the virus, allowing employees to stay at home when they get sick and not risk passing the illness on to others. Congressional Democrats have floated an idea of requiring 14 days of paid sick leave during an emergency health crisis. The Centers for Disease Control and Prevention has advised businesses to establish flexible sick leave policies that do not punish workers.

But in Texas efforts to mandate sick leave for businesses statewide have faced stiff resistance from state leaders, who denounce the idea as a costly government overreach. Austin, San Antonio and Dallas have all passed paid sick leave ordinances, though Dallas is the only major metropolitan area to see its proposal come to fruition thanks to court challenges in the other two cities.

At the height of last year’s legislative session, Republicans were under intense political pressure to overturn those city ordinances. While bills charged with doing so had widespread support in the Legislature, they failed after becoming ensnared in a fight over protections for LGBTQ Texans. A last minute Hail Mary in the form of court challenges from businesses and a conservative group helped stall the proposals in San Antonio and Austin.

Now, amid a coronavirus epidemic, workers groups are raising the issue again.

“No Texans should have to choose between going to work sick so they can pay their bills and staying home without pay to keep our communities safe,” Rick Levy, the president of the Texas AFL-CIO, said. “In the case of the coronavirus, that bad choice could be a matter of life and death.

“This isn’t just the moral thing to do, it is essential if we’re going to be successful in eliminating the spread of this virus,” he said.

There is no federal law requiring employers to provide paid, job-protected sick leave; 59% of small business employees have it, according to the Bureau of Labor Statistics. Ten states, 20 cities and three counties also mandate it.

White House officials reportedly presented President Donald Trump on Monday with a list of policy changes to help stymie the economic fallout of coronavirus, including paid sick leave and emergency help for small business, according to multiple reports.

Joe Montemayor, organizing coordinator at the Texas State Employees Union, said the group is asking the state for “meaningful action” in light of the outbreak, including asking Gov. Greg Abbott to enact “emergency leave for employees to ensure they don’t have to come to work when sick.”

“We’re also asking for temporarily changing administrative requirements for extended sick leave and policies related to employees donating sick time to encourage more employees to stay home instead of coming to work,” he said. A spokesperson for Abbott did not immediately respond to a request for comment.

On Tuesday, Montemayor and other allies argued that without sick leave, or without enough of it, employees risk spreading the disease or staying home and losing their jobs.

“Citizens should be allowed to take paid time off,” said Yvette Leija, a member of UNITE HERE Local 23. Leija stopped short of asking for a special legislative session to implement a new policy, but did call for businesses involved with lawsuits that stopped the progression of paid sick-leave ordinances in Austin and San Antonio to abandon their challenges to the proposals.

Rob Henneke, general counsel for the conservative Texas Public Policy Foundation, which brought the lawsuit on behalf of the businesses, told The Texas Tribune on Tuesday afternoon that he “disagreed” with people “trying to create a public panic and use fear over this public health issue to justify a city mandate that Texas courts are in unanimous agreement is unconstitutional."

“The truth is that a vast majority of employers in Austin do provide some form of paid leave,” he said. “But those decisions are best left to employers and their employees.”

Nationally, several businesses have already expanded sick leave protections to its workers. On Monday, Uber announced that it will offer drivers and delivery people 14 days of paid sick leave if they contract the virus or are placed in quarantine. Olive Garden, Longhorn Steakhouse and other restaurants, meanwhile, announced that they are providing paid sick leave to all hourly workers who are not currently covered by a policy.

But as the state grapples with how to best respond to the virus, its economy has also been affected by the outbreak in ways large and small, including a Monday oil crash and the cancellation of South by Southwest.

“Texas working families are right to be nervous about the coronavirus,” Levy said. “We certainly don’t pretend to have all the answers, but we have long experience in advocating for safety first in the workplace.”

Disclosure: Uber, the Texas Public Policy Foundation and SXSW have been financial supporters of The Texas Tribune, a nonprofit, nonpartisan news organization that is funded in part by donations from members, foundations and corporate sponsors. Financial supporters play no role in the Tribune's journalism. Find a complete list of them here.

This article originally appeared in The Texas Tribune at https://www.texastribune.org/2020/03/10/coronavirus-revives-push-paid-sick-leave-rules-texas/.