The two remaining candidates for the City Council District 2 seat met May 16 and took on issues such as development, homelessness, protecting the most vulnerable community members, and the digital divide.

Councilwoman Jada Andrews-Sullivan and challenger Jalen McKee-Rodriguez emerged as the top vote-getters in the May 1 election, and are campaigning for a June 5, 2021 runoff race. 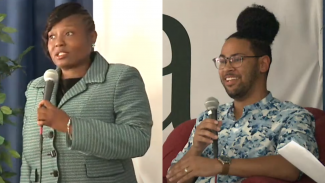 McKee-Rodriguez said District 2 needs a different type of representation at City Hall. He added District 2 residents require a council member who better and consistently engages the entire community, and not just special interests.

McKee-Rodriguez said his campaign refuses to accept contributions from developers who, he adds, hold too much sway on city policies and actions through through campaign donations and appointments to city boards and commissions.

Additionally, Andrews-Sullivan said the city continued to serve constituents during the COVID-19 pandemic “by making sure we got the streets worked on, that we got infrastructure that speaks to areas who have not seen (improvement) in over 20 years, that we continue to work with our community neighborhood association presidents to bring in things that are needed in our community.”

The candidates were asked how they’d close the digital gap and increase internet service in District 2. McKee-Rodriguez said, if elected, he’d use a council consideration request and propose a right-to-internet ordinance that would expand broadband availability citywide.

Andrews-Sullivan said the city has been working with school districts to ensure students could access free WiFi service especially during the pandemic, which sparked school closures and brought about remote learning.

She added the city is working to further expand broadband service to community centers and elsewhere.

For example, the city’s Development Services Department could improve the way it informs residents about proposed and planned developments and zoning matters via community outreach coordinators, she said.

Such personnel, Andrews-Sullivan explained, are going “door to door in our most vulnerable communities that do not have access to the internet, and we make sure we do that through health outreach and health coordination.”

McKee-Rodriguez urged the city to enhance community outreach. He criticized the timing of local governmental meetings as inconvenient for many residents who wish to attend for cases and crucial votes.

He also dinged what he called the impersonal way the city and other local governmental agencies conduct meetings and gather public input, especially online.

“As a teacher, I’ve had to adapt. I’ve had to make sure my lessons are engaging, thoughtful and are interactive. That is not happening with any of the public input meetings,” he added.

Regarding homelessness, McKee-Rodriguez expressed support for the city acquiring motels and converting them into emergency shelters. He also called for a ban on architectural elements in public areas that prohibit a homeless person from resting there.

“We need to counter these ideas and challenge ideas that push people away. They’re not eliminating the problem of homelessness, they’re pushing them into other neighborhoods and into other sides of town,” he added.

McKee-Rodriguez also said the city must put more resources into treating the symptoms of poverty and homelessness, and how that can shore up public safety concerns.

Andrews-Sullivan said the city has taken a housing-first approach. The local Housing First Community Coalition Inc. plans to redevelop the former Towne Twin Drive-In on the East Side as a permanent housing community for unsheltered senior citizens.

She also said the city will grow the practice of acquiring and turning motels into emergency shelters, such as what happened in 2020 during the pandemic.

“The process has started, now let’s expand on it,” she added.

The two candidates did agree that the city could and should do its part to address climate change, local environmental issues and public health.

Andrews-Sullivan said the city’s climate action and adaptation plan is solid guide to dealing with challenges such as fallout from February’s severe winter storm, reducing pollutants that contribute to poor air quality, and food insecurity.

She also said the city must help residents in aging homes shore up their property via such measures as weatherizing in order to cut energy costs and boost their own personal safety.

“We must do everything we can to ensure our residents do not have to bear the burden or carry the costs of what happens,” she added.

McKee-Rodriguez said the city’s climate action plan should be even bolder, and urged local officials to invest in green energy. He also backs calls for closure of CPS Energy’s Spruce coal plant on the South Side.

McKee-Rodriguez agreed with the incumbent on a need for helping residents to weatherize their homes “because there were people literally left out in the cold in February.”

He also agreed with increasing the number of community gardens and developing a grocer incubator program so that more people learn to grow and market produce in their neighborhoods.

The candidates answered questions about the outcomes of two initiatives on which San Antonians voted on May 1. Proposition A, which passed, lets the city consider issuing bonds for such things as affordable housing.

Andrews-Sullivan said supporting more development of affordable housing is on the city’s radar, but that use of such bond monies must be done collaboratively with input from the private sector.

“It comes with the voices from our community, the voices of our neighborhood association presidents, and voices of each and every one of us who ask where do we want to see this happen,” she added.

McKee-Rodriguez said future affordable housing must built and marketed toward residents who still may not earn enough to live in existing newer housing stock that are called affordable by their developers.

“I think we’re going to have to be hypercritical of what projects get funded, because what I’d hate to see is Prop A be used as a tool to funnel money into the pockets of developers,” he added.

McKee-Rodriguez backed Prop B. He said its failure at the polls does not give him confidence that stronger police accountability measures will result from current contract negotiations between the city and the police union.

“(Prop B) had the potential to help mend police-community relations because there’s damage that, right now, we don’t see a way out of,” he added.

Many Prop B proponents, before the election, criticized council members for not sharing a public, official position on the proposal. Andrews-Sullivan said, as an elected officeholder, she could not express a formal stance on a city measure.

Andrews-Sullivan also said, given current police contract talks, there’s an opportunity to push certain things, such as the police chief the final say on firing an officer investigated for misconduct.

Andrews-Sullivan also said accountability comes from recent actions such as a ban on no-knock warrants and chokeholds, and ongoing initiatives, such as changing how the police answer calls where mental health or domestic violence is concerned.

“There are still conversations we have to have, and make sure our community is part of that,” she added.

LOCAL will be a media partner in a District 1 election runoff forum 7:30 to 9 p.m. May 19 at The Cove. NOWCastSA will livestream the forum. Residents are encouraged to register online and submit a question to be asked at the event.