Ten of 12 candidates running for the San Antonio District 2 City Council seat answered a wide range of voters’ questions during an online forum ahead of the May 1 elections.

Andrew Vicencio and Michael John Good were invited, but did not complete the technical requirements necessary to join the event.

Many of the participants touted their experiences working with the city and/or within District 2, which covers much of the East Side, part of the near-Northeast Side and Mahncke Park.

Answering a question from moderator and NOWCastSA Director Charlotte-Anne Lucas, the candidates pledged to ensure diverse, adequate representation on city panels; members are appointed by the mayor and each council member.

Villanueva committed to ensuring more residents step up to apply for positions on boards and commissions such as Planning, Zoning and Historic Design and Review.

Cleaver said District 2 has been underrepresented in recent years: “If (appointees) don’t have the best interests of District 2 in mind, they will not sit in that seat.”

Clark said diversity and equity are part of the selection process, and agreed with Brown that a council member should “seek the experts” and not just rely on applications.

McKee said it’s important to prioritize those residents who have ties to the community they would represent.

Perry said members of some panels have been there too long, adding the city needs new appointees with fresh ideas.

The candidates vowed to improve City Hall’s public engagement and outreach, with many saying they would personally attend as many live and virtual meetings of neighborhood associations and other community groups as possible.

Dawkins said he would be proactive and reach out to such neighborhood organizations and set up gatherings with them.

“Those constituents are what makes it all go,” he added.

Clark said the city must make sure all residents have every way possible to communicate with their elected officials.

“You have to open all lines of communication and make sure everyone has a seat at the table,” he said.

Perry wants to create hubs for community groups to get resources to help their residents.

“Once we start utilizing those things, we can be successful,” he added.

Booker called for a community dashboard to continuously track residents’ requests for assistance on specific issues.

“If we know a neighborhood has a standard of stray dogs or speeding, we need to know that,” he said.

McKee, a former aide to Andrews-Sullivan, said he’d form an advisory board to reach out to neighborhood groups and establish full Friday business hours for constituents at City Hall and at the District 2 field office.

Brown echoed Booker’s community dashboard idea, saying she would do everything to follow up on residents’ issues, so long as they’re officially noted somewhere.

“We have changed (the Unified Development Code) to ensure new development and redevelopment reflects their surrounding communities,” she added.

McKee said District 2 leaders must do a deep dive into affordability and poverty issues, and be honest with residents facing critical zoning situations.

“We also will not allow developers to come in and build something that’ll compete and drive up tax rates,” she added.

Villanueva said it’s vital community leaders "work with developers and make sure they understand that we want developers who will work with small businesses and not take advantage of our neighbors.”

Darden urged the city to empower homeowners with information about how they can maintain their property.

The candidates also addressed homelessness. Villanueva said the city should talk with law-enforcement officials to see what they’re encountering on the ground level and expand on what the city can do differently to assist helping homeless individuals.

Perry supports connecting the homeless with next of kin, and assisting homeless children, teenagers, veterans and the LGBTQ community.

McKee, who backs a housing-first approach, said, “Housing first prioritizes getting people off the streets, into a shelter and getting them access to mental-health services.”

Andrews-Sullivan said the city will continue looking at green spaces, vacant warehouses and motels as potential places for additional shelters and traditional housing.

“We continue to work on the homeless outreach initiative and the strategic plan the city has put in place,” she added.

Villanueva said the city should work with neighborhoods to improve safety. Andrews-Sullivan supports a greater police presence, and mechanisms where residents may safely speak out about violence in their neighborhood.

Clark and Perry back reinvesting in efforts to reduce recidivism, while Cleaver urges the city to enhance successful public-safety initiatives in concert with the wishes of District 2 residents and community leaders.

McKee said the city must improve streetlights in certain areas, and work toward what is best in specific neighborhoods.

Finally, the candidates addressed accountability when it comes to policing.

San Antonio voters will consider two proposed city charter amendments, with one — Proposition B — calling for the elimination of police officers’ collective-bargain rights in union contracts with the city.

Police reformers say reining in collective bargaining will compel the city and the San Antonio Police Department to confront disciplinary issues and cases of excessive force.

Andrews-Sullivan called accountability important, but expressed concern that Proposition B, if approved, will not achieve reformers’ desires.

Villanueva backs demands for more accountability and changes in the city/police union pact, but said she does not support Prop B.

Other District 2 hopefuls voiced support for Prop B. Brown said the Police Department should strive for greater diversity.

“Just because you provide a particular service doesn’t mean you shouldn’t be held accountable to the people you serve,” she added.

McKee called for additional police reforms, and wants to eliminate the evergreen clause, which keeps in place terms of an expired contract, such as the pact between the city and police union, when a new one hasn’t been negotiated.

Clark agreed other steps toward police reform are necessary:  “We must act now to ensure the safety of the community.”

Cleaver said the Police Department needs more self-discipline and to increase socioeconomic diversity within its ranks.

The other proposition on the May 1 ballot lets the city issue bonds for permanent public improvements, such as building affordable housing, or others not prohibited by the Texas Constitution.

Click here or here to view the entire forum. Upcoming editions of LOCAL Community News will preview this and many other contested races in and around San Antonio ahead of the May 1 elections. 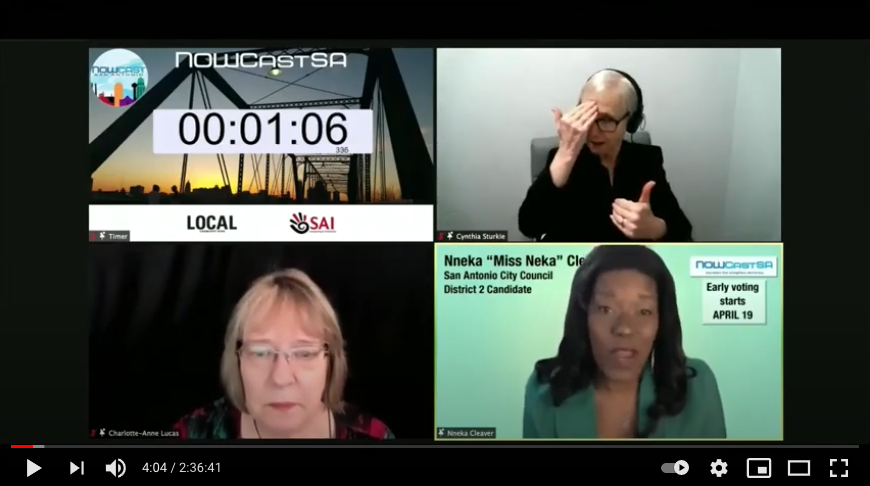