Criminal trespass charges have been dropped against 13 of the 16 supporters of the DREAM Act who were arrested after a protest at the offices of Sen. Kay Bailey Hutchison, a defense attorney said Friday.

They were demanding to speak to the senator, a Texas Republican who could have been  a key swing vote in the Senate to pass the immigration legislation.

Defense attorney Ricardo Briones said the charges were dropped at different court hearings held throughout the city on Thursday, Jan. 6.

"We're very ecstatic and believe the charges will be dropped against the rest," said Briones. "It's great because now the students don't have to worry about having a (criminal) record when they graduate from college."

Hearings on the charges against the remaining three, all students at the University of Texas at San Antonio, are scheduled next month.

“It’s looking like we are getting the charges dismissed,” said Melissa Rodriguez,  21, a sophomore at UTSA. “There’s really no evidence that we did anything wrong.”

UTSA freshman My Le said her court appearance was rescheduled until next month, along with fellow student Yasmina Codina.

“Our cases were not dismissed because our courts had new judges,” said Le.

The UTSA students and supporters began a hunger strike Nov. 10 to press for the legislation. On Dec. 8, the DREAM Act passed the House by a 216-198 vote. But on Dec, 18, the measure died in the Senate, when it falling five votes short of the 60 votes needed to stop debate and proceed to a vote. Both Hutchison and Sen. John Cornyn, R-Tx, voted against moving the bill forward.

DREAM is the acronym for the Development, Relief and Education of Alien Minors Act that would provide a path to legalization for undocumented immigrants who came to the United States before the age of 16 and who graduate from college or serve in the U.S. military for at least two years. 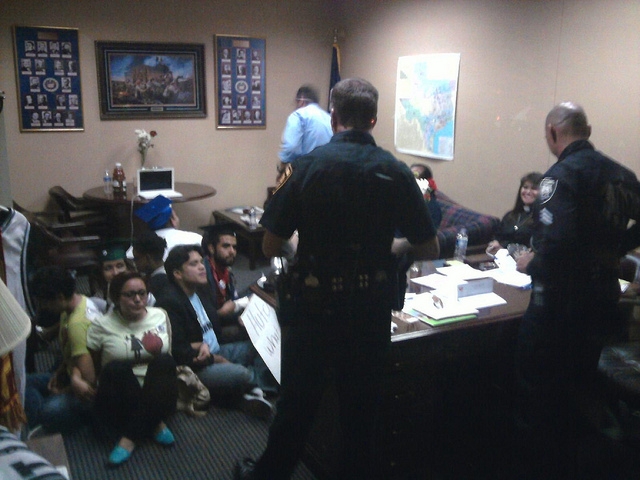