As I stood on the sidewalk of Commerce Street watching the thousands of people marching by me, people who had come out in support of the International Women’s Day March, I felt a great sense of pride and joy.

This pride and joy came from seeing the marchers, especially the women, because many of the faces I saw were of women leaders in our community.

I saw the faces of Graciela Sanchez, Patricia Castillo, Antonia Castaneda and many, many more I've known for years and have seen working in our communities.

These strong women take on the many issues that women face everyday, such as sexism, domestic violence, education, immigration, police brutality, and much more. These are the many reasons why women leaders in San Antonio march every year to celebrate International Women’s Day.

It's a time to honor the power women possess, their triumphs, as well as the struggles we still have to conquer.

This year, the themes of the march were the issues of immigration, war, domestic violence and police brutality. Throughout the course of the march, I heard chants of the struggles that women still face here in San Antonio.

For example, women and other workers at the Grand Hyatt are struggling to form a union to help them get better working conditions; about the River Walk that employs hundreds of women, many whom are probably single mothers who deserve fair wages to take care of their children, and about the San Fernando Cathedral, where many women of another sexual orientation feel that the Church doesn’t accept them.

These and many other subjects made me realize how much more work we have ahead of us. This brought on a feeling of frustration, realizing we still have to take on issues that shouldn’t even exist.

This feeling of frustration only grew bigger and bigger by the time that we got to Milam Park, where women who were invited to speak such as: Rosa Clemente, Tammy Gomez, Kiawitl Xochitl, Nadine Saliba, Denise McVea, Lucy Martinez, My Le shared their stories with those gathered around the plaza.

At the end, when part of me felt angry about all the injustices happening not only in my city but also all around the world, I saw Sandra Cisneros, one of my favorite writers.

I approached her and told her how grateful I was that she joined the DREAM Act hunger strikers when we were protesting outside Sen. Kay Bailey Hutchinson’s office because I never got a chance to do so, since several of us happened to get arrested.

She told me how she looked up to us for what we did, and suddenly, all my anger and frustration left me. I realized that all the work we all do doesn’t go unnoticed, that it's not in vain. Even though changes don’t happen overnight as we’d like for them to, they do happen.

So to all the people, especially women that work in our communities to make it a better place: never give up, your work isn’t taken for granted, follow what your heart tells you, and changes do happen! 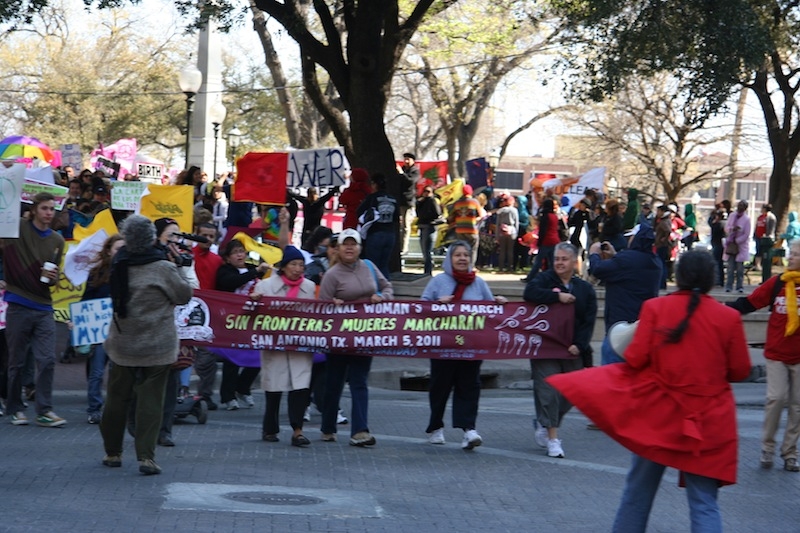