When the coronavirus pandemic struck America, infecting and hospitalizing thousands of New York City residents in a matter of weeks, Natasha Gonzales knew she needed to do something. Then as the virus invisibly crept its way to San Antonio and shelter-in-place orders were issued, she delivered meals to seniors and then volunteered with the San Antonio Food Bank.

“I felt it wasn’t enough. I didn’t feel right being at home knowing I could do more,” said Gonzales, a 33-year-old, registered nurse, who hadn’t worked outside the home since giving birth to her youngest child three years ago.

Soon after, Gonzales learned from a friend about a health care staffing agency that was hiring medical personnel to go to New York City to work on the frontlines as the virus began overwhelming the battered city. She called their number and was hired over the phone.

“I kept waking up with this nagging feeling that I needed to go to New York. I prayed about it and asked that if it’s God’s will, then let it be done,” she said.

Although Gonzales, who is a wife and mother to three children, ages 11, 7 and 3, hated the idea of leaving her family, she nonetheless had to follow her heart. She hugged and kissed them good-bye, and on April 13 left for New York City. She’s been working in Brooklyn ever since at a facility that cares for and treats about 300 patients, many of them elderly. Some have the virus, others do not.

Is she afraid of catching the COVID-19 virus? “No,” she said, adding that staff is well-equipped with personal protection gear. “I knew what I was getting into when I signed up.”

Gonzales and about 1,500 other out-of-state nurses stay in Manhattan hotels. They board a bus at 5:30 a.m. for the trip into Brooklyn to the facility where they work 12 hours a day. “Sometimes, it gets really hectic, but for the most part it’s OK,” she said. “Everybody is working really hard. It’s definitely an experience of a lifetime. I’ve met some amazing nurses, doctors and nurse practitioners from all over the world.”

And there are the sad moments when they lose a patient to the virus. “It’s devastating because that’s someone’s mom, dad or brother,” she said. “It’s not just the elderly who are vulnerable. We all are, not just the immuno-compromised.”

Of course, she misses her family, so she Facetimes them every night. ”I ask about their day, and they ask about mine. They’re proud of me.”

Her husband, Albert, said he wholeheartedly supports his wife’s decision to help on the frontlines of New York.

“We talked about it before her decision was made, and we both understood what it would involve, and we weighed the risks,” said Albert, who, along with Natasha, owns and operates Mira Medals, which makes Fiesta and 5K medals, pins and T-shirts. “Yes, we would rather have her here, but her heart was telling her she needed to do this. We have children and pets, and I had to navigate keeping them on track with home schooling. But it’s all worked out.”

Initially, Gonzales was supposed to be in New York for 21 days, but she extended her contract to keep helping at the facility. For the time being, she’s not certain when she will return, or, at least, until as long as she is needed. 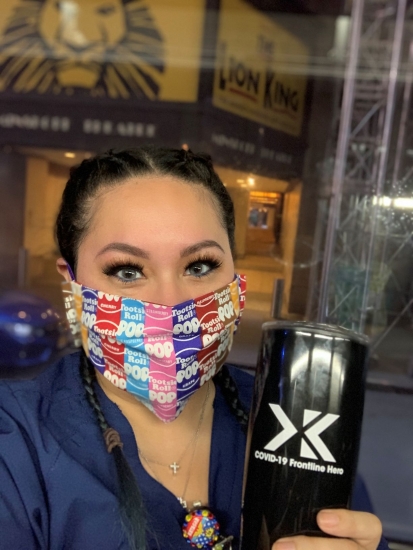