By Abby Livingston and Patrick Svitek, The Texas Tribune

LAREDO —U.S. Rep. Henry Cuellar, the last anti-abortion Democrat in the U.S. House of Representatives, boldly declared victory just before midnight in his nail-biter primary runoff race. But his progressive challenger, Jessica Cisneros, refused to concede, as the race was separated by less than 200 votes with all counties reporting their votes.

“This election is still too close to call, and we are still waiting for every ballot and eligible vote to be counted,” she said in a tweet, shortly after Cuellar declared himself the winner.

Just before midnight in Texas, Cuellar led Cisneros by a mere 177 votes.

At the time he declared victory, no major news organization had called the race.

“Tonight, the 28th Congressional District spoke, and we witnessed our great Democratic system at work,” he said in a statement. “The results are in, all the votes have been tallied — I am honored to have once again been re-elected as the Democratic Nominee for Congress.”

With such a narrow margin, it is likely the race may not be decided for days. Mail-in votes from domestic voters can still be counted if they were postmarked by Tuesday and are received by counties by 5 p.m. Wednesday. The race is also within the margin that Cisneros can request a recount.

Cuellar told reporters at his campaign headquarters that he’s undeterred by the close call.

“I know what it is to do a recount in an election contest,” he said, referring to a 2004 recount that ended with him becoming a congressman. “We have very good attorneys and if we need to, we will defend our election victory.”

The race was a dead heat on Tuesday night and the two Democrats took the lead at different points throughout the night as the district’s most rural counties delivered consequential vote totals that swung the race back and forth.

The race is a rematch from 2020, when Cuellar narrowly defeated Cisneros in the March primary of that year. Earlier in the campaign this year, he appeared to be on stronger footing than the previous cycle. That all disappeared in January, when the FBI raided his home and campaign office weeks before the primary election. He has denied wrongdoing, and his attorney has said that Cuellar is not the target of the investigation.

Cisneros effectively capitalized on this development in both fundraising and in a television advertising campaign. And in the March contest, Cuellar was narrowly forced into the runoff election.

Cuellar appeared even more endangered earlier this month, when Politico reported on a leaked draft indicating that the U.S. Supreme Court was poised to overturn Roe v. Wade. As the last anti-abortion Democrat in the House and with a looming runoff with Cisneros, an energized pro-abortion movement turned its energy on the Laredo congressman.

But Cuellar also benefited from his deep connections to the community.

Whoever wins will ultimately face off against Republican Cassy Garcia, former U.S. Senate staffer, who won her own primary Tuesday night.

This once Democratic stronghold is now being labeled a “toss up” seat in the November general election, as Republicans turn their efforts toward South Texas domination. Both Cuellar and Cisneros have their weaknesses in a November race. Cuellar could again be damaged by FBI investigation, if not cleared by then, and Cisneros, some political analysts predict, is too progressive for the region.

Beyond differences in abortion, the pair are at odds on an array of issues that include border security, energy and environmental policy and the experiences they would bring to public service.

Cisneros and the many progressive groups that backed her repeatedly hammered Cuellar for taking campaign donations from the private prison industry, the oil and gas industry and health insurance companies.Cuellar also has broken with the party to side with Republicans who wish to extend Title 42, a Trump-era health policy that allows immigration officials to expel migrants quickly, even those seeking asylum, because of COVID-19 concerns.

Cuellar spent much of the campaign making the case that he is uniquely able to help the Laredo-based district as a member of the House Appropriations Committee. He and his local allies praised his efforts to bring back funding, particularly transportation funding that supports trade within the border community.

Cuellar's 177-vote lead did not crystallize until shortly before midnight. As the wait for results dragged on, his election-night party at a Laredo event center thinned out and was mostly empty by 11:30 p.m. But reporters caught up with him at his nearby campaign headquarters, where an explosion of cheers could be heard upstairs at 11:50 p.m. when the final precincts came in. Some supporters came running downstairs blowing airhorns.

Asked if the tight race made him rethink his politics at all, Cuellar said he believed the Democratic Party had "gone a little bit to the left in many ways" and he wanted to "stay true to my principles." But he also acknowledged he could get to know areas of his redrawn district better, including parts of San Antonio, where Cisneros dominated.

As for the impact of the Roe v. Wade news, Cuellar said abortion is an "important issue" but that other issues matter in his district, like border security and oil and gas.

"They thought that they were gonna win on one issue," Cuellar said. "This district is not a one-issue district."

And Cuellar professed confidence in his ability to withstand the GOP push to flip his seat in November. Cuellar suggested his independent streak would insulate him from Republican criticism that would have stuck more easily to Cisneros, saying the GOP is "not gonna be able to attack me on issues about the border, fighting for Border Patrol, making sure that we don't have open borders."

"We're chipping away at that belief that South Texas doesn't deserve better," she said. “Tonight we have already shown that our dreams are so powerful that they are powerful enough to take down — and take on — a machine," she said.

Across town, Cuellar was jubilant as he spoke with reporters about his declared victory. He told reporters they would be surprised by the congratulatory texts he was getting from both Democratic and Republican colleagues. And, not shying away from his friendliness across party lines, he pointed out that the crowd at his campaign office included Lamar Smith, the former longtime Republican congressman from San Antonio.

Disclosure: Politico has been a financial supporter of The Texas Tribune, a nonprofit, nonpartisan news organization that is funded in part by donations from members, foundations and corporate sponsors. Financial supporters play no role in the Tribune's journalism. Find a complete list of them here.

Tickets are on sale now for the 2022 Texas Tribune Festival, happening in downtown Austin on Sept. 22-24. Get your TribFest tickets by May 31 and save big!

This article originally appeared in The Texas Tribune at https://www.texastribune.org/2022/05/19/henry-cuellar-jessica-cisneros-runoff-texas/. 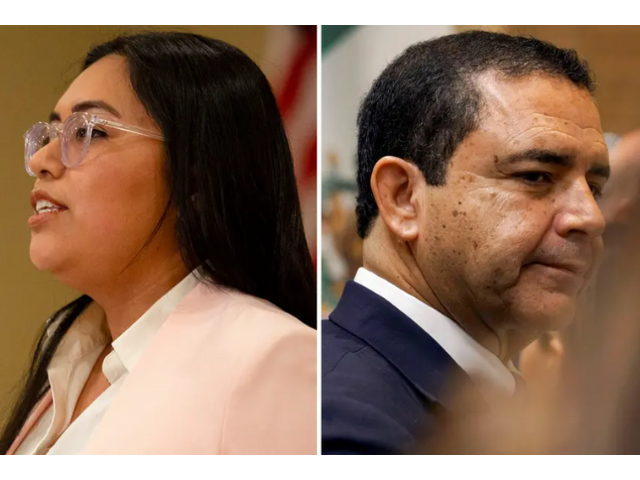