A school shooting in Uvalde that left 19 children and two teachers dead. The end of a nearly 50-year-old constitutional right to an abortion.

A history-making spring in Texas is laying the groundwork for a contentious final four months in the race to lead the state, where Republican incumbent Gov. Greg Abbott remains the favorite but is confronting his toughest Democratic opponent yet in Beto O’Rourke.

While O’Rourke works to harness the anti-incumbent energy spurred by the seismic events of the past few months, Abbott is banking on a general election centered on stronger issues for him: the economy and the border. But even as the national environment looks bleak for Democrats, O’Rourke has been able to keep the race competitive in Texas — and Abbott’s campaign is not taking any chances.

“People are energized right now, but you know, our job is going to be to keep them that way up until Election Day on Nov. 8,” said Kim Gilby, chair of the Democratic Party in Williamson County, a battleground county north of Austin that in 2018 went for both O’Rourke for U.S. Senate and Abbott for governor. “We can’t just lose sight — there’s so much at stake right now.”

Gilby added she was not worried about O’Rourke’s ability to keep people engaged, calling him the “Energizer bunny” of the campaign trail.

Abbott still carries most of the advantages in the race — money, for one, and a midterm election that is expected to favor Republicans across the country. The governor’s allies argue that voters are more worried about the skyrocketing inflation and illegal immigration — and that O’Rourke cannot separate himself from President Joe Biden, who is very unpopular in Texas.

“First and foremost, those [social] issues won’t overcome the reality of Biden’s economy and when you ask Texans what are their biggest issues, their answers are inflation, the economy and the border,” said Dennis Bonnen, the former Texas House speaker, adding he doesn’t think attitudes in Texas about abortion and guns are enough to move the needle. “Those are issues that have been around forever. The lines have been drawn … and I don’t see significant movement either way.”

Abbott himself has downplayed the political impact of Roe v. Wade getting overturned, arguing that his gubernatorial race in 2014 against then-state Sen. Wendy Davis was a “referendum on the issue of abortion” and he won resoundingly.

To O’Rourke and his supporters, though, this spring has been game-changing. His campaign said it has had 52,000 volunteer shift sign-ups in the five weeks since the Uvalde shooting, a 300% increase over the five weeks prior. After the Roe v. Wade ruling, which came on a Friday, the campaign set out to knock on 30,000 doors over the following weekend and hit 30,279 through 87 separate block walks statewide.

“For us to do that four months away from when this election is decided just shows you how energized the people of Texas are,” O’Rourke said on a Facebook Live afterward.

He also touted a Quinnipiac University poll in mid-June that showed him trailing Abbott by 5 points. The same pollster found O’Rourke behind by 15 points in December.

“The momentum, the speed at which we are catching up and closing the gap, is amazing,” O’Rourke said. “And that was before the Dobbs decision [that overturned Roe v. Wade], that was before it was reinforced that Greg Abbott signed legislation that outlawed abortion in the state of Texas with no exceptions for rape or incest.”

To be sure, O'Rourke has continued to talk about issues that have animated his candidacy from the start — like the 2021 power-grid failure — but the headlines of recent months have given his campaign a new trajectory.

After both the mass shooting in Uvalde and the Supreme Court decision, O’Rourke capitalized by hosting rallies where huge crowds swarmed despite the sweltering weather. And shortly after the shooting, O'Rourke confronted Abbott at a news conference that led to an uproarious scene.

O’Rourke is expected to return to the road with regular events through Election Day after appearing at the state Democratic Party convention later this month in Dallas.

“The wind is blowing our way,” said Cynthia Ginyard, the Democratic Party leader in another battleground county, Fort Bend, in suburban Houston. “We have a little less convincing to do. The state of affairs is helping us do that, and I am very glad that Beto is capitalizing on these current situations.”

One measure of the momentum O’Rourke has received lately could come later this month, when the candidates will have to report their fundraising for the first time since February.

O’Rourke successfully met a goal of raising $4 million online in the final week of the fundraising period, which ended Thursday. But Abbott’s campaign spent recent days rolling out plans for nearly $20 million in ad buys, reminding observers of his towering financial advantage over O’Rourke. As of their last fundraising report in mid-February, Abbott had roughly $50 million cash on hand compared to $7 million for O’Rourke.

Public opinion is generally on O’Rourke’s side when it comes to two major issues that have galvanized Texas Democrats more than ever lately: abortion and guns. Polls regularly show that at least pluralities of Texans want stricter gun laws and oppose totally banning abortion.

But the economy and border have ranked as more important issues for voters, and Abbott has the advantage on them. In the Quinnipiac poll, voters chose the border and economy as the two most urgent issues facing the state, and they said they trusted Abbott more than O’Rourke on them by 15- and 14-percentage-point margins, respectively.

Immigration continues to dominate headlines, and it did so tragically this past week after over 50 migrants died in connection with an abandoned tractor-trailer in San Antonio. Abbott quickly blamed the deaths of Biden and later announced new truck checkpoints, while O’Rourke said the United States needs to “dismantle human smuggling rings and replace them with expanded avenues for legal migration.”

Still, in the Quinnipiac poll, gun policy was a close third among the most urgent issues facing Texans, and Abbott’s advantage there over O’Rourke was a much narrower 4 percentage points. On abortion, voters gave O’Rourke a 2-percentage-point edge.

After a primary season during which Abbott lurched to the right, the governor has done little outwardly to try to win back more moderate voters.

He has, however, tread more lightly on the Roe v. Wade news than some fellow Texas Republicans, who have responded with jubilance — like Attorney General Ken Paxton, who declared the historic day an annual office holiday. Abbott, however, was slow to react when the draft opinion was leaked in April, and when the ruling came out earlier this month, he issued a single mild statement that said the court “correctly overturned” the case.

Whatever the impact of the ruling, his supporters believe the economy will reign supreme in November. Cat Parks, the former vice chair of the Texas GOP, said it will “undoubtedly” be the No. 1 issue in the race, not social issues like abortion.

“I think you’re seeing all of the added energy they’re putting behind it because they don’t have anything else,” Parks said. “They have a president who’s incompetent, they have a gubernatorial candidate who’s aligned themselves with Biden.”

Glenn Hammer, the head of the pro-Abbott Texas Association of Business, said the state’s economy is the “healthiest it’s ever been by really any metric.” TAB, he added, “would love to see a continued focus on the meat-and-potato issues that have made Texas the best place in the world to do business.”

Abbott has big ambitions for November. He not only wants to beat O’Rourke but wants to defeat him by a large enough margin to doom any future political run in Texas. Speaking on the sidelines of the Texas GOP convention earlier this month, Abbott rallied supporters with a call to “beat the hell out of Beto.”

Abbott also wants to win the Hispanic vote, though recent polls have shown O’Rourke still leads with those voters. The Quinnipiac survey gave O’Rourke a 9-percentage-point advantage with Hispanic voters.

The fight for Hispanic voters — especially in South Texas — has only intensified in recent weeks after Republican Mayra Flores flipped a congressional seat in the Rio Grande Valley. O’Rourke largely stayed out of that contest, where the main Democratic candidate, Dan Sanchez, held an election-eve rally with three other statewide candidates.

As part of the almost $20 million in ad buys that Abbott’s campaign has announced, $2.75 million has been dedicated to Hispanic media.

The race is shaping up to be different from O’Rourke’s 2018 U.S. Senate race against Sen. Ted Cruz in some key ways. For starters, Abbott’s campaign has proven far more aggressive in working to define O’Rourke than Cruz’s was, pumping out news releases and videos every week loaded with opposition research.

Bonnen said Abbott is “taking nothing for granted” and that the governor’s approach to O’Rourke has been a “night and day” difference with Cruz’s campaign at this point four years ago.

For his part, O’Rourke has openly talked about how he is running this campaign differently from 2018. He has said he is investing more in data; driving a message centered on jobs, schools and health care; sharing more resources with fellow Democratic candidates; and making more of a case against the incumbent.

O’Rourke’s focus on the incumbent this time has especially stood out to his supporters.

“He famously did not draw the contrast with Ted Cruz,” said U.S. Rep. Colin Allred, D-Dallas, who recently endorsed O’Rourke as part of a statewide slate. “You can go back and forth about what you think about that strategy. It’s immaterial at this point, really, but in this campaign, he is clearly drawing the contrast on every issue and also being specific on what he would do.”

Democrats believe O’Rourke’s hammering of Abbott is especially helpful due to the governor’s shift to the right over the past two years — a shift that has only been reinforced by the recent headlines on guns and abortion.

“Whatever version of Greg Abbott you voted for previously,” Allred said, “that’s not the version you’re considering on the ballot this November.”

Disclosure: Texas Association of Business has been a financial supporter of The Texas Tribune, a nonprofit, nonpartisan news organization that is funded in part by donations from members, foundations and corporate sponsors. Financial supporters play no role in the Tribune's journalism. Find a complete list of them here.

This article originally appeared in The Texas Tribune at https://www.texastribune.org/2022/07/05/beto-orourke-greg-abbott-roe-wade-uvalde/. 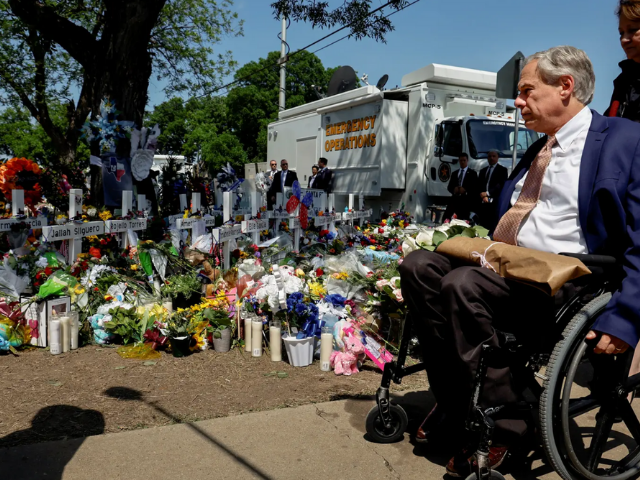