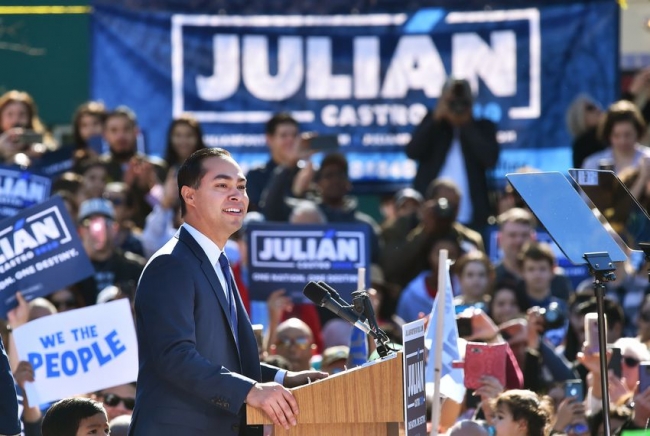 Julián Castro has ended his campaign for the Democratic nomination for president, capping a nearly yearlong bid during which he distinguished himself as a progressive crusader but never found the polling or fundraising support to gain wide appeal.

“I’m so proud of the campaign we’ve run together,” Castro said in an almost four-minute video Thursday morning. “We’ve shaped the conversation on so many important issues in this race, stood up for the most vulnerable people and given a voice to those who are often forgotten. But with only a month until the Iowa caucuses and given the circumstances of this campaign, I’ve determined that it simply isn’t our time.”

The video highlighted some of the causes he championed during his campaign — in some cases, largely on his own — that endeared him to the progressive wing of the party but did not translate into the traction needed to thrust him into the top tier of the sprawling Democratic field.

It’s with profound gratitude to all of our supporters that I suspend my campaign for president today.

I’m so proud of everything we’ve accomplished together. I’m going to keep fighting for an America where everyone counts—I hope you’ll join me in that fight. pic.twitter.com/jXQLJa3AdC

As his campaign reserves dwindled and he missed debates, Castro increasingly cast his campaign as uniquely focused on the most vulnerable. He also spent the final weeks of his campaign arguing that his party needs a more inclusive primary, pushing for a reordering of the nominating calendar, which begins in overwhelmingly white Iowa and New Hampshire.

Castro’s departure means there are no Latino candidates in the race for the Democratic nomination.

After years of being regarded as a rising star in Texas politics, Castro threw his hat into the ring early, months before some of his fiercest competitors launched their respective bids. But he consistently raised millions of dollars less than his rivals and polled in the low single digits, failing to qualify for the two most recent debates despite launching a do-or-die fundraising drive before the first of them. He hit his $800,000 target and stayed in the race but still did not make the cut for that debate.

Castro initially built his campaign around immigration policy. He was the first Democratic candidate to unveil a comprehensive immigration plan, a progressive policy that called for the repeal of a law that criminalized unauthorized border crossings. Axing that part of the federal immigration code later became a popular idea among other Democratic candidates in the race — with Castro publicly pushing rivals to join him in supporting its repeal.

It was not the only time Castro sought to set the pace for the field. After announcing his campaign last January, his first trip was to Puerto Rico, which was still reeling from Hurricane Maria. He toured the network of sewage tunnels underneath the Las Vegas Strip that housed thousands of homeless people. He was also the first candidate to express support for Congress starting an impeachment inquiry into President Donald Trump.

Castro’s exit comes after former U.S. Rep. Beto O’Rourke dropped out of the race in early November. Both Castro and O’Rourke touted potential support in Texas, a state with a large number of delegates in the primary and one that Democrats hope will be competitive in November. But now no Texans will be competing when the state votes on Super Tuesday, March 3.

Although Castro never polled as high as O’Rourke in Texas, he built a large endorsement list in the state that included dozens of state lawmakers, San Antonio officials and some former O’Rourke backers who switched over once O’Rourke ended his campaign.

While Castro’s bid was unsuccessful, Castro raised his national stature by way of his appearances in the nationally televised Democratic presidential debates. Castro’s brightest moment came during the first presidential debate in June, when he viscerally engaged with O’Rourke in Miami.

This article originally appeared in The Texas Tribune at https://www.texastribune.org/2020/01/02/julian-castro-drops-out-presidential-race/.