On December 6, 2011, students and community members gathered at Lanier High School for a tamalada. Together, the community prepared 17,106 tamales weighing in at 2,420 pounds in only 10 hours.

"It's the bringing of people together that makes a tamalada, a tamalada," San Antonio Independent School District 5 Trustee Patti Radle said during an assembly on April 3.

The folks at Guinness World Records in England didn't have any records regarding tamaladas, so they created a new category: Lanier High School succesfully set the new Guiness World Records title for "Most Tamales Made in a 12-hour Period."

Watch the video of the award announcement below. You can also watch our video and see photos from the tamalada here - NOWCastSA helped document the event as part of Lanier's Guiness World Records application.

Lanier students didn't just hold a tamalada to set records - the event was a school-wide learning project too.  According to a SAISD press release:

Other fun fact - The world record for the longest tamale was set by El Chico Cafe in Jackson, Tennessee in 2006. It was 51 feet 9 inches long.

Other San Antonio World Records include: 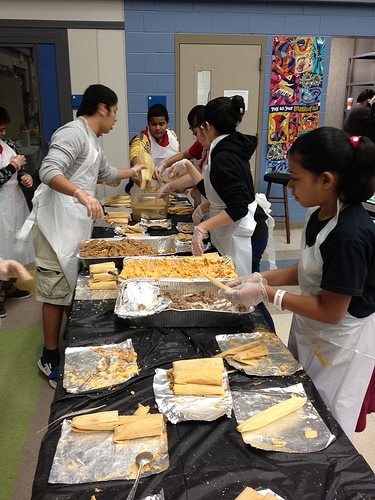