Maria Berriozabal to Our Lady of the Lake University class of 2019: Adelante!

In her keynote address at Our Lady of the Lake University's 2019 Commencement, community leader Maria Berriozabal urged the graduates to appreciate those who came before them as they charge into the future.

Berriozabal, a tireless voice for social justice and advocate for women, was awarded an honorary doctorate by OLLU at the ceremony. (Scroll down to watch video of her speech and read more about her below the video.)

“Your generation that has already begun to make contributions known generosity, your independence, your compassionate entrepreneurship, creativity finding new solutions to old problems. We have also seen the courage of children and teenagers, as they have taken up serious problems of gun violence, climate change and immigrants,” she said.

“We should imagine a group of people always behind us, they are our ancestors, that we bring to our work. They bring us strength as we move together with confidence and trust. They are right behind us, we are never alone,” said Berriozabal.

“If we believe that we are interconnected and that we are dependent on each other for life itself, we will take responsibility for sharing our gifts with others. We will advocate for those who have less than we do, whether its economic needs, education, health, home, country, safety around them, and true equity. If we believe in a true connection between Mother Earth and its people, we will pour our energies into protecting the planet that we all call home.”

“Today graduates, you will take your place in permeating this country and this century with justice. May you find the joy in service, may you be blessed with many good companions, with health for the journey and may you always be showered with love, may your lives be a gift to the world.

From the OLLU news release:

Maria Antonietta Berriozabal has come full circle. Raised in the shadow of Our Lady of the Lake College, listening to the bells of Sacred Heart Conventual Chapel toll, Berriozabal made it her mission, at the age of 14, to help her parents send her siblings to college down the street.

She fulfilled her mission. Berriozabal graduated from Providence High School in 1959, became a secretary, typing 95 words a minute, and doubled the family income. The added salary enabled her parents to send her younger sisters, Rosie and Theresa, to OLLU, where they earned bachelor degrees, and later became school teachers.

Berriozabal, meanwhile, delayed her own education. She worked and took night classes before earning a bachelor’s degree 20 years after finishing high school. For the past 60 years, she has supported OLLU in countless ways -- even while serving as the first Hispanic women elected to the San Antonio City Council.

She helped raise $2.8 million for the restoration of Sacred Heart Chapel; donated papers from her tenure on City Council to OLLU’s Center for Mexican American Studies and Research; gave generously for scholarships; and served as the lead organizer for the “50 Years Later” civil rights conference at OLLU, an event that drew thousands of visitors and attracted national media attention last year.

For her inspiring and unwavering support, OLLU will award Berriozabal an Honorary Doctorate of Humane Letters at spring commencement, which will be held Thursday at 5 p.m. at Freeman Coliseum. Berriozabal will also deliver OLLU’s commencement address to more than 300 graduates.

“Maria has been a dynamic activist and city leader for decades,” said OLLU President Diane Melby, EDd. “She has advocated for the poor and the disenfranchised. It is with great pride and pleasure to award her an honorary doctorate after she has helped so many earn degrees from OLLU.”

Born to immigrants on the edge of the U.S.-Mexico border in 1941, Berriozabal rose from poverty to become a powerful voice and history-making political leader in South Texas. Her vision and compassion were forged in the crucible of hardship. After moving from Laredo to San Antonio at the age of 10 months, Maria’s father, Polo Rodriguez, took a construction job, earning 50 cents for every hole he dug. After finding better paying work, Polo bought the family a house. It had two small rooms, an outside toilet and cost $500.

At the age of 14, Maria learned she had a hole between the chambers of her heart. She asked God to heal her. After numerous tests, her prayer was answered. Doctors said they could find no hole, only a heart murmur, and it soon disappeared. As a result, Maria determined that she would help her parents so her siblings could attend college.

“Maria Berriozabal is an inspiration,” President Melby said. “Her sacrifice and service have improved countless lives in San Antonio, across Texas and far beyond.” 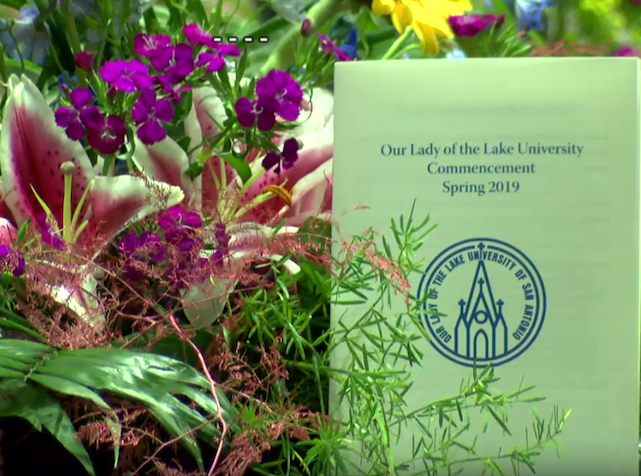