San Antonio’s annual MLK March, originally scheduled for Jan 17, 2022, has been canceled and a virtual event will be held in its place. Tune in to TVSA and the City of San Antonio’s Facebook page at 10 a.m. on January 17, 2022, to see the commemorative 2022 Virtual SA MLK March.

Scroll down for more information. But first some history:

Have you ever wondered why there was no trash pickup on MLK Day?

Dr. Martin Luther King was widely known for his activism and support of workers rights. On the day he was murdered in Memphis, Tennessee, Dr. King was on his way to lend support to the nonviolent strike for sanitation workers. To honor his last mission, San Antonio’s MLK march is always lead by a sanitation truck from the city’s Department of Solid Waste Management, as shown in this 2010 NOWCastSA photo:

Here is the city’s press release:

Due to concerns around the rising numbers of COVID-19 cases within our San Antonio Community and surrounding areas, the City of San Antonio’s in-person March commemorating Dr. Martin Luther King, Jr.’s legacy and service, planned for Monday, January 17, 2022, has been canceled.   San Antonio remains at the “severe” risk level designated by Metro Health earlier this week.

To help preserve the safety of the residents in our San Antonio Community and surrounding areas, and, to aid in the prevention of the additional spread of COVID-19 variants, the SA MLK Commission will provide a virtual March. Last year’s virtual March, "Dream: Rising Up for Justice", directed by Mr. Ya’Ke Smith, Associate Dean and Professor at the University of Texas Austin and independent filmmaker, has been updated to emphasize two significant needs: voting rights and halting the spread of the COVID-19 virus in our communities.

“We would like to thank the MLK Commission for organizing a memorable event that will allow us to reflect and safely honor Dr. Martin Luther King, Jr. The legacy of Dr. King, Jr. draws attention to the continuing challenges and inequities that we face as a nation, including the fight for voting rights. I welcome each one of you to visit the MLK Commission website and participate in this historic event.” said District 2 Councilman Jalen McKee-Rodriguez.

San Antonio residents (and those in surrounding areas) are asked, while remaining safe with their families, to participate in this day of service by tuning in to the following activities:

Show us your creativity by recording how you and your family have commemorated Dr. Martin Luther King, Jr. Day, or engaged in service projects, by taking pictures and uploading them to your social media accounts, using the #MLKDaySA.  The SA MLK Commission will include the images in our post-production updates on the MLK Commission’s Facebook page.

In support of the SA MLK Commission’s goals - providing education and enhancing health, there will be two in-person events held at Pittman-Sullivan Park that will follow all health protocols. The first is a pop-up vaccination and testing clinic, sponsored by the SA MLK Commission, in partnership with Metro Health.  Vaccination and testing are free and available to all.  To get vaccinated or tested, come to the Davis-Scott YMCA, located near the cross-section of South New Braunfels and Iowa Streets, between the hours of 10 a.m. and 3 p.m.

The second event is the Dr. Charles Drew Mobile Blood Drive, sponsored by District 2 Councilman Jalen McKee-Rodriguez, in partnership with the San Antonio Blood Bank and the Psi Alpha Chapter of the Omega Psi Phi Fraternity.  To donate, stop by the San Antonio Blood Bank’s Bloodmobile, at the Pittman Sullivan Park, closest to the cross streets of Iowa and South Palmetto, between the hours of 10 a.m.. and 3 p.m..

Finally, we want to capture the history of our SA MLK March.  We are asking the San Antonio Community to contribute your March-related documents and pictures to the San Antonio African-American Community Archive and Museum archives.  Find out how to upload the information at www.sanantonio.gov/MLK. 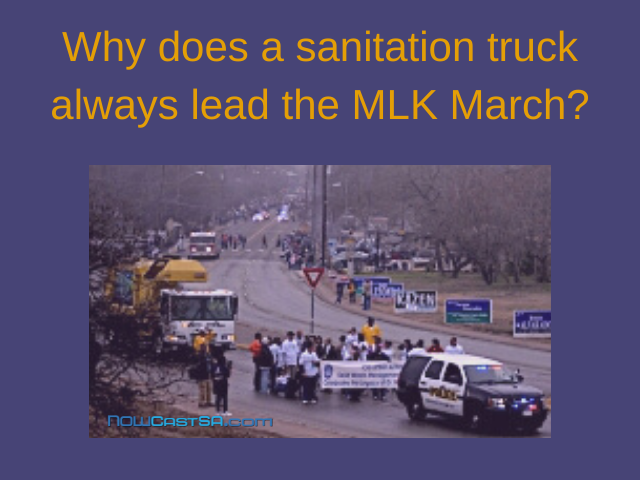