Hours after it was scheduled, San Antonio officials scrapped a vote by the Historic and Design Review Commission on whether to  cut down 100 trees, some very old, in Brackenridge Park.

The move came after District 2 Councilman Jalen McKee-Rodriguez requested a minimum of three public hearings on the project, which is in his district. "We remain committed to the public process and ensure every voice is heard and valued," McKee-Rodriguez said in an earlier statement.

In an email announcement San Antonio City Manager Erik Walsh said he told staff to "pause consideration"  by the HDRC while the design is completed. “No one wants to remove heritage trees, especially from a historic City park, but if the removal ultimately remains necessary to protect the public and historic structures at Brackenridge, I want the community to understand the full context of the project,” Walsh's statement said.

Heritage trees and significant trees located at the top of the San Antonio River bank or along the River Walk are not allowed to be removed without approval from the Historic and Design Review Commission under the San Antonio tree preservation ordinance.

The information packet on the HDRC agenda said the trees were to be cut down in order to restore old stone buildings and walls in the area.

But in a Deceleration News article, Plans to Fell Brackenridge Trees Rooted in City's War on Birds, co-editor Greg Harman posted video of Parks and Recreation Department assistant manager Bill Pennell telling the Planning Commission the trees should be cut down to discourage cattle egrets from nesting there.

On Feb. 16, the HDRC heard almost two hours of public input, with a majority asking the commission to reject the tree-cutting proposal. Many residents said there was not enough community input on the project. To replay the meeting from Feb. 16, click here.

“How many more assaults to our 10,000-year-old culture are we going to have to endure before it is completely erased?" asked Matilda Torres. "The five missions were built along this river for a reason, the river is the anchor to our culture and the trees.”

“The City Council appointed you to represent constituents who elected them, so serve us. Not them (Public Works and Parks and Recreation Departments),” asked a resident who identified herself as Molly.

Gerzson “Ziggy” Nyiri, an ISA Certified Arborist, also spoke against removing the trees. “Removing trees of that size that have expansive root systems that hold onto that much soil… there is no replacement value that will equal what will be lost.”

City staffers pressured the commission for an approval by demanding a decision to be made as soon as possible. Public Works Department Project Manager Jamaal Moreno and Parks and Recreation Department Assistant Manager Bill Pennell explained that they want to avoid the migratory birds’ nesting season because it will prevent them from doing construction and delay the project for about a year.

However, the commission members began questioning what details the project entails after removing the trees. “I have no idea what I’m agreeing to,” said Monica Savino. “I’m lost on what the intent is – what one of the goals is for restoration of the pump house as it relates to Lambert Beach?”

“We don’t have a plan and we would hardly ever approve anything that doesn’t show us what is being proposed,” said Gabriel Velasquez.

“We all want to better the park, but chopping down the trees? We’ve got to be careful,” said Jimmy Cervantes.

HDRC gave the city an option to present more information at a later date, yet the city still pushed for an answer from the commission. Two members of the commission then began to decline the proposal.

After hearing the push back from the HDRC, the city scheduled the now-cancelled special meeting to hear further details on what the city plans to do after removing the trees.

In the email cancelling that meeting, the city said it will work with the Texas Historical Commission and "reengage a committee of Brackenridge Park stakeholders to ensure that historic structures in the park are adequately protected and the removal of heritage trees is minimized."

The email said Parks & Recreation Department is "reconstituting a group of stakeholders that has historically advised the City on Brackenridge Park improvements. The committee will include park tenants, adjacent neighborhood associations, and regulatory agencies to create a forum for guiding park development and information sharing. This committee will convene prior to the City project team returning to HDRC."

The project team will return to the Historic and Design Review Commission later this year for approval of the final design of Lambert Beach (Phase 1) and conceptual design of the Pumphouse and Upper Labor (Phase 2), the city's email said.

In an earlier statement, Councilman McKee-Rodriguez was optimistic about a new solution.  “We are hopeful we can collectively reach a plan which builds upon the natural and historic landscape of Brackenridge Park instead of removing instrumental living elements which make the park so special," he said. "As our climate crisis continues and our bird populations plummet, it is our duty to be co-existing stewards of the land to ensure future generations can enjoy what thousands before have: beautiful, healthy natural spaces, water, shade, and wildlife.”

Click here to listen to what Jamaal Moreno (Public Works Department), Homer Garcia III (SA Parks and Recreation), and Greg Harman had to say about the project on Texas Public Radio’s The Source. 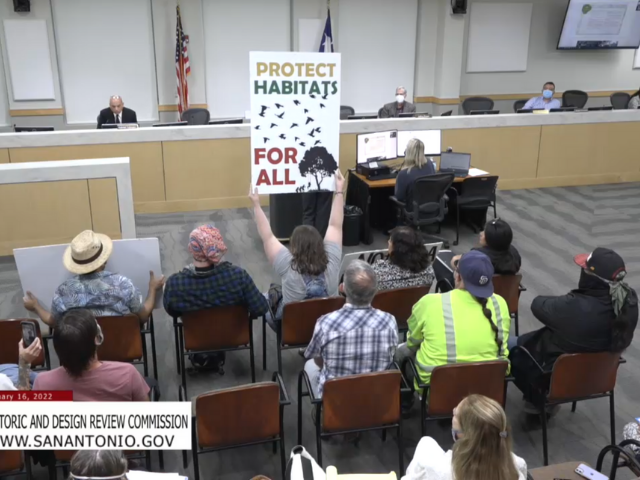