After learning about one of the largest school shootings in U.S history, just 90 miles from his home, Michael Sanchez rushed to Uvalde to create a special mural in honor of the victims.

“I just wanted to give back to the city of Uvalde,” said 41-year-old San Antonio artist, Michael Sanchez.

His artwork is located on 1200 West Main Street, just a block away from a local cemetery where some of the victims are being laid to rest.

Sanchez chose the location after making a Facebook post announcing his idea to donate a mural to the city of Uvalde. He immediately received positive feedback from people offering to help and ultimately chose the location near the cemetery.

“Everyone that was affected in the mass shooting will be able to look and see some type of inspiration, some type of hope, that their child is portrayed as a dove in this mural,” said Sanchez.

His 10-by-30 foot mural does not yet have an official title but he said that if he had to name it he would name it “Into the Sunset.” His piece showcases 22 doves, one for each victim including Joe Garcia, the husband of teacher Irma Garcia, who passed away from grief just days after his wife was killed.

“I just hope and pray that, God willing, their healing process starts,” Sanchez said. He recalls meeting family members of some of the victims and sympathizes with their loss and grief. “I just wanted to show them that there are other people feeling their grief with them,” explained Sanchez.

Some of the community members who helped Sanchez create his piece include Alina DeLeon, Mariah Hinojosa, Yanira Castillo, Angelica DeLeon, and Josiah Villanueva. 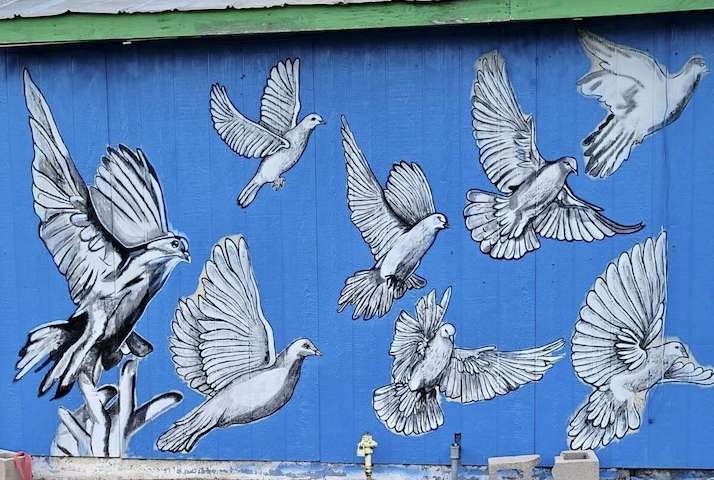