Opinion: To the Police Union - 'Who Do You Protect and Serve?'

Editors Note: This column was originally published in 2016 prior to the city council's vote for the SAPOA contract. The final vote of the City Council approved the contract (9-2) with the two dissenting votes cast by Ron Nirenberg (D8) and Rey Saldaña (D4). NOWCastSA was at the protest and rally that occurred a day before the vote and captured video and photos of the participants. The full photo gallery is here and the video is below.

The negotiation process was a battle local history books may never tell, but one that took more than two years of contentious name calling, finger pointing, and back and forth in mediated negotiations centered around pay and benefits. Yet this compromise falls drastically short of any accountability, and the yes vote on this contract on Thursday would be a costly mistake. Not only will it be fiscally irresponsible to misappropriate the budgeted $443 million for the Police Department, including park police, it will also attribute gross negligence to City leaders – negligence which will result in the promise of continual police violence with impunity.

While the mayor’s call for accountability has fallen upon the deaf ears of SAPOA President Mike Helle, many community members and two of the nine Council members have expressed a need to vote down this contract.

We can and must end police violence in San Antonio. In order to do this we must first acknowledge we have a violent department who has violated its oath to “protect and serve.” According to Mapping Police Violence – a website dedicated to reporting police violence from January 2013-June 2016 – San Antonio Police Department (SAPD) ranks tenth on the list of the nation’s most deadliest police departments. SAPD is in the same category as the Los Angles Police Department (LAPD) and New York City Police Department (NYPD), who lead the nation in use of force cases claiming the lives of black and brown people disproportionately compared to white counterparts.

City leaders, along with SAPOA, have gone to great lengths to disassociate the nation’s problem with calling an end to State sanctioned violence by discrediting the lives of extrajudicial killings such as, but not limited to, Mike Brown, Eric Garner, Tamir Rice, Sandra Bland, Freddie Gray, and most recently Alton Sterling, Philando Castile, and Korryn Gaines. By stating San Antonio does not have the same problems as Ferguson, New York, Los Angles, or Baltimore, City leaders are enabling the same behavior to occur. Leaders are even quick to report that SAPD is a model police force recognized for its efforts in policing. Some leaders even perpetuate the myth of black on black crime as a way to deflect from officer accountability.

However, San Antonio does have the same problems as other cities where black and brown communities systemically suffer more economically, educationally, and judicially. The questions that City leaders, SAPOA, and SAPD need to answer are: “Who do you protect? Who do you serve?”

Since the expiration of the police contract in 2014, SAPD has shot and killed 10 men and two have died after being tasered in police custody, according to the Mapping Police Violence database which collects data from news and police reports. Norman Cooper and Antronie Scott are just two of the twelve that should still be alive today. Marquise Jones was shot before the contract expired along with several other men in separate incidents. These men were human beings before they became hashtags. They were sons, fathers, brothers, husbands, and all residents of San Antonio. All were killed because officers like Robert Encina and John Lee said, “I feared for my life.”

Cooper was tased to death. Two officers used their tasers on him twice because they felt he was resisting his arrest. His family members’ silence does not mean they feel he should not have resisted, but rather that they know we live in a system that praises and justifies police actions.

Mere days before John Lee killed Antronie Scott, Police Chief William McManus said he did not tolerate bad cops, yet in the same breath reminded Mayor Taylor and City Council that Jones’ shooting was justified. I have listened to, prayed, cried, and marched alongside Jones’ mother, father, sister, daughter, family, and friends demanding justice for Marquise Jones. They all said he did not have a gun when he was shot in the back.

Furthermore, when McManus sought to hold Lee accountable for killing Scott earlier this year, the majority of SAPOA membership demanded McManus step down. An overwhelming 97 percent of voting SAPOA members placed “no confidence” in their chief. Caving to political pressure McManus allowed Lee to remain on the force citing a need for better training rather than discipline for mistakenly killing an unarmed black man in the presence of his wife. Contrary to the police report, his mother and family members said Scott did not have a phone in his hands when Lee shot him in the chest.

People lie. People kill. Police lie. Police kill. Police are not above the law, and approving this SAPOA contract allows officers in San Antonio to continue policing the city and its citizens without reproach or scrutiny. Saying “Black Lives Matter” is not “political grandstanding.” Declaring this contract void of accountability and voting it down is not “playing politics.” The systems in place to hold officers accountable, i.e. District Attorney Nico LaHood, failed to arrest, indict, and convict Encina for Jones’ murder. LaHood has yet to arrest, indict, and convict Lee for Scott’s murder. 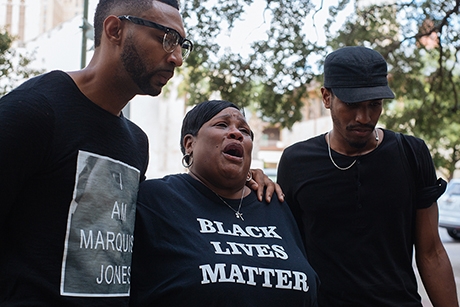