Opinion: Replace Obamacare with this

No one questions the need to improve upon the Affordable Care Act, aka Obamacare. Major changes that could be made include: eliminating the requirement for any employer to provide healthcare for the employees, increasing the range in which subsidies can be provided to at least six times the Federal Poverty Level, and reducing the deductible for the more comprehensive plans to make those plans comparable to the average group plan offered by employers. This would encourage healthy people to purchase plans versus paying the penalty tax, improving the likelihood for participating insurers to be profitable.

Alternatively, we have at this moment in history a chance to adopt a health insurance system that would be vastly superior to the current, or a revised version of the Affordable Care Act. Let’s review what this new system could do from several perspectives.

Individuals and families would not pay premiums. There would be no deductibles or copays. Everyone would be insured. Medicare would cease to exist as all ages would be part of the new system.

Private sector employers would no longer provide group plans for their employees. With this savings, they could increase employee salaries and increase their own profits.

Hospitals and doctors would have very few indigent patients to care for, especially if a comprehensive immigration reform plan were to be adopted, giving almost all undocumented people legal status.

Administration costs would be greatly reduced for all health care providers (doctors, hospitals, clinics, labs) as only one claim form would be used versus different forms for several insurers. Refused claims, requiring additional effort by administrative employees, would also be substantially lower as the profit motive of current insurers is eliminated. Demand for health care providers would increase substantially to accommodate the large number of additional people seeking care.

You may have already guessed who the insurer would be: the federal government. This is socialized health insurance, not socialized medicine. Every other developed country in the world has adopted such a system, although the specifics of the systems vary considerably among countries.

The following was extracted from a Fortune magazine article by Jeffrey Pheffer of October 20, 2014, titled “Why Health Insurance Companies Are Doomed”.

“According to OECD data released in 2014, among 34 advanced industrialized countries, the U.S. spends $7,662 per person (adjusted for purchasing power parity differences), which is more than 2.6 times the OECD average. The U.S. devotes 16.9 percent of its GDP to health care, 1.8 times as much as the average. In the case of health care spending measured any way you want, the U.S. is No. 1 by a large margin. The U.S. also ranks poorly on health outcomes partly because it is the only advanced industrialized economy that has not provided health care to everyone, a situation that persists even after the passage of the Affordable Care Act.”

Gerald Friedman, Professor of Economics at the University of Massachusetts at Amherst, in his article of July 21, 2013, titled “Funding HR76: The Expanded and Improved Medicare for All Act”, enumerated the cost savings and required expenditures of a plan under which the federal government would act as the insurer.

He estimated that the savings resulting from replacing the private insurers with the federal government would be $476 billion per year. This can be readily understood with the knowledge that private insurer overhead for sales, marketing and administration plus profit margin can easily exceed 20 percent versus two percent for the administration of Medicare.

What is the downside of adopting this system? About 500,000 jobs in the health insurance industry would be lost. A substantial percentage of those employees would find comparable jobs in the much larger government insurance organization.

Loss of jobs resulting from finding a better way to achieve a desired result should be an expected outcome. Carriages were replaced by automobiles, land lines are being replaced by cell phones, coal by natural gas, wind and sun, postal workers by email, people by robots.

In his article, Professor Friedman outlines how the new health care system would be financed. Individuals and families would pay from 3 percent to 6 percent of income as an additional tax. This is a very good deal except for people with higher incomes. For this reason, I believe there should be a cap on how much those with higher incomes pay. The cap should be fair so that people at all income levels are receiving a better return from their investment in health insurance versus prior systems.

The funding specifics outlined by Friedman that I don’t agree with are the additional taxation on people with higher incomes. This needs to be replaced by other sources of financing. One source already proposed in Friedman’s article is a modest tax on all stock and bond trades.

The challenges to adopting a new system as described here are to identify how to completely fund providing health care to many millions of additional people without being unfair to those with higher incomes and how to handle the transition from our current system to the new one. Other developed countries have found solutions. We can too. 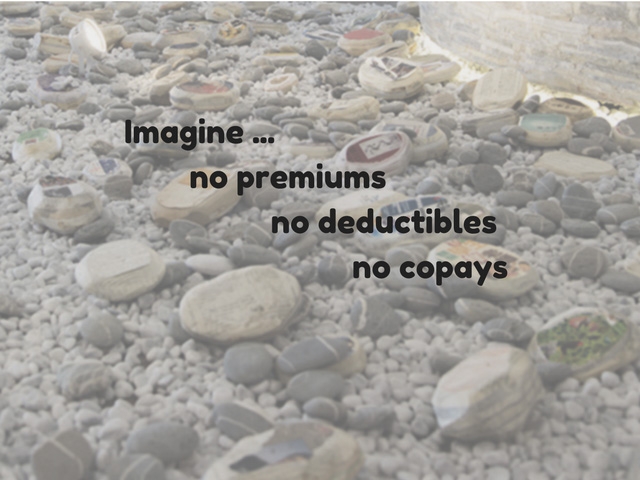