The following story was originally published at Deceleration News by Greg Harman.

Update: The Historic and Design Review Commission has withdrew this item from its agenda before the Feb. 2, 2022 meeting.

Plans to take down more than 100 trees at Brackenridge Park have been cast as being about historic structures in a dangerous state of disrepair. That is just what the variance request from City of San Antonio Public Works Project Manager Jamaal Moreno says it’s about. And concern for these rock structures is largely what the Planning Commission members based their affirming dispensation upon last week (with one dissenting vote).

When Historic and Design Review Commission members are briefed on the matter this Wednesday, they’ll almost certainly be fixed on questions about the state of the river wall or the old pump house. Unless, that is, they caught the performance of Parks and Recreation Department assistant manager Bill Pennell at the Planning Commission meeting last week. In that case, they are almost obligated to ask just how many of the trees slated for destruction have been bundled into this project to help Pennell achieve a very different agenda—the eviction of thousands of migratory birds that Parks employees have been chasing around the city for years with lasers, chemical sprays, flashing lights, and pyrotechnics.

Birds are nowhere mentioned on Public Works’s landscape variance request. Neither are they accounted for in the architectural renderings distinguishing which trees would live and which would die if approved by our Mayor and City Council. But Pennell clearly had the birds top of mind when he made his introductory remarks before the Planning Commission last week in support for eliminating the trees.

“We have worked with numerous agencies—US Fish and Wildlife, Texas Parks and Wildlife, US Department of Agriculture—in coming up with this plan to deal with the birds that are affecting Brackenridge Park,” Pennell said. “The egrets that roost in the park come in, well, some species as early as February and don’t leave til November. We have thousands and thousands of birds that nest and roost above public amenities that we like to use.”

“We like the river, the picnic pads, the Joske Pavillion,” Pennell continued. “The playground had to be shut down. Pathways to the restrooms, you’re not able to get to them without walking through bird feces or other issues that occur with that.”

Pennell went on to describe the Parks Department’s “success” in destroying an established rookery at ‘Bird Island’ at Elmendorf Lake as sitting at the root of this current variance request. (See Deceleration’s extensive coverage here.) But to folks who have watched this entire process for years, what is clear is that the abundance of cattle egrets and other feathered kin at Brackenridge these last two years is almost certainly due to the birds being chased out of Elemendorf, Woodlawn, and even off the San Antonio River at Blue Star by Pennell and company.

This is why the playground was closed. And, as Pennell himself attests, why we are talking about cutting down trees.

In this round of Pennell’s battle with the birds, he has pinned his plan on the 2017-2022 bond and its promised repair of historic structures. This approach, in turn, has allowed folks like Planning Commissioner Mathew David Proffitt to discount public calls in support of the trees, calls made to slow the process, for public engagement.

“[2016-2017] was the time to discuss these concerns,” Proffitt said of before voting to support the variance request in full. “These are public funds. If people didn’t want them spent in this manner, people should have addressed it then.”

The problem is that there was not public referendum in 2017 on any tree-cutting campaign. The bond discussion almost certainly didn’t detail, or probably even mention, any plan for the removal of a large numbers of trees at Brackenridge. The only documentation we found about Brackenridge within the bond states only: “General park improvements and rehabilitation which may include historic river wall, restroom, trails, and historic structures.”

Regrettably, Commissioner Samer Dessouky didn’t break from the pack in approving the request, but he paused thoughtfully to ask an important and unanswered question:

“We’re not in a hurry are we to tear them are we? Because once you cut tem down there’s no return for these trees. So I hope you can agree to have more time and maybe have more public input.”

For Pennell the race is against the pulse of migration and the return of our avian relatives now imprinted on Brack.

His request for more public input last week was answered two days later, when a scheduled briefing on the project was suddenly canceled without explanation on Friday morning. That left Deceleration milling about at Joske Pavilion with a lot of local residents who needed someone to lodge their objections with.

By nature of the process that someone is now the members of Historic Design and Review. Calls placed to them by noon Wednesday are entered into the meeting minutes for consideration, as the HDRC agenda states:

Remote participation through voicemail comments is strongly recommended. Members of the public can provide their comment via voicemail by dialing 210-206-HDRC(4372). Voicemail messages will be played before or during consideration of the item. Please include your full name, home or work address, and the item number and address of the request. Recordings are limited to 2 minutes; voicemails must be received by 12 noon on the day of the hearing in order to be played.

Below is a collection of short interviews with residents after Parks “ghosted” them, as Alesia Garlock, a local birder, photographer, and advocate described the cancellation on Friday.

“I see it as a disturbing trend citywide where decisions like this to take out trees and destroy habitat are being made without community engagement at the initial stages.”

“I’m really upset that they’re trying to cut down these trees. … They’ve been here for hundreds or thousands of years.”

“This river is not just any river, but it’s a river in the sky that our people knew and continue to know as Yanawana.”

“They have filtered carbon, they have given us oxygen, they have been here through storms, they minimize soil erosion … the grandfather trees of the sacred river. This is going to be gone in a blink of an eye if this goes through.”

Eliminating the trees would be “egregious to the people and the ecosystem” that supports migratory birds.

“La gente out there we need your support. We need to make sure when it comes before City Council that you’re out there to protect what we have.”

“We’ve gotten so far away from knowing what our landscape actually means to us, even just basically physically, [but] spiritually, as well.”

“I just hope and pray that the City Council will not listen to the Planning Commission … and will listen to these bird and tree advocates who have the actual truth.” 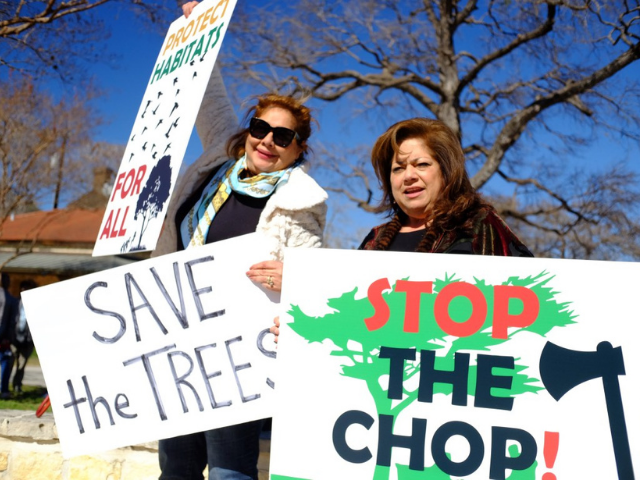