Over the objection of neighbors, the San Antonio Planning Commission recommended amending a future land use plan to accommodate a low-income apartment complex in the Ingram Hills neighborhood.

The vote followed a tense presentation, which included brief shouting between the developer and a handful of Ingram Hills residents.

The proposed 252-unit community, named Majestic Ranch, would be located off Callaghan Road and Majestic Drive.

It is part of the Ingram Hills Neighborhood Plan, which many residents say they have fought to help protect the community’s semi-rural atmosphere.

The commission’s recommendation, which must be considered later by the City Council, changes 13 acres in the land use plan at 4800 block of Callaghan from low density residential estate and community commercial to high density residential.

The project also will go before the city’s zoning commission on Nov. 1.

Hogan said the development, which has already seen some compromises with neighbors’ concerns, is the best use for the long-vacant tract, and would have a positive impact on Ingram Hills.

Many residents say the apartment complex is too high density, would increase traffic, crime, and become a burden to neighborhood schools.

"We’re hoping the City Council is supportive of our position,” Diane Duesterhoeft, a disappointed resident, said following the commission’s vote.

The application for the federal low-income housing tax credits would limit the population of renters to those earning at or below 60 percent of the local median wage. Rent for a three-bedroom in the three-story buildings would be set at about $899 a month.

Hogan said efforts to develop the site have been underway for years. Outside of the neighborhood, the tract is surrounded by automobile-related services, giving the immediate area a more industrial feel.

Hogan added that efforts to develop land along Callaghan are hampered by the presence of utility towers and easements roadside. Majestic Ranch would be accessible from Majestic Drive/Horseshoe Bend and Woodside Drive, two roads that diverge from Callaghan.

Hogan said the development company, HomeSpring Realty Partners, would maintain a drainway that runs through the property.

The proposal includes a buffer between Majestic Drive, a residential street, and the apartments and parking lots.

Proposed amenities include a clubhouse, gated entry, pool, playground and business centers. Hogan said he looks forward to being a high-quality product, and does not foresee a rise in crime as many residents fear.

"Over the years I’ve owned the lot, we’ve looked at every option,” said current property owner George Block. He said the Majestic Ranch proposal is the best use of the tract.

Block said he understands neighbors’ concerns especially about the proposed increase in multi-family units in Ingram Hills. But Hogan said after initial talks with the Ingram Hills Neighborhood Association and some compromises, both sides stopped talking..

Many Ingram Hills residents have resorted to the online site NextDoor, closed to non-residents, to discussing and criticizing the project.

Unable to directly reply to such criticisms, Hogan set up a Facebook page to promote Majestic Ranch and try to allay concerns.

Several residents took to the podium at Wednesday’s commission meeting, saying they are still worried the apartments will lead to traffic, school and safety problems. They are also concerned Majestic Ranch will turn Ingram Hills into a mostly renter neighborhood. Neighbors say they are not against more multi-family units in the neighborhood, but rather the proposed density in the current project concept.

They said they resent the idea of seeing their neighborhood plans suddenly being changed to accommodate what they see as an unpopular plan. Homeowner Garth Dennis said the high-density development does not complement the neighborhood’s character.

“The project isn’t about helping the community,” said resident Richard Menchaca. “The project, to me unfortunately, is a money grab for federal housing tax credits.”

Duesterhoeft told the commission that the developers’ proposal does not comply with the Ingram Hills neighborhood plan because it does not promote development of single-family homes. Also, community commercial zoning along Callaghan is already consistent with the plan, she added.

Duesterhoeft said she and neighbors were shocked that city staff recommended approving the land use amendment. She, too, is worried that the proposed development “is more than double our current largest complex and is way out of scale to the neighborhood.”

“Given our neighborhood plan, we think the current zoning for this land is appropriate and we don’t want to see the zoning changed,” she added.

Cynthia Spielman, president of the Beacon Hill Area Neighborhood Association, told the committee that bolstering affordable housing in San Antonio is an admirable goal. However, she added, the city already has difficulty providing quality basic infrastructure services to newly developing areas, so simply building the project does not solve all problems.

“This is about respecting neighborhood plans, and increasing affordable housing in a holistic way," she said.

Richard Brogan said the density of apartments could raise the potential of neighborhood criminal activity by a significant margin. But a couple of neighborhood area residents said Majestic Ranch would be a positive addition.

Meagan Garcia said the apartments would be a welcome change from the automobile-related businesses and junk car lots that lie nearby. Garcia then wept in response to Ingram Hills residents' negative portrayals of renters. Garcia and her young family are renters who hope to become homeowners soon.

"It’s sad to hear them speak like (renters) are animals,” Garcia said. "Everyone deserves a roof over their heads.”

Commissioners Michael Garcia Jr. and Mary Rogers said the project did not fit into the neighborhood’s long-range plan.

"It’s a beautiful project, but it can be done elsewhere,” Rogers said, adding that the long-established neighborhood plan first should be upheld.

Commissioner Bradley Carson said he could see both sides’ arguments. Commissioner Andrea Rodriguez said, as a renter, she hopes Ingram Hills homeowners do not see renters in a negative light. One resident in the audience kept repeating: “It’s not quality, it’s the quantity.”

Commission Chairman Marcello Martinez said, given the city’s growth patterns, there are plenty of single-family home developments and not enough multi-family communities.

He added that, in his view, Majestic Ranch looked like a good fit near the existing Ingram Hills homes.

Then things got testy. Hogan defended his project, and showed disappointment that the neighborhood association is no longer speaking formally with him about Majestic Ranch.

Residents in the audience yelled at Hogan, with one calling him a liar about his proposal. Hogan turned around and exchanged a few words with residents, as city staff encouraged everyone to calm down.

Bradley Carson encouraged all those involved in the matter to act civil toward each other.

"Regardless of what we decide, nobody will be happy,” he added.

Carson said he agreed the project goes along with the greater goal of increasing affordable housing in San Antonio. He then motioned to amend the land use plan, with a slight commission majority backing him by vote.

In addition to being concerned with the project, some Ingram Hills residents have told the San Antonio Express-News that they do not feel confident their City Council representative, Cris Medina of District 7, shares their concerns because Hogan was a contributor to his election campaign in 2015. In a recent Express-News article, Medina said that an early look at the project looked good to him.

If the council approves Majestic Ranch, the lot is would be sold to a partnership that includes the San Antonio Housing Trust Public Facility Corp.

Hogan’s partners then would build the apartments, and enter a pact to manage it. If the San Antonio Housing Trust were to become co-owner of the community, Majestic Ranch would be eligible for a property tax exemption. 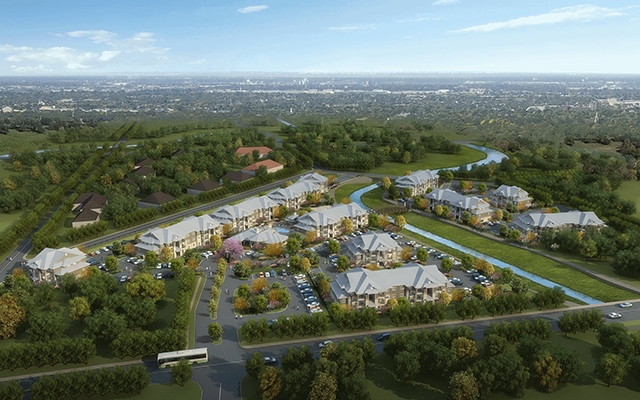