After 13 meetings in seven months, San Antonio’s Noise Ordinance Task Force is still wrangling over how to accurately collect noise readings from loud bars and clubs and how to improve enforcement and modify the city’s current noise regulations.

In its first meeting of the new year, the Noise Ordinance Task Force heard data from a pilot program that unleashed code compliance officers on noisy bars, nightclubs and restaurants.

The task force met 12 times in 2021 to hear community input and review the noise level rules for businesses, the enforcement methods, and the sound measurement protocols detailed in the current ordinance. The next task force meeting is scheduled for Feb. 1, 2022.

The task force meetings are open to the public, but the city did not record any of the meetings for public review. At the request of concerned residents, NOWCastSA recorded the Dec. 14, 2021 meeting. Scroll down to replay that video. The Jan. 11 meeting was virtual, but the city chose not to record the video and make replay available to the public. Meeting minutes from the January 11 meeting are available to view at this link.

At the December meeting, residents and business owners clashed over how the city’s noise ordinance code should be modified or enforced.

From January 2020 to June 2021, the San Antonio Police Department received more than 53,000 noise ordinance calls, of which 70 were issued citations, according to the noise ordinance task force meeting minutes from August 17, 2021. The majority of the calls are complaints about noise from house parties, apartment complexes, and some from restaurants, clubs, and bars. When nearby residents call the San Antonio Police Department with a complaint about loud noise coming from bars, clubs and restaurants, the calls have historically been given such a low priority that the noise is often gone by the time an officer arrives to investigate.

At the request of San Antonio City Manager Erik Walsh, the task force implemented the pilot program from October 7, 2021 to January 9, 2022. The program was designed to help resolve noise complaints by giving code enforcement officers the authority to quickly investigate noise complaints, take sound readings, and report violations to police for follow-up action.

The task force originally was required to submit its recommendations to the city council by October 2021, and it is now uncertain when the recommendations will be submitted.

The current noise ordinance code sets a limit of 70 decibels during the day and 63 decibels at night for businesses. Nighttime hours are 10 p.m. to 6 a.m. Sunday through Thursday and 11 p.m. to 6 a.m. Friday through Saturday. Businesses along the Riverwalk have a noise level limit of 70 decibels 24 hours a day, seven days a week. Entertainment-zoned properties such as Morgan's Wonderland, Fiesta Texas and Sea World, have a noise level limit of 85 decibels.

Data gathered for the pilot program covers all 10 city districts and includes the number of calls received, cases found to be in violation, number of citations issued, and noting the property type as business or residential. According to the meeting minutes from the Jan. 11 meeting, pilot program data showed 4,708 non-emergency calls were made about noise from Oct. 7, 2021 to Jan. 9, 2022. Of those, 1,712 calls were investigated by code enforcement. Out of the 1,712 calls investigated by code enforcement, 214 locations were found to be in violation of the noise ordinance and 115 were issued citations by San Antonio Police. According to the meeting minutes from Jan. 11, frequent noise violations are caused by residents and business owners who are unaware that they have violated the noise ordinance policy. Upon the discretion of SAPD, a warning will be given with a request to lower the volume. Don Pavlin, a non-task force member, had said during the meeting he calls the police frequently and observes that as soon as police depart from the location of a noise ordinance violation, the noise level resumes to its original level. Also discussed during the meeting was the need for the generation of a heat map of calls made to SAPD and code enforcement as well as the locations of noise violations to help identify repeat offenders from the pilot program data.

More information on details regarding the noise ordinance task force, archived meeting minutes and agendas, can be found at this link.

Watch the Dec. 14 meeting here or scroll down to read comments from the meeting.

Here are highlights from the comments at the Dec. 14 noise ordinance meeting:

R.B. Blackstone, a recording engineer, producer, musician, and sound designer, said business owners should caulk any holes and properly ensure everything is sealed to keep sound from getting out of their buildings. Blackstone also discussed the exact relationship of the decrease in sound with increasing distance. Blackstone commented, “Every time you double the distance from the source you are at, the sound goes down about 60 feet. So when I see the noise ordinance say we measured at 80 feet, 100 feet, and now we are going to measure it at 150 feet, (from the noise source) you aren’t really doing much of anything. Where you measure sound from is very important.”

Don Pitts, a music program manager for the city of Austin,  said Austin issues “sound permits” and uses strategic problem-solving to resolve sound complaints. Pitts stated, “Once we figured out where the source of the sound was, it was really an easy fix of decoupling the sound speakers from the wall and setting it on rubberized stuff. The policy that we installed was the sound effect plan so everyone would need to have a permit,” he said.

John Brenneman, a member of the Oak Park Neighborhood Association and task force member, said, “The main problem we have in our area is really the bass and the vibration.” Brenneman also stated that the vibrations he hears last for six hours from 10 p.m. to 2 a.m. four times a week, every week of the year.

Dawn Larios, a task force member and representative of the restaurant association, suggested that the city “hire these consultants to come in and do a ride-along or consult with these businesses and help them to figure out how they can improve. Whether it’s their speakers or sound system, their wiring, whatever it is, and let’s solve the problem that way.”

Sergio Acosta, owner of the Social Spot bar at 930 Broadway, agreed with Larios and said multiple businesses, as well as the highway, add to the noise level surrounding his business. As a result, Acosta’s business has been cited multiple times. Acosta stated that he wouldn’t mind having sound experts like Pitts or Blackstone come into his business to diagnose and assist in helping him fix the issue. “They could come in here and say you know what, it’s not 100% you, it is 25% them or whatever, just trying to help identify it,” he said.

Chad Carey owns The Empty Stomach Group, which owns seven establishments in San Antonio:  Barbaro, 2720 McCullough Ave.; Hot Joy, 1014 S. Alamo St.; Midnight Swim, 2403 N. St. Mary’s St.;  Little Death Wine, 2327 N. St. Mary’s St. and  Rumble and  Paper Tiger, both located at 2410 N. St. Mary’s St. Carey also owns the bakery, Extra Fine, at 138 E. Mistletoe Ave. Carey said he would rather find a solution that works for business owners and residents. “I guess part of my concern as a business owner is, are we trying to address residential concerns on an ad hoc basis or are we fighting 50 different battles with 50 different people in the neighborhood with 50 different houses and 50 different perceptions of what’s loud and what’s not?” He continued, “I think you are going to find a lot of resistance from the business owners when you are saying we are breaking the law. We don’t believe we are when we have been cited for a violation.”

Parker Dixon, a task force member representing the Tobin Hill Community Association,  said: “I think with remediation, the city needs to bear the burden of remediation, not the business owners because the city has created the problem by approving the (uses) of the properties adjacent to residential homes that have been there for 100 years. The city should also bear some financial responsibility for the remediation of improving the sound of those homes. Some of these people have been in these homes for years and years before those businesses were there. The city approves these businesses to operate with amplified music and it changes the quality of life for the people in those homes. I think it’s a burden on the city to help the businesses improve remediation and it is not just all on the businesses.”

Thomas Potter, business owner of Rebar, 8134 Broadway, said he has been issued several noise violations. Potter said he does not understand why code compliance officers took a reading at a point where the noise coming from Rebar is also blended with ambient noise from Broadway and the sound coming from the business near his.  “Code compliance came out and stood out 20 feet away from my business and took the reading right there on the edge of Broadway,” Potter said. “We already know the ambient sound on Broadway is between 65-70 decibels. It is already over the limit. Not to mention, one of the businesses is a big problem right across from us. 150 feet away, across the street in the back of my business on my patio, we hear their music over our music.” Potter said he would like to have the chance to inform officers they are near too much ambient noise or inform them the sound is coming from nearby business owners before they issue him a citation.

Marcus Serna, owner of the Beer Depot at 1304 S Laredo St., said code compliance officers took readings at his property fence and gave him two citations on two separate occasions at the end of his property fence, 17 feet away from the source of his music. He said his business is right next to the highway, which most likely affected the sound reading. Serna also said that if the reading was taken at the residence of the person who complained, and he was found to be in violation, he would be open to adjusting the sound.

Alberto Saenz, a resident who formerly lived downtown, said he moved away after he couldn’t sleep at night because of loud music from a business half a mile away. He said he asked the business to turn down the music to a level that wasn’t so loud, but the business owner only adjusted the volume slightly. He said he also called the police multiple times a week and was  told they couldn’t do anything to help him. Saenz said, “I feel your pain, it’s horrible, but guess what? I no longer live at the place that I bought because of some dude that has a kegger half a mile away on the other side of the highway.”

Another resident recounted her experience with a noisy downtown business. “We had detectives come out and take measurements from our balcony and the top of the building and it was at 70 decibels and this wasn’t early, it was at midnight. I know that he is not representative of every business but it was definitely enough to get us to move, which was very unfortunate.”

Greg Dobie, who lives on North Alamo Street, said when he lived in California, bars were more cooperative to neighborhood complaints. “When you threaten to take away the liquor license, that’s when you finally get some change,” Dobie said. “So I want to mention that as something for the task force to consider.”

Brian Clancy said he finally achieved the dream of living downtown, but now is considering leaving because of the noise vibrations coming from downtown businesses. “One thing that has to stop is the infrasound and the constant vibrations,” Clancy said.

The task force is composed of 15 members representing residents from the affected neighborhoods, the food and beverage industries, and the neighborhood, business and restaurant associations. The task force also includes representatives from districts 1, 2,3, 9, & 10 through the Culture and Neighborhood Services Committee as well as representatives from SAPD, code enforcement (Development Services), and the City Attorney’s Office. 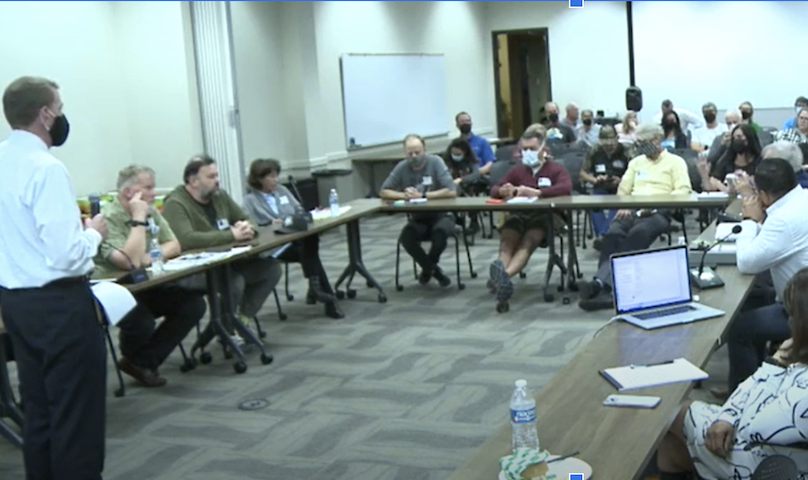