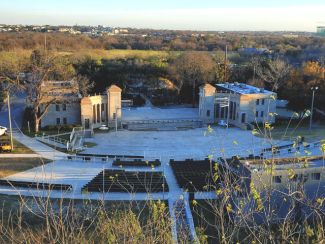 At the meeting, recorded for replay by NOWCastSA, the Brackenridge Park Conservancy shared its concept plans to build a large-scale theater that would seat 7,000 people - compared to 879 seats today - for between 48 and 60 concerts a year.

The Conservancy named entertainers such as The Weeknd and Billie Eilish to highlight the wide range of artists that could be performing there in the future. Billie Eilish’s most recent tour consists of venues like the State Farm Arena in Atlanta, the United Center in Chicago, and Madison Square Garden in NY, all which seat more than 15,000 people - more than twice the amount of seats proposed for the Sunken Garden Theater.

According to the San Antonio Parks and Recreation website, the Sunken Garden Theater was completed in 1937 as part of the Texas Centennial celebration. It has hosted everything from Shakespeare to music and cultural festivals. Read more history here: Shifting Spaces: The Sunken Gardens of San Antonio, Texas.

When word of the proposed expansion leaked, residents were harshly critical of the potential impact on nearby neighborhoods and the lack of public engagement so far. In an opinion piece published on NOWCastSA, River Road Neighborhood Association decried what it called a  “secretive proposal to use city bond funds to demolish San Antonio’s historic Sunken Garden Theater and convert it into an event space that will overwhelm the infrastructure of the entire area.” https://nowcastsa.com/news/opinion-sunken-garden-theater-not-sale

During the Town Hall, Councilmen Bravo and McKee-Rodriguez emphasized that the meeting was created to give the public an opportunity to express their concerns and to voice their opinions on the proposal.

More than 170 people attended the meeting on WebEx. About 18 people spoke about the project, and many more sent in their questions in the chat. Critics raised concerns about everything from the wildlife at the zoo to traffic and noise problems.

Watch a recording of the full meeting: