The San Antonio Zoning Commission denied a zoning request from industrial to multifamily on a 400-unit market rate apartment project planned for Southtown.

The 4:3 vote against the project on May 15, 2018 came as a surprise, considering the Planning Department staff recommended the project and it had the support of the Lone Star Neighborhood Association. Staff noted that the rezoning would remove a metal recycling yard that is near single family and multifamily residences.

The 4.2-acre project site is located south of the Blue Star Arts Complex and northeast of the intersection of Probandt Street and Lone Star Boulevard. Federal International operates a recycling center there for paper, plastics and metals.

“The area is undergoing a transition from industrial uses to multifamily/mixed use developments. The requested rezoning is in agreement with the current future land use designation of High-Density Mixed Use,” the staff report stated.

However, the commission chair, Francine Romero, spoke against the project following a presentation by Ashley Farrimond, the Kaufman Killen attorney acting as agent for the developer.

“I know this isn’t going to be popular, but I can’t support this,” Romero said.

Romero explained that she has been talking to Southtown residents who are concerned about the density that is going on, “without discussion, without regard to how it’s impacting basic quality of life. I’m not going to 400 units without knowing more about it, without more discussion about it.”

Commissioners Oscar Rosalez, Robert Wayne Sipes, and Patricia Gibbons voted with Romero to deny the zoning request. The case must return to the Zoning Commission on June 5.

The Oden Hughes apartment project (red) is surrounded by other high-density residential projects (yellow) that preceded it or are in development. Graphic by Adolfo Pesquera.

Even though the city land use plan for the area encourages high-density development, Romero took the position that there has already been a lot of high-density development along the Probandt Street corridor. In recent years, apartment construction in the vicinity has included Southtown Flats, Cevallos Lofts, and The Flats at Big Tex. There are also plans to redevelop the Lone Star Brewery complex, which has been vacant for years.

Romero asked Farrimond how many units were planned at 400 Probandt, the proposed project site. Farrimond said the maximum number of units allowed was 400 and the developer, Oden Hughes, was planning a number that was just under 400.

The Lone Star Neighborhood Association had discussed the project with Oden Hughes representatives and they raised a concern about on-street parking. Farrimond said there would be no on-street parking because the complex will have a parking structure for tenants and guests. She presented a conceptual site plan that showed how apartment units would wrap around the garage on all sides, hiding it from public view.

The neighborhood association also raised a concern about whether the apartment complex would have green space. Farrimond pointed to two courtyards, each with a pool, and some green space landscaping around the perimeter.

Farrimond could not be specific about a height, stating only that they are looking at a four to five-story structure. She added that the design is subject to review by the Historic and Design Review Commission, and Oden Hughes representatives have had preliminary talks with the HDRC’s Design Review Committee.

The conceptual site plan for the Oden Hughes multifamily project at 400 Probandt. Courtesy of Oden Hughes.

Commissioner Sofia Lopez asked if there would be an affordable housing component, but Farrimond said the entire project was planned as a market rate rental development. Lopez suggested Oden Hughes reconsider that, possibly by approaching the San Antonio Housing Trust for a grant that would permit some rental subsidy.

Oden Hughes is based in Austin and is primarily active in the Austin and Houston markets. Until recently, the company has shown little interest in San Antonio. The company is nearing completion on Amara Apartments, a 23-acre luxury community near The Rim, and has a mixed-use residential/retail project in the works in Bulverde.

This article was originally published in the Virtual Builders Exchange here: https://www.virtualbx.com/construction-preview/san-antonio-zoning-commission-stalls-400-unit-apartment-project-in-southtown/ 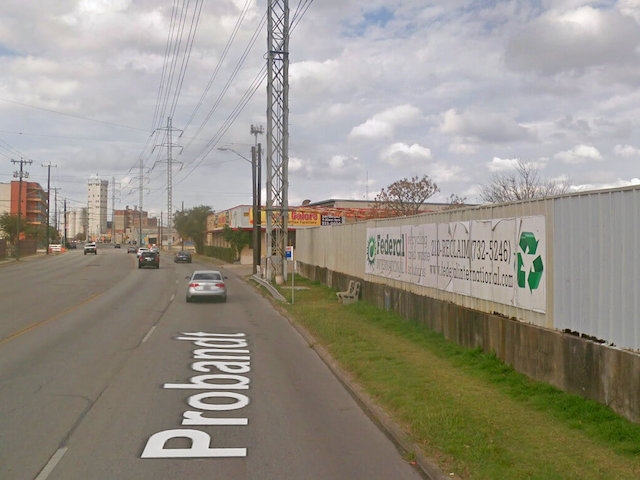