With help from both members from Texas, the Senate voted Saturday to block the DREAM Act, which would provide a route to citizenship for undocumented immigrants who were brought to this country as children.

Only 55 of the needed 60 Senators voted to stop debate on the bill and bring it to the floor for a vote. Texas' Sens. Kay Bailey Hutchison and John Cornyn were among the 41 who voted against moving forward with the DREAM Act.

In a statement released on the White House Blog, President Barack Obama called the Senate action "an incredibly disappointing vote." Obama said his administration "will not give up," on the measure or on comprehensive immigration reform.

DREAM is the acronym for the Development, Relief and Education of Alien Minors Act that would provide a path to citizenship for undocumented immigrants who came to the United States before the age of 16 and who go college or serve in the U.S. military for at least two years.

Several students at the University of Texas at San Antonio began a hunger strike on Nov. 10 to bring attention to the DREAM Act. (See the NOWCastSA story and mini documentary on them here.)

Some of the hunger strikers and Berriozabal were among the 16 people arrested on Nov. 29 after staging a peaceful protest and sit-in at Hutchison's legislative office in San Antonio. (See the NOWCastSA story and slideshow on that event here.)

For more reaction to the DREAM Act vote, go to the Texas on the Potomac blog here. 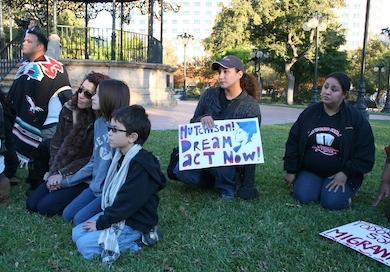