What Did Students Think of Beto O’Rourke’s College Tour? Read Their Articles

Democratic gubernatorial candidate Beto O'Rourke held over 15 student events at college campuses across Texas. According to O’Rourke’s campaign page, each college tour was an opportunity to get registered, get organized, and commit to the work ahead. Various student publications covered their designated college tour stop with stories of their own. Read about Beto O’Rourke’s college tour through the eyes of future journalists:

"Gubernatorial candidate Beto O’Rourke wore a burnt orange hat as he hosted a rally in front of Lyndon B. Johnson Presidential Library on Monday to address students on the first stop of his College Tour across Texas.

Hundreds of students crowded around O’Rourke as he spoke on the political power of young people, the legality of abortion and voter suppression.

“The women of Texas won women’s rights 50 years ago, (and) it’d be the women of Texas to bring them back in 2022,” O’Rourke said. “It’s a reminder that the challenges that we face today are so extraordinary, and we may be tempted to think unprecedented. We can overcome them.“

"On Sept. 26, gubernatorial candidate Beto O’Rourke made a stop at UTSA’s Main Campus in the HEB Student Union for the first day of his statewide college tour. UTSA was O’Rourke’s second stop on the tour immediately following a stop at the University of Texas Austin. Within the next week, O’Rourke will be making stops at 15 college campuses across the state, including schools such as Baylor University and the University of North Texas. The main focus of O’Rourke’s tour is to inspire young voters and to inform students on pressing issues such as gun control, reproductive freedom, education and civil rights.

O’Rourke opened his speech commenting on his prior visits to UTSA during his senatorial campaign in 2018 and the resulting voter turnout of those midterm elections.

“Four years ago in 2018, we visited … college campuses all over that state of Texas. And the biggest turnout no matter where we went was right here at UTSA,” O’Rourke said. “You all led the way in 2018 [for] the largest voter turnout that we’ve seen in the state of Texas since 1970. Young voters in that year … turned out at a rate of 500% over where they turned out the last midterm.”

University of Houston- The Daily Cougar

“Students from UH and Texas Southern University were in attendance, along with Texas’ 18th district representative Sheila Jackson Lee, who gave a short speech before O’Rourke took the stage.

“When they (media) report the day after November in 2022 and they report that Texas has gone places where they never thought it would go, they will report that it started right here in the University of Houston and Texas Southern University,” Lee said.

"As his supporters cheered, O’Rourke spoke about his hope of canceling the STAAR test and teaching the full history instead of having parents and children be scared of critical race theory.

"In part of his goal to legalize marijuana, O’Rourke also said he want to expunge arrest records of those convicted of possession of the substance.”

“With an introduction from his campaign’s student fellows, O’Rourke spoke at Rudder Theatre on Wednesday, Sept. 28 at 10:30 a.m. O’Rourke primarily touched on his goals for his potential time in office as governor and his aspirations for the future of Texas, including abortion access, gun control, payment for educators, the Texas power grid, Medicaid expansion, veteran care and treatment and marijuana legalization.

“Future generations are going to be looking back on those of us here alive today, the people of 2022, to see how we acquitted ourselves at this moment,” O’Rourke said during his introduction. “Everything that we care about is on the line and will be decided in a matter of about 40 days on the eighth of November.”

O’Rourke spoke to a packed crowd of about 300 — mixed with supporters and protestors — at Freight Icehouse and Yardbar as a part of his College Tour campaign. It was one of three campaign stops for the day. Prior to arriving in Waco, O’Rourke spoke to Texas A&M students in College Station, and after speaking in Waco, he headed up I-35 to speak to students at UT Arlington.

“Donning a UTA cap, Texas gubernatorial candidate Beto O’Rourke addressed some of the most contentious political issues Wednesday to a crowd of attendees sprawled across Brazos Park.

O’Rourke, who will be facing incumbent Gov. Greg Abbott in the 2022 midterm, won over 90% of the Democratic primary votes in March. In his third and final college tour of the day, where he was greeted with cheers and “Beto for Texas” posters, he spoke about abortion rights, gun laws, immigration and other issues.

“Because of the young people here at UTA, we are going to win this election on the night of Nov. 8,” he said in his speech.”

“On his eighth stop in his two-week college tour, democratic gubernatorial candidate Robert “Beto” O’Rourke visited the university for a sold-out rally.

The Gateway Center Ballroom flooded with students Monday morning — some of whom had been waiting over an hour to secure front row seats. This was O’Rourke’s second visit to Denton in less than a month, and he was met with cheers as he trotted through the rows of seats sporting a University of North Texas cap.

“We are all lucky to be here — bright and early on a Monday morning, 36 days from when this contest is going to be decided,” O’Rourke said. “It is arguably the most important election in the United States of America today and maybe in Texas history — given the stakes that are on the line right now.”

“Governor candidate Beto O’Rourke, former representative for Texas’ 16th Congressional District, came to SFA to share his political beliefs and encourage people to vote for him in his run against Governor Greg Abbott on Oct. 4.

Beto discussed the changes he would make if he won the election, like giving women the right over their own bodies, canceling the state-mandatedSTAAR test, giving resources to returning soldiers who struggle with PTSD, legalizing marijuana,expunging any previous arrest records that pertain to marijuana, eliminate voter oppression by making Election Day a celebrated state holiday and prioritizing Texas children over the NRA.”

The rally took place in Evans Auditorium as a part of O'Rourke's college tour across Texas. The Texas State crowd included a full auditorium plus a line that extended from the doors of Evans Liberal Arts to the Alkek Library stairs.

Wearing a maroon Texas State hat, O'Rourke began his address by calling out Gov. Greg Abbott’s actions regarding gun control following the mass shooting that occurred in Uvalde, Texas, in May.

“Our governor, the most powerful man in the state, has yet to lift a finger to make it any less likely that any other child, in any other community or any other classroom will meet the same fate as those children in Uvalde,” O’Rourke said.”

“On Thursday, gubernatorial candidate Beto O’Rourke hosted a rally near Rice’s campus as part of his campaign’s tour of colleges and universities across Texas. The rally, which was held at Fleming Park, a few blocks north of campus, was attended by hundreds of Rice students, some neighborhood adults and a few dogs.

During his speech, O’Rourke said that, if elected, he would focus on increasing abortion access and restrictions on buying military-style firearms. He also discussed his desire to reform Texas’ electricity grid and increase access to physical and mental health care services, among other policy priorities.

In an interview with the Thresher, O’Rourke spoke to the fears of young women who are thinking about leaving Texas in response to Texas’ current abortion ban.

“I’ve got [their] back, and I hear [them] loud and clear,” O’Rourke said. “All of us have to do everything we can do to win, or else that will be our future. At least for the next four years.”

“Texas Democratic governor candidate Beto O’Rourke made a campaign stop at Sam Houston State University as a part of his Texas College Tour on Oct. 7, 2022.

On his Texas College Tour, he visits different Texas universities to outline his unifying vision of his beliefs.

This event was held in the Lowman Student Center on campus with over 1,500 students in attendance.

It was made aware only 72 hours in advance.”

“Democratic gubernatorial candidate Beto O’Rourke detailed his plans for potential governorship at a packed rally of over a thousand students last Friday.

The “League of United Latin American Citizens” and “Students for Beto” hosted O’Rourke in the David Gundy Alumni Center, where he discussed hot button topics such as economics, healthcare and abortion rights. This was O’Rourke’s second visit to UTD, as he spoke to comets in the SSA Auditorium during his run for senator against Ted Cruz in 2018. In November, UTD will be one of nearly twenty universities on O’Rourke’s Beto for Texas College Tour.

In painting his vision for Texas, O’Rourke highlighted his desire to legalize marijuana and end the STARR test as the crowd thrust their campaign signs into the air. Later in the speech, O’Rourke got into more polarizing subjects like condemning Abbott’s trigger laws that make abortion a felony, per the recent Dobbs v. Jackson decision.

“Don’t ever allow him to persuade you that this is about life or about heartbeats or about the life of the mother,” O’Rourke said. “This is about power and control, especially over women.”

“Greeted by cheers from students and supporters alike, Democratic gubernatorial candidate, Beto O’Rourke, made an appearance at the Frazier Alumni Pavilion sporting a red Double-T cap, high-fiving the hands of the supporters he passed. Texas Tech served as one of the last stops in O’Rourke’s college campaign tour.

O’Rourke touched base on campaign promises he previously expressed while on other stops of his college tour, including policies about reproductive rights, gun control, preparing Texas for winter storms, immigration and the legalization of cannabis.”

“Beto O’Rourke, who is currently on the road trying to gain traction for the Texas gubernatorial election, made the final stop of his college tour Tuesday, Oct. 11 at the El Paso Natural Gas Conference Center at UTEP. Filled with students and community members, O’Rourke shared his ideals for what he hopes to do if given the opportunity to become the next Governor.

"When talking to students in attendance, they hoped Beto would touch on topics important to them including immigration, abortion and college education. It has been 27 years since the state of Texas voted for a Democratic governor and some do not know if what Beto has said and done is enough to see a change.

“I don’t know, I’m not sure (if Beto could say anything to help him win),” said attendee Ericka Torres. “I just hope one day I get to live and see Texas turn blue.”

If you know of one, send us an email with a link to news@nowcastsa.org with the subject line “Beto College Tour” 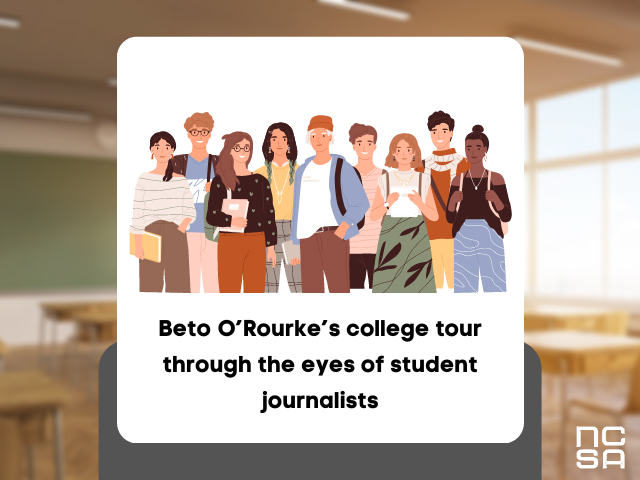