Most of the protesters, students and supporters of the Dream Act were freed Tuesday after their arrest on criminal trespassing charges for refusing to leave the offices of Sen. Kay Bailey Hutchison.

The 16 arrested protestors, including former City Councilwoman Maria Berriozabal and Methodist Minister Lorenza Andrade Smith, were demanding to speak to the senator and wanted her support for the DREAM Act.

The act would give citizenship to immigrants brought to the country illegally when they were minors if they finished two years of college or military service.

“Our lives are on the line and they are acting like it’s nothing. We’re not going to take no for an answer,” said Lucy Martinez, one of five students called “dreamers” from the University of Texas at San Antonio on a hunger strike, now in its 21st day.

“For me, the hunger strike was very much an embodiment of the issue,” said hunger striker Yasmina Codina. “Not only were we trying to put pressure on Hutchison, but we were continuously, 24 hours a day, seven days a week, reminded in our bodies of what was going on.”

Around the nation, more than 100 DREAM Act supporters have joined the UTSA hunger strikers.

The protest began at 3 p.m. Monday as students entered the senator’s office at 3133 General Hudnell Dr. and asked to speak to her. She was not there.

In English and Spanish, the protesters chanted: “Senadora Hutchison escucha, estamos en la lucha!” and What do we want? Dream Act. When do we want it? Now!”

Hutchison, R-Texas, has said she doesn’t support the bill in its current state because it goes beyond “the children who grew up in the U.S.”

At 5 p.m., with no word from Hutchison, supporters formed a human chain in front of her office, chanting “Education for all, not for some” and said they weren’t leaving until they heard from the senator.

Staff from Hutchison’s office said the senator had called to say she didn’t want the protesters arrested. But owners of the building, the Port of San Antonio, wanted the demonstrators removed, police said.

Shortly before 9 p.m., six hours after the protest began, police came to the building and told the demonstrators to leave or be arrested.

According to county records, all those arrested face criminal trespass charges and were released on bonds ranging from $800 to $1,000.

Afterward, Hutchison issued a statement saying she appreciated the “students’ passion,” but that they should find a “more peaceful way to voice their opinion.”

The issue has been heating up because a new Republican majority is set to take control of the House, and advocates want the White House and Democrats to take action before then.

The Dream Act, which means Development, Relief and Education for Alien Minors Act, was first proposed in 2001.

In Texas and the nation, most Republicans are against it, including Sen. John Cornyn and Rep. Lamar Smith, R-San Antonio.

All face criminal trespass charges and were released on bonds ranging from $800 to $1,000, according to county records.

Following the arrests, Esperanza Peace and Justice Center organized a vigil outside the Magistrate and Detention Center on South Frio Street. More then 20 supporters, friends, family and other hunger strikers waited in the dropping temperatures until the detainees were released around 8:30 Tuesday morning.

View photos from the protest and vigil in the slideshow below, or go to our Flickr photoset.

Heather DiMasi contributed to this story. Edited by Susana Hayward. 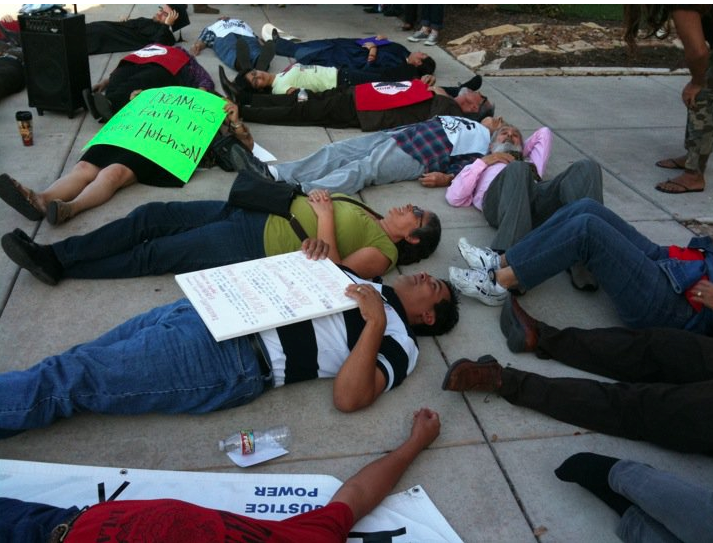